The following is an excerpt from Soka Gakkai President Minoru Harada’s speech on Jan. 7 in Tokyo during the First Soka Gakkai Headquarters Leaders Meeting opening the Year of Hope and Victory. The text appeared in the Jan. 18 issue of the Seikyo Shimbun, the Soka Gakkai’s daily newspaper.

Congratulations on holding the First Headquarters Leaders Meeting as we set forth toward the Soka Gakkai’s centennial in 2030.

Amid the difficulties in the face of the COVID-19 pandemic, you organize meetings online, encourage your members and engage in all your faith activities to the utmost of your abilities. Thank you very much indeed!

The Year of Hope and Victory has dawned at last. Nothing surpasses the “fountain of hope” and “compass to victory” that Nichiren Buddhism and Ikeda Sensei’s guidance provide. The New Human Revolution features numerous passages in which Sensei offers encouragement to members who are struggling to recover after being struck by disaster.

One such example occurred in July 1972, when floods from record rainstorms exacted a heavy toll on lives and property [in Japan]. At the time, Sensei was in the Tohoku region to encourage members, and group photo sessions were planned in each prefecture. However, because Akita (in Tohoku) was hit hardest by the flooding, the photo session there had to be canceled.

I was part of the group accompanying Sensei at that time, and when we asked how he wanted to reorganize his Tohoku itinerary following the session’s cancellation, he replied without a moment’s hesitation, “The photo session may have been canceled, but I’m still going to Akita.”

We protested, citing that the flooding had caused extensive damage in the area.

However, Sensei sternly replied: “All the more reason to go! Members there are … feeling despair at the disaster. At such times, it’s important to go to the place where people are struggling the most, no matter how difficult it may be. That’s the role of a true leader. If we don’t encourage members when they are in their darkest moments, when do we encourage them?” (The New Human Revolution, vol. 16, p. 185). 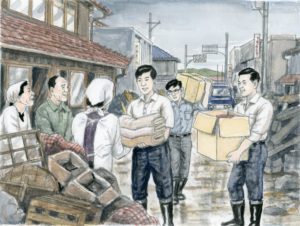 When members face deep struggles, it is crucial that we act quickly to offer encouragement and support. Illustration by Seikyo Press

When we arrived in Akita, Sensei not only supervised the relief effort but also took part in a hastily organized rally for local members, pouring his entire being into encouraging them.

The guidance Sensei gave then is just as readily applicable for all of us today:

The important thing is what you do from now. Are you going to be discouraged and allow yourselves to fall into despair? Or will you regard this as an opportunity to show actual proof of our faith and rise up again courageously, determined not to be beaten? Your inner resolve is what decides your happiness or unhappiness. …

We are all Bodhisattvas of the Earth who possess the life state of Buddhahood and who have appeared in this world to lead all people of the Latter Day of the Law to enlightenment. We will never be deadlocked. Unhappiness is not caused by adverse circumstances; it is caused by our own despair and negativity. …

If all of you who have been adversely affected by this natural disaster are able to splendidly rebuild your lives, you will have turned poison into medicine and demonstrated the greatness of Nichiren Buddhism to society. That is the purpose of the struggle you are now encountering. (NHR-16, 201–02)

Hearing Sensei’s wholehearted encouragement, the dejected faces of the members began to shine with renewed hope. It is a scene that I will never forget.

Sensei feels exactly the same way today about his fellow members as we battle this extraordinary pandemic, praying for every one of us to triumph and waiting for us to prevail. That is precisely why we should reread with renewed effort his guidance, starting with The New Human Revolution, embracing it with our very lives as our mentor’s personal guidance to each of us.

Therein lies the ability to transform negativity into positivity, the inflection point in which we can turn poison into medicine.

The reason the Soka Gakkai is what it is today is due to the “faith dedicated to kosen-rufu” passed on from Nichiren Daishonin to our three founding presidents.

In his guidance, Sensei states:

What is important is our faith dedicated to kosen-rufu, to propagate the Law above all. In “The One Hundred Six Comparisons,”[1] Nichiren states, “The Law does not spread by itself—because people propagate it, both the people and the Law are respectworthy.” President Toda often admonished that practicing simply for want of benefits is a beggar’s faith. (tentative translation)

Let us make this Year of Hope and Victory a year of absolute triumph. Let us do so no matter the circumstances, never retreating before difficulty as we kindle the fire of hope within us in achieving complete victory in our personal lives and in our struggle to advance kosen-rufu.

Thank you very much.