The following is part one of two of an essay by Ikeda Sensei, which was originally published in the Jan. 19 issue of the Seikyo Shimbun, the Soka Gakkai’s daily newspaper.

Heavy snows have been falling in Japan since the beginning of the new year, especially in regions along the west coast. I would like to express my heartfelt wishes for the well-being of everyone living in the impacted areas. I am praying earnestly each day for the safety and security of our noble members everywhere.

In the last decade of his life, while enduring the heavy winter snows of Sado Island (in present-day Niigata Prefecture) and Mount Minobu in Kai Province (in present-day Yamanashi Prefecture), Nichiren Daishonin persisted in his struggle to spread the Mystic Law and ensure its eternal transmission into the future.

One winter was so harsh that the older residents in his area attested that there had “never been a winter as cold as this” (“A Harsh Winter Deep in the Mountains,” The Writings of Nichiren Daishonin, vol. 2, p. 806). The Daishonin also writes that the snow “piled up to a height of ten feet, twenty feet, or five feet even in shallow places” (WND-2, 806).

In another letter, he praises a disciple who had offerings delivered to him despite the heavy snowfall: “You had your messenger make his way through the snow to call on me. Your sincerity has no doubt been recognized by the Lotus Sutra and the ten demon daughters” (“No Safety in the Threefold World,” WND-1, 891).

Nichiren is most certainly aware of the efforts of our “uncrowned heroes,” the Seikyo Shimbun deliverers, and all our members who are braving snow and bitter winter winds while working for kosen-rufu and the welfare of society with dedication and wisdom.

To a disciple [the lay nun Myoichi] who remained undaunted even while experiencing hardship and sorrow, the Daishonin writes, “Those who believe in the Lotus Sutra are as if in winter” (“Winter Always Turns to Spring,” WND-1, 536).

Those with faith in the Mystic Law are as if in winter, but winter always turns to spring (see WND-1, 536). Faith in the Mystic Law gives us conviction in this unchanging Law of life, enabling us to resolutely take on winters of adversity and enjoy a springtime of good fortune and benefit.

On a cold winter day in January 1951, a time when my mentor second Soka Gakkai President Josei Toda’s businesses were in dire straits, I wrote in my diary: “When winter comes, spring cannot be far behind. Although it is the dead of winter, my heart races to think of spring close at hand. Whatever hardships I face, I must never give up hope.”

I fought fiercely day after day to support and assist my mentor. In the end, we overcame every obstacle to open the way for his inauguration as second Soka Gakkai president on May 3 of that year, ushering in a triumphant springtime of mentor and disciple.

On June 10, the following month, Mr. Toda established the women’s division, which he described in a poem as “a noble gathering like fragrant white lilies.”

It is said that the lily was also a symbol of hope in ancient Rome.

In these anxious and unsettling times, our sunny members of the women’s division, which celebrates its 70th anniversary this year, shine with a light of hope unmatched in warmth and brilliance. Let’s proclaim this to all the world!

And the younger members of the women’s division—the Young White Lily Generation—who are spreading the joy of value creation for the happiness of themselves and others, are flowers of hope of a new era. 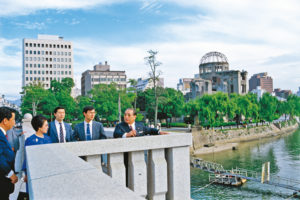 Because the Daishonin says, “Strengthen your faith day by day and month after month” (“On Persecutions Befalling the Sage,” WND-1, 997), I, as a youth, resolved to begin each new year with fresh, bold action.

I first visited Yubari in snowy Hokkaido on Jan. 13, 1957. Later that year, I fought alongside my dedicated fellow members there and secured victory in the Yubari Coal Miners Union Incident,[1] a confrontation with forces that threatened their religious freedom. I will never forget the history of shared struggle we created together.

I hear that Yubari has experienced nearly twice its average snowfall this year. I can imagine the difficulties this has caused for all those living there.

Members in Yubari and throughout Hokkaido have courageously overcome all manner of obstacles, including mining accidents, natural disasters, economic hardship, and their own or a loved one’s illness.

One sincere women’s division member shared that through studying the history of the Yubari Incident, she learned about the indignation of having one’s rights violated as well as the elation of winning in the struggle for justice. As a result, she said, she was able to smile and encourage her fellow members that, no matter what the situation, “Everything will be all right!”

Battling cancer herself, her words—“Everything will be all right!”—were neither simply wishful thinking nor empty words of consolation. Rather, they were an expression of her unshakable conviction that there is no problem that cannot be solved through prayer infused with a vow for kosen-rufu. As Nichiren states, “The greater the hardships befalling him [the practitioner of the Lotus Sutra], the greater the delight he feels, because of his strong faith” (“A Ship to Cross the Sea of Suffering,” WND-1, 33).

The admirable women’s division members of Yubari have put down solid roots in the place of their mission and chanted Nam-myoho-renge-kyo with powerful resolve to make their prayers permeate the land, reaching even the depths of the deepest mine shaft. They have dedicated their lives to realizing kosen-rufu and the Daishonin’s ideal of “establishing the correct teaching for the peace of the land.” This gives them tremendous pride.

Thanks to their efforts, wonderful treasures in the form of good fortune and capable successors are sure to continue emerging from their beloved city. During these present challenging times, the Yubari women’s division members—a gathering of Bodhisattvas of the Earth with the absolute conviction that “Everything will be all right!”—are spreading courage and hope throughout their community.

It was also in January 1957 that I made my first trip to Hiroshima, the eternal city of peace.

I arrived there after spending time in Kansai encouraging youth division members and then visiting Yamaguchi Prefecture where we completed the Yamaguchi Campaign.[2] On Jan. 26, I attended a kick-off meeting of Hiroshima District, which at that time belonged to Okayama Chapter in neighboring Okayama Prefecture.

Returning to Tokyo, I reported to Mr. Toda on the Yamaguchi Campaign and the energy of our Chugoku region members, including those in Hiroshima and Okayama. Mr. Toda smiled with delight at my news.

Eight months later (on Sept. 8, 1957), he issued his historic Declaration Calling for the Abolition of Nuclear Weapons.

And exactly 18 years after my first visit to Hiroshima, the Soka Gakkai International (SGI) was founded (on Jan. 26, 1975) with the guiding aim of realizing world peace.

On Jan. 22 this year (2021), just before we celebrate SGI Day, SGI’s anniversary, the Treaty on the Prohibition of Nuclear Weapons will come into force.

The voices of survivors of the atomic bombings of Hiroshima and Nagasaki, calling for such tragedies never to be repeated, have been a driving force in the adoption of this landmark international agreement.

Let us strengthen the solidarity of civil society for peace, starting from the peace cities of Hiroshima and Nagasaki. And let us pledge to make even greater efforts toward the realization of humanity’s great hope—a world without nuclear weapons.

Q: I often feel constrained by my boss, teachers and parents nagging me and wish I could just be free of all responsibilities in life. How do I overcome this?

Advancing Cheerfully on Our Shared Journey of Hope and Victory