World Tribune: Congratulations, Isamarie, on your recent appointment as a group women’s leader! We understand that there is an inspiring story behind this? 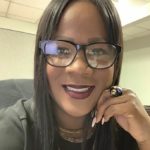 Isamarie Ortiz (group women’s leader, Tampa, Fla.): Yes, this was more than a 10-year journey. From 2009 to 2019, I had taken a break from my Buddhist practice, and during that time, my life was a mess. My dad passed away, and I got divorced and lost almost everything. On one very sad night, I started chanting Nam-myoho-renge-kyo in tears and determined to transform my life.

Mystically, an SGI-USA leader contacted me shortly after to see how I was doing and if I wanted to get reconnected to a district. After all those years, I was never forgotten about. I will always remember that day because that was when I decided to return to the SGI; that was the start of my human revolution.

I recently emailed this leader to express my sincere appreciation for contacting me two years ago. I never thought I would be capable of helping others, but I am so thankful for the care that I’ve received in the SGI and now want to help others who are hopeless and suffering become happy.

I am also planting many seeds of Nam-myoho-renge-kyo by talking to everyone I know about Buddhism. Even my very Catholic cousin in Puerto Rico joined our Women’s Introduction-to-Buddhism Zoom Meeting in February!

WT: That’s so heartwarming to hear! How has your experience been since returning to the district?

Ortiz: The district is like my family and has helped me become the person I am today. When I faced my most recent difficulties, the district guided me back to “faith, practice and study” so that I never lost hope.

On July 3, 2020, I was diagnosed with COVID-19. Because the virus attacked my upper respiratory system and throat, it became very difficult to chant. My doctor was so afraid that the virus would attack my lungs. I panicked, but after receiving encouragement from my family and seniors in faith, I determined to overcome the illness. My district leader called me every day to support me. Sometimes while sitting in front of the Gohonzon, I could only chant silently while putting my hand to my throat.

On July 31, my COVID-19 test came back negative, and I won over this battle. I am very appreciative of my district for helping me overcome this and chanting with me for a fast recovery.

WT: What a tremendous feat!

Ortiz: Yes! However, that same day, a supervisor at work called me to say he was going to suspend me because I had exposed everyone at the workplace to COVID-19. He was accusing me of something that I had no control over, and I felt heartbroken and defeated to the point that I was about to resign. I knew I was dealing with my own fundamental negativity that was telling me to look for another job, so I started chanting wholeheartedly to win where I was and change poison into medicine.

WT: What happened next?

Ortiz: Once I decided that I, Isamarie, would be the one to change first, I became determined in front of the Gohonzon and felt my daimoku [chanting Nam-myoho-renge-kyo] penetrating my life. I focused on making causes for kosen-rufu, including enrolling in Sustaining Contribution.

Weeks later, I started seeing changes in my work environment. The person who accused me was fired, and another person who was known for mistreating employees resigned. That same week, my new boss called me to express gratitude for everything that I had done for the company and promoted me to the position that I had wanted for more than a year! I then understood that this process was a necessary part of my human revolution and the key to changing poison into medicine.

What is the meaning of my struggles?