The Rev. James Lawson is an American Civil Rights leader and longtime ally of Martin Luther King Jr., who praised him as “the leading theorist and strategist of nonviolence in the world.” At age 92, the Rev. Lawson continues to give lectures and hold seminars on nonviolence. In the following interview, published in the Jan. 1 issue of the Seikyo Shimbun, the Soka Gakkai’s daily newspaper, he discusses the current state of our country and the world, the spirit of the Civil Rights Movement and his expectations for the SGI.

Seikyo Shimbun: With the COVID-19 pandemic, the growing awareness of racial injustice brought by the Black Lives Matter movement, a contentious presidential election and various other events, last year was a tumultuous time for American society and the world. Divisions among people seem to be growing more and more serious. What do you think is the cause of this?

The Rev. James Lawson: The first thing we need to understand is that there is a problem with the very idea and structure of Western civilization. In the 16th century, Western civilization crossed the sea with guns and soldiers and conquered the world. And they transmitted a kind of notion that “violence is the greatest force on Earth and creates the greatest change.” As you know, Karl Marx came along in the 19th century, saying that “revolution is violence.”

I believe that the root of racism, sexism and “plantation capitalism” lies in the violent soil of this Western civilization, which pursued only its own wealth. Today, many people have false preconceptions of “others” and lost their reason and compassion.

To be a human being, you have to learn to reject despising other human beings and have compassion for them. You have to recognize that they have the same human gifts that you have and acknowledge it.

The division of American society shows that many people are losing sight of this way of being human and have a hole down the middle of their souls. Both Blacks and whites must heal the wounds of their souls. The recovery of the human soul is a challenge for the world’s religions.

Seikyo: The American Civil Rights Movement was a historic movement in which people stood up for equal rights, regardless of race. What was the main force behind it?

Lawson: The first reference to “civil rights” can be found in the Civil Rights Act of 1866. After the Emancipation Proclamation and the Civil War, this bill was finally enacted and gave Blacks equal rights just like other Americans.

Thus, the battle for civil rights has a long history. And I call the 20th century Civil Rights Movement the “nonviolent movement of America.”

When I was in elementary school, I lost my temper and smacked a white child who had insulted me with racist epithets. Learning all about it, my mother confronted my anger and said, “Violence is absolutely not allowable.” She also said, “The way of God, the way of Jesus, is the way of finding a better way.”

I have been looking for that “better way” ever since. There was a time when I refused to serve in the Korean War and was imprisoned for more than a year. I was determined never to obey laws that led to any forms of violence and discrimination. 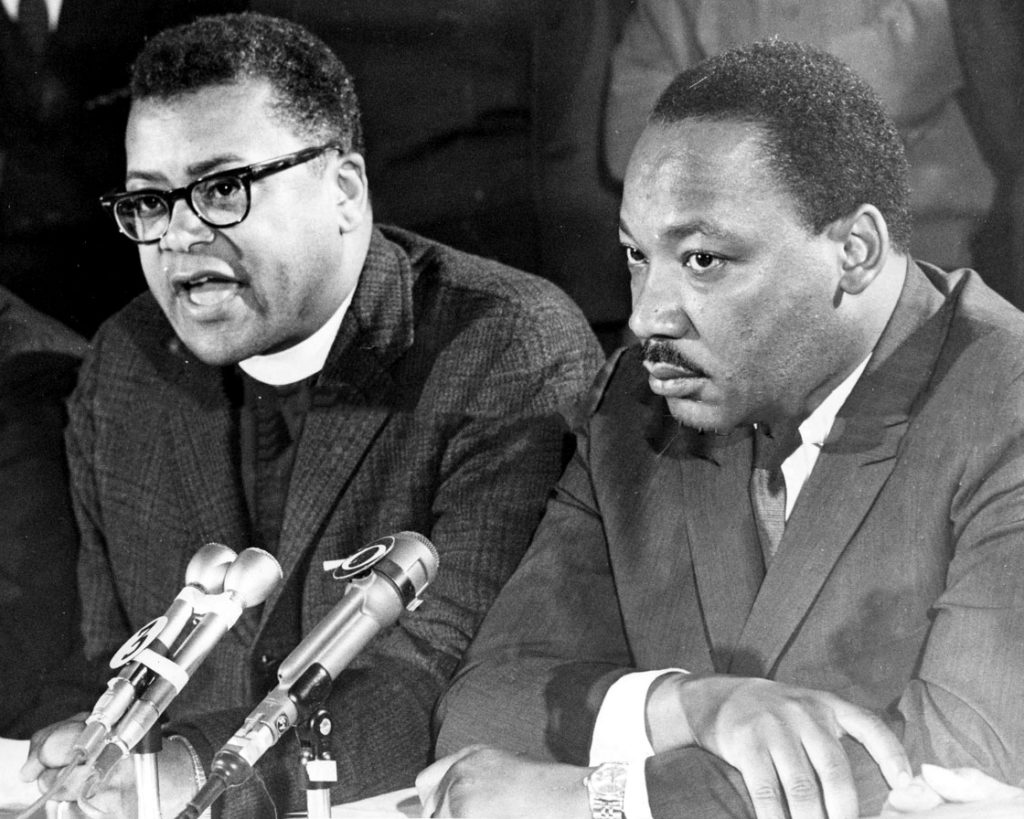 In the 1950s, I studied Mahatma Gandhi’s nonviolence philosophy. The greatest power of humankind is not violence but the power of nonviolence. This was his point.

Love is the energy that nurtures human beings. It is compassion that allows us to create societies in which everyone has access to life itself. Such nonviolent ideas can also be found in world religions and some ancient scriptures.

Martin Luther King Jr. and I led the movement with this nonviolent thought, as he stated, “An injustice anywhere is a threat to justice everywhere.” We demanded that liberty, equality and justice become the core virtues of our country.

In this way, the nonviolent movement caused phenomenal social transformation. It was very much like the revolutionary period, which produced the Declaration of Independence. For the first time in history, America was transformed not by violence but by nonviolence.

The greatest power of nonviolence is to fundamentally transform people’s minds and lives. I have seen with my own eyes many people who went through such conversion, as if they were beginning to walk from darkness into the light.

Personal transformation will change the family, society, the nation and the world. This is also a philosophy of nonviolence.

As a nonviolent practitioner, I want to emphasize the importance of dialogue. Dialogue is the most important tactic of social justice. Face-to-face dialogue will help people walk through the personal conversion that allows them to join a union. We can spread the wave of change from here to politics and the economy.

Seikyo: In 1960, Daisaku Ikeda made his first visit to the United States, where he launched a global campaign for peace and human rights. At that time, the American Civil Rights Movement was also taking place. We could say that there’s a historic bond between the SGI and the nonviolent movement. The SGI has now expanded to 192 countries and territories and is striving for grassroots dialogue that transcends racial and ethnic barriers.

Lawson: Gandhi, King and Ikeda have something very much in common.

First, they have a religious faith, a faith that has common elements.

Secondly, they have conviction that their faith has to be engaged through them in their personal work. They are reaching out to others with mercy and engaging in dialogue.

A third, of course, is that they committed their lives to realizing noble ideals. There is a common love of humankind.

I hope Dr. Ikeda will certainly continue the work he has been engaged in.

How many people do we need to change the world? Actually, we don’t need a majority of people. According to new scholarly studies, the world will change if 3.5% of people are committed to a nonviolent movement.

In Nashville, Tennessee, where I organized the sit-in campaign [1960], only about 5% of the population actually organized the cause. They changed the whole city and moved the entire country.

Here is an important lesson in 20th century history: The actions of a handful of people can change the minds of people all over the world.

All About Sharing Buddhism

Statement to 2022 NPT Review Conference Calling for No First Use of Nuclear Weapons (July 26, 2022)