[A] woman who upholds the Lotus Sutra is like pure water; the moon of Shakyamuni Buddha will reside there. (“The Buddha Resides in a Pure Heart,” The Writings of Nichiren Daishonin, vol. 2, p. 885)

My main childhood memories of my mother are of secretly talking to her by phone until my father made me hang up.

My mother had a psychotic episode when I was 5 years old and struggled with alcohol addiction, so my father got full custody of me. My father would only allow my mother to meet me in a public location for birthdays and holidays. We had to exchange gifts in my mother’s car.

When I joined the SGI in December 2012, my first prayer was to have a harmonious family, but transforming my relationships was not easy, especially with my father. He did his best to raise us, but he was emotionally unavailable, and I eventually built a wall around my heart to keep myself from getting hurt.

I tried to fill this void with chronic shopping and unhealthy relationships with men. Because my emotional needs weren’t met, I sought love and approval externally. I also had frequent anxiety attacks, which affected my daily responsibilities.

Through my Buddhist practice, I began to recognize the negative tendencies I had developed over the years and determined to transform them. My life changed in 2016, when I became a district young women’s leader and developed a practice for both self and others. I did my best to encourage the members and deepen my understanding of Buddhism by delving into Nichiren Daishonin’s and Ikeda Sensei’s writings. A year into my responsibilities, my friends began noticing how much I had changed and were inspired to learn about Buddhism. Since 2012, I’ve helped 13 people receive the Gohonzon.

In the process of sharing Buddhism with so many people, I learned how to open my heart to others. This led to a major breakthrough with my father. One day, my family gathered at my home, and I asked everyone to chant Nam-myoho-renge-kyo three times together. It was an incredible feeling, but afterward, my father kept saying negative things about the family. I reprimanded him, saying, “We don’t do that in this house.”

I was shocked at myself because I had never stood up to him. Surprisingly, he responded by bursting out, “Let’s do that chant again!” We then chanted for 15 minutes. Afterward, some of us were in tears, embracing one another.

My father, stepmother and two of my sisters have since joined the SGI-USA and begun their own journey of human revolution. Recently, my father said to me: “Jermira, you have a lot of wisdom. I really respect you.” My prayer for a harmonious family is being actualized.

There was still a family member I had not reconciled with: my mother. She passed away in September 2010, and I felt guilty for not being there in her final days.

Throughout 2020, I chanted abundantly each day, determined to transform from a closed woman to the most emotionally available woman in the world. On March 8, 2020, right before the lockdown, I helped one friend receive the Gohonzon. Since then, I’ve helped 11 friends begin chanting consistently. 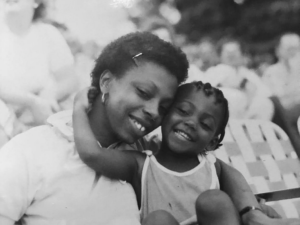 Jermira Trapp at age 3 with her mother.

In December, my sister gave me a special gift: a picture of my mother and me at 3 years old. When my mom passed away, I never took her photos out because I was afraid of feeling guilt and shame. But when I looked at this photo from my sister, I broke down in tears, releasing the deep pain that I had stored away in my heart all these years. For the first time, I proudly put up this photo of my mom and me.

I now look at the photo each day and smile, filled with appreciation for everything I’ve been through and for my mom for bringing me into existence. I even say, “Good morning, Mommy!” This inner transformation has led me to recall wonderful memories that I had buried; for example, being a little girl and hearing my mom play Luther Vandross’s “A House Is Not a Home” over and over again.

My Buddhist practice has empowered me to see the true aspect of my life, my Buddhahood, which has enabled me to overcome the shame and guilt that forced me to put up walls around my heart. My efforts to chant, study, share Buddhism and seek guidance from good friends in faith have been the tools to tear down those walls.

Toward 2030, I’m determined to help many more people develop inner peace and happiness, as this is the only path to developing a just society. I want to use my own healing and Buddhist practice to empower those who feel the most oppressed. I truly feel that this is the time for the Bodhisattvas of the Earth to propagate this Buddhism and shift society at its roots.

Nothing Can Stop Me From Fulfilling My Mission

We Make the Impossible Possible