In Santa Fe, New Mexico, the oldest U.S. capital, the area is so steeped in Native American and Spanish culture that its largest monument may be the city itself.

For centuries, generations have been raised in the adobe dwellings dotting the foothills, enveloped by breathtaking landscapes and a familial charm that lures visitors, artists, fine-art collectors and retirees year-round.

For the members of Northern New Mexico Chapter, the pandemic has been a time to fundamentally reset the way they carry out kosen-rufu activities in this Southwestern mainstay. The chapter, in turn, has naturally expanded its active membership, publications subscriptions and sustaining contribution, all benchmarks of a healthy organization.

What sparked their growth? We gleaned four lessons from their journey.

1. Everything starts with a determination.

At the end of 2019, the chapter leaders got together, and each person made a fresh determination to unite and share the same heart as Ikeda Sensei based on this guidance in volume 1 of The New Human Revolution:

[Second Soka Gakkai President Josei] Toda declared that the Soka Gakkai organization was even more precious to him than his own life. This is because our organization is the lifeline of kosen-rufu. We can think of it as a water-supply system. If the system is in perfect working order, then we only have to turn the tap to get pure, fresh water. …

The Soka Gakkai organization, therefore, may be called a ‘water-supply system of faith’ in that it supplies people with the pure energy of faith and nurtures their capabilities. If the leaders who play key roles in the organization lose their seeking spirit, they will be like pipes disconnected from the water source. Also, if the hearts of leaders are impure, then only dirty water will flow through the pipes. (revised edition, pp. 299–300)

Alexis “Bunny” Byfuglin, a vice chapter women’s leader who returned to her hometown after her husband’s retirement, said the ditches in Santa Fe called acequias have historically carried water throughout the different communities of New Mexico.

“The communities get together and clean the ditches from time to time so that fresh water can run through them in order to plant the fields,” she said. “I knew that that’s what we had to do. Cleaning the ditches for us meant bringing the voice of Sensei and uniting with the organization. This brought fresh energy and creativity of faith to the members of Santa Fe.” 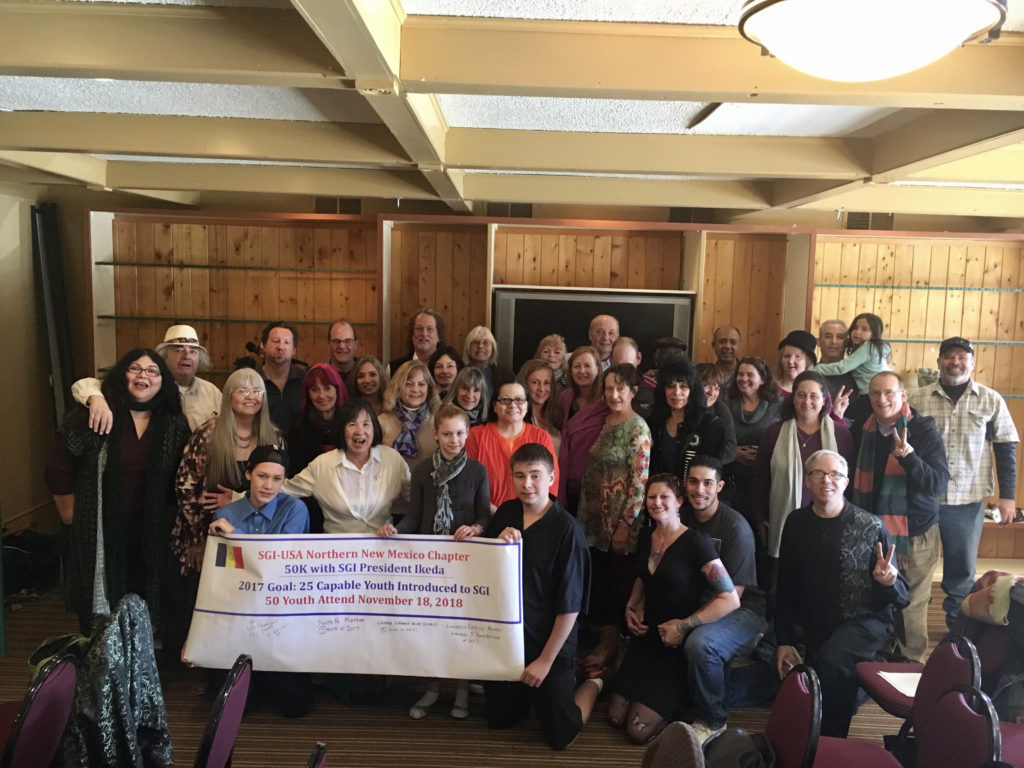 Margaret Burke, the chapter women’s leader, said that the first step was to get an accurate understanding of who was in their chapter.

The chapter team reviewed their membership list and wrote cards to each person, especially those they hadn’t heard from in a while. Each card included a personal note and guidance from Sensei.

They prayed to make a connection with each person and took note of the cards that were returned. From there, they continued to visit each member to strengthen their bonds of trust and friendship, and encourage each other in faith.

In every interaction, whether virtual or HOMS (healthy, outdoor, masked and socially distanced), the leaders brought their copies of the World Tribune and Living Buddhism.

Ms. Burke said that there were many members who had been practicing for a long time but were not subscribing to the publications. “We shared that these are their personal letters from Sensei,” she said. “We encouraged them that this is the greatest gift you can give yourself.” Naturally, over the last two years, the chapter has nearly doubled the number of members receiving the publications.

While it’s easy to feel limited in a Zoom environment, there is no limit to the power of the heart. Bob Kristy, chapter men’s leader, said that despite the meetings being virtual, “open, honest, authentic communication and dialogue have been the key.”

As a result, the members have built a deeper sense of unity and trust, and a greater sense of community. “In the beginning, we were all wondering how to figure out this Zoom environment, but I attended a district meeting the other day that was more joyful than it has ever been!” Mr. Kristy said. “Everyone participated.”

The chapter leaders also began praying to connect with and awaken the members of their chapter to their great mission as Bodhisattvas of the Earth based on this guidance from Sensei:

I pray for your health and long life, and for your success in all endeavors. … I hope you will all pray, too. Pray that instead of devils or negative, destructive forces infiltrating your being, Brahma, Shakra and the gods of the sun and the moon—positive, protective forces of the universe—will enter your life! Pray that they will enter the lives of all members in your region and the entire membership of the SGI, as well. If you do this, your strength will multiply a hundredfold, a thousandfold. With such prayer, with such faith, you will be able to realize a fundamental transformation in the very depths of your life. It is the secret to achieving your human revolution. (Jan. 10, 2014, World Tribune, p. 5)

“If we pray this way, we can win in everything,” Ms. Byfuglin shared. “We will transform everything. Let’s pray like Sensei.”

Many more members have since shared their faith experiences. With more conviction in the power of their own prayer, their lives have blossomed. “Just give them a little bit of this beautiful organization and people will grow naturally,” she said. “We are barely scratching the earth. Now it’s their turn. It’s time for successors.”

‘The Power of Dialogue’