Hurricane Ida hit Louisiana on Aug. 29, 2021, 16 years to the day after the landfall of the devastating Hurricane Katrina. SGI-USA Central Territory Leader James Herrmann spoke with the World Tribune about the incredible strength of the local members and the SGI-USA’s disaster relief efforts in New Orleans.

World Tribune: Thank you for speaking with us about the SGI-USA’s response to Hurricane Ida.

James Herrmann: Thank you very much for the opportunity. For decades, SGI-USA has had the policy of storing relief supplies in strategic locations throughout the country in order to respond to our members as quickly as possible. Whether the disaster is a wildfire, hurricane or tornado, in most cases, we reach our members before local government or federal aid is mobilized. 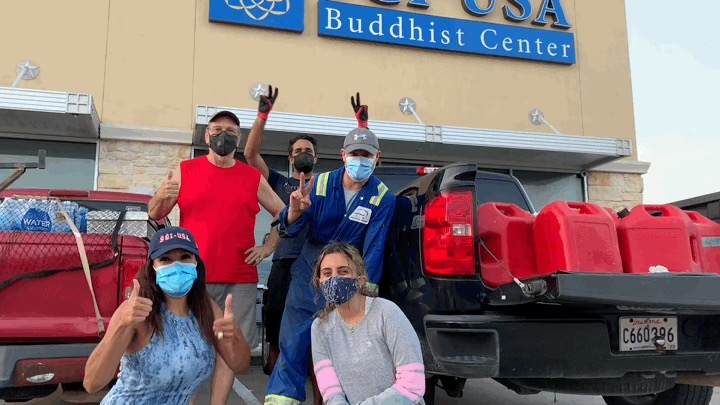 Unity—SGI-USA members overcome the devastation of Hurricane Ida through their united prayers and swift action. Despite incurring property damage and lacking daily necessities, they are determined to create the most value from this challenge.

WT: Can you share how the SGI-USA responded to this particular event?

Herrmann: On Aug. 29, we held an emergency meeting with local leaders to clarify communication protocols and reporting. Exactly 16 years to the day after Hurricane Katrina hit, Ida made landfall as a Category 4 hurricane with 140 mph winds. The next morning, one local leader confirmed that the newly renovated New Orleans Buddhist Center had now survived its second major hurricane and had no damage. We quickly initiated our established protocols and immediately realized no one had power, phone service, mobile service or internet. In some cases, they didn’t have water. Ikeda Sensei sent a message to all the members. We assigned five staff members from Central Territory to begin confirming the status of each of the 858 members and communicate Sensei’s message to them. This proved to be very challenging. But after three days and 120 hours of consistent calls, emails and texts, communication slowly started coming back.

WT: What sort of responses did you receive?

Herrmann: Members shared their whereabouts by email, calls and texts. Some evacuated, while others remained at home and were able to communicate after charging their phones in their cars. There were no personal injuries reported. Although many did incur property damage, they all felt completely protected! One women’s leader said, “We have changed our karma in New Orleans from Katrina.” She said she believed this was due to the abundant daimoku chanted by the members of Central Territory and across the country. Two local zone leaders evacuated to Hattiesburg, Mississippi, about 2 hours away, but commuted back to New Orleans every day to support the members! Despite their own personal challenges and having no electricity in the sweltering heat and humidity, the local leaders dedicated each day to serving the members from 8 a.m. to 7 p.m., before the city-instituted curfew at 8 p.m.

WT: Could you tell us about some of the members you visited? 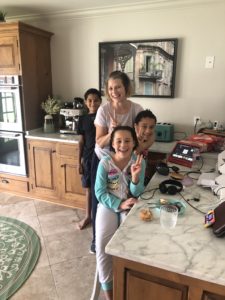 Herrmann: One woman, a single mom, decided to ride out the hurricane at home with her two sons. Her eldest looked out their back window and saw a large tree swaying and insisted that they leave. After evacuating, she returned home the next morning to find that the 150-year-old pecan tree in her backyard had fallen on her house and crushed her bedroom! Her son said he was happy that his mom listened to him this time. She vigorously fist bumped me and said: “Don’t worry. We will be perfectly OK. My Gohonzon room is perfect! Sensei’s picture on the wall didn’t even move! We will be fine! We will win!” Another local member, an elderly woman who lives in an urban area of New Orleans, stayed at home as well. Like everyone else in her neighborhood, she had roof damage and no electricity. Many people in her community do not have access to a car or other means to get to the National Guard relief locations to receive aid. Seeing this, she started driving her neighbors one by one to get ice, water and other relief supplies. She also cooked everything from her powerless refrigerator before the food spoiled and distributed the meals to her neighbors.

Herrmann: I joined the South Central Zone kosen-rufu gongyo meeting on Sept. 5 and can confidently report that the members of Louisiana-Mississippi Region and South Central Zone are determined to continue changing poison into medicine through stronger member care and widely expand their efforts in Buddhist dialogue!

The Causality for Victory in Life

This Month in Soka Gakkai History