Mountains elevate us to greater heights,
and once we have reached the summit
our horizons expand,
our view completely unobstructed,
and from this highest seat,
we all become friends. 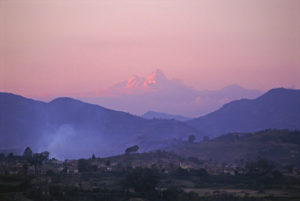 The Himalayas photographed by Ikeda Sensei during his visit to Nepal, Nov. 3, 1995. Photo by Daisaku Ikeda.

The Himalayas—the world’s highest mountain range, closest to the heavens and uniting humankind.

The 26,000-foot peaks glimmering silver with snow run through Nepal, situated in the heart of Asia, like a procession of great monarchs. The highest of them, Mount Everest, is called Sagarmatha in Nepali, meaning “one whose head touches the sky.” Its summit does indeed seem to reach the heavens. Communing amicably with the sun, the moon and the stars, it endures bitter cold and harsh winds while gazing upon the world with dignity and majesty.

“Where are your friends?
Who go with you?
Which land is your home?
What place do you seek, Traveler?
With what news do you roam?”
“My friend is decent diligence. Courage comes
with me.
The whole world’s my home. To heart-land
I roam with hues of Humanity.”[1]

Let us, too, in scaling the peak of our personal mission, take courage as our companion. With the vast spirit to regard the entire world as our home, let’s spend our days serving humanity in our own unique way.

Chomolungma, meaning “Goddess Mother of the Land,” is the Tibetan name for Mount Everest. A mother’s love is like a mountain towering in the lives of her children and guiding them throughout their lives. I met and spoke with Kedar Bhakta Mathema, former vice chancellor of Tribhuvan University and former Nepali ambassador to Japan, on numerous occasions. He once told me that the person who instilled in him a strong sense of values was his mother, and that he regarded her as his finest teacher.

Mr. Mathema’s parents and relatives fought for the Nepalese people when the country was ruled by a dictatorship, and his uncle was executed by the regime. His family’s property was confiscated, and they were forced into exile in India for nearly three decades. It was during that period that Mr. Mathema was born.

While living a life of great hardship in India, his mother, an eternal optimist, warmly welcomed and cared for fellow exiles arriving from Nepal. She always taught her son to think of others first and that one’s happiness must never come at the expense of others. She worked hard and raised him devotedly, warning him not to be influenced by power and money.

When Nepal later became a democratic republic (in 1990), the nation’s leaders pressed Mr. Mathema to quit his post at the World Bank and help rebuild his homeland. Doing so would mean choosing a very difficult path. But his mother and his wife encouraged him to take on the challenge, for the sake of the country and the welfare of the people, assuring him that he had their full support and that they would look after the family.

A person’s true greatness is determined by how lofty their ideals are and their dedication to working for the well-being of others and society.

In an interval in my schedule [during my visit to Nepal in 1995], local members took me by car to a hill outside Kathmandu, saying that if conditions were right we might be able to see the Himalayas. As if in answer to their prayers, the mountains appeared against the glorious sunset, and with a feeling of reverently greeting them with “Namaste,” I took several photographs. 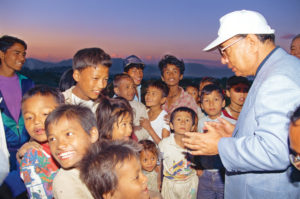 A group of perhaps 30 children were looking at us curiously from afar. I called them over, and they gathered around me with sparkling eyes and happy smiles.

I said to them: “This is the land where Shakyamuni Buddha was born. He grew up looking at the great Himalayas. He strove hard to become a person like those mountains. He made himself into a mighty champion. You are just like he was. You are living in an amazing place. You can become great people, too.”

My interpreter conveyed these words to the children, and we went on to have a pleasant, heart-to-heart exchange. When it was time to leave, they all waved energetically as we said goodbye.

A Nepali proverb says, “As long as we have life, there is hope.” It is telling us that life is hope, and hope is life.

Children grow up observing their mothers. Mothers who always believe in themselves, in others and in their children keep hope alive in their children’s hearts. Whatever others might do or say, for the sake of the future and the children, please live proudly and positively ever true to yourselves.

I composed this poem for a young Nepali friend:

May the great land of Nepal
enjoy eternal peace!
May my friends in Nepal
enjoy days of success and harmony!
My very best wishes
to your parents!

This installment of the series “Unforgettable Journeys” features excerpts from Ikeda Sensei’s essay on Nepal originally published in the Soka Gakkai-affiliated monthly magazine Pumpkin and later in book form in Japanese. This was translated from the Nov. 20, 2020, issue of the Soka Gakkai’s daily newspaper, Seikyo Shimbun.

The Future Begins With America