May new horizons
shine before you
on your journey.

There is a Hawaiian saying of which I am very fond: He ola i ka leo kahea, meaning “There is life in a [hospitable] call.”[1]

Nothing warms the heart more than words filled with kindness and care.

Hawaii’s wonderful greeting “Aloha” is familiar to all around the world. It is as beloved as the famous Hawaiian spirit of hospitality.

“Aloha” is used for both “hello” and “goodbye.” Brief as it is, the word is rich in meaning, expressing love, kindness, empathy, acceptance and compassion, as well as gratitude and respect for the people and the natural environment that have nurtured us. 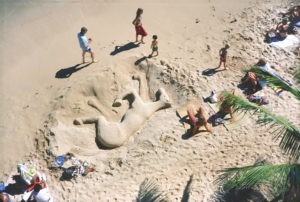 The aloha spirit is encapsulated in the so-called Aloha Chant, which translates in English to the effect:

Gentle are the people of Hawai’i
Working together in harmony
Pleasant are their thoughts
Humble are their ways
Patience will bring victory!

If we make our journey through life with this spirit of aloha, we can create a cheerful, warmhearted realm of happiness in even the darkest, coldest times.

[Editor’s note: Ikeda Sensei left Japan on his first overseas guidance tour on Oct. 2, 1960. The first place he visited was Hawaii, site of the Japanese attack on Pearl Harbor that ignited World War II in the Pacific. It was from there that he launched his global travels for peace.]

The first places I visited in Hawaii were Pearl Harbor and the National Memorial Cemetery of the Pacific, where I offered solemn prayers in memory of all those who were killed in World War II.

I also thought of how Japan’s surprise attack on Pearl Harbor triggered a period of great hardship and suffering for citizens of Japanese descent who had put down roots in Hawaii and other parts of the United States. It was only through tremendous perseverance and effort that they were able to regain the trust of people in their communities and society.

Nothing warms the heart more than words filled with kindness and care.

I renewed my personal vow against war and decided to do whatever I could to make Hawaii a front-runner of world peace.

Hawaii’s former governor George Ariyoshi—the first Japanese-American to be elected a state governor—and his wife, Jean, took great pride in the aloha spirit. Discussing his role as the leader of a state known for its cultural and ethnic diversity, he spoke of his father’s conviction that we all depend on and have a mutual obligation to one another—as expressed in the Japanese phrase otagai ni—asserting that it was his own philosophy as governor.[2] We can’t treat people like robots, he said, explaining that when we show respect for others’ efforts, we naturally encourage them to do their best.[3]

With vigor and insight, Governor Ariyoshi highlighted the qualities of gratitude, respect, sincerity and encouragement that will be indispensable for leadership from now on.

The Great Hanshin Earthquake took place early in the morning of Jan. 17, 1995. I was scheduled to deliver a lecture at the East-West Center in Hawaii on Jan. 26, and I delayed my departure until the day right before my speech so I could continue supervising relief efforts and encouraging those affected by the earthquake.

As I boarded the airplane for Hawaii, my mind was filled with thoughts of my dear friends in Kobe, Hyogo Prefecture and other parts of the affected Kansai area, which I had visited many times since my youth. I prayed intensely for their recovery and well-being.

The theme of my East-West Center lecture, which commemorated the 50th anniversary of the establishment of the United Nations, was “Peace and Human Security: A Buddhist Perspective for the 21st Century.” Part of human security is enabling each person to feel safe and spiritually fulfilled. This is achieved by promoting strong community ties, personal transformation and resilience. As I delivered my lecture, I thought of my friends who were struggling in the earthquake’s aftermath. People I met in Hawaii also expressed their concern for those in Kansai, sympathizing with their suffering as if it were their own.

Carrying with me their sincere prayers and good wishes, I flew directly to Kansai from Hawaii.

I continue thinking of and advancing together with my friends in Kansai and in Hawaii, who have risen to every challenge and have kept moving forward.

There is a Hawaiian motto that resonates with the famous Kansai resolve to never be defeated. At the end of the 19th century, Queen Liliuokalani, who also composed the famous song “Aloha ‘Oe” (Farewell to Thee), took a firm stance to protect her homeland from foreign takeover. Though she was eventually forced to abdicate, she shared her personal motto of “Onipa‘a” (Remain steadfast) with the Hawaiian people.

Touching on this spirit, Dr. Lou Ann Ha’aheo Guanson of the Spark M. Matsunaga Institute for Peace in Hawaii also stressed that courage and unshakable conviction are the most important things in life.

There is a Hawaiian saying, “‘Ole ua, ‘ole anuenue”—No rain, no rainbow. The rainbow of happiness only shines after the rain of suffering.

In Hawaii, the “Rainbow State,” children with unique personalities and diverse cultural backgrounds studying together are called “rainbow children.”

In the spirit of aloha, let us create big, bright rainbows of friendship, hope and victory in our lives and communities.

Walking
the rainbow path together
toward peace.

To Our Future Division Members, the Torchbearers of Justice—Our Hope for the Future