On Oct. 5, 1961, six decades ago, I set foot in Europe for the first time, filled with a powerful determination to open the way to a more peaceful world through widely spreading the principles of Nichiren Buddhism. The Berlin Wall, that potent symbol of Cold War divisions, had just been built two months earlier.

We had very few members in Europe at that time. That is why I treasured each person I encountered and continued to engage in one-to-one dialogue.

We affirmed that our efforts in Europe should focus on laying a solid foundation and slowly and steadily gaining trust and understanding for our movement.

Each of our members in Europe stood up with a sense of personal responsibility, embodying the spirit of “I am the Soka Gakkai!” They shared my determination to win over any daunting challenge that may confront us and marched proudly through the Arc de Triomphe of kosen-rufu.

Now, six decades later, our gathering of Bodhisattvas of the Earth in Europe exceeds 160,000 individuals. They are making noble contributions to society as model citizens, even under the constraints of the coronavirus pandemic. With their motto of “One Europe,” bridging a rich diversity of nations, they shine with the unshakable solidarity of “many in body, one in mind.”

Founding Soka Gakkai President Tsunesaburo Makiguchi, who studied the works of European thinkers, envisioned a future age of “humanitarian competition.” Second Soka Gakkai President Josei Toda, who lamented the conflicts dividing Europe, articulated the ideal of global citizenship, of humanity as a single global family. How overjoyed they would surely be to see the development of our movement in Europe today. 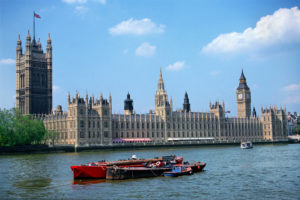 Renaissance—The Palace of Westminster, home to the Parliament of the United Kingdom, captured by Ikeda Sensei, London, May 1989. Photo by Daisaku Ikeda.

Denmark was the first stop on my first visit to Europe in 1961. On the day of my arrival, a youth division leader from Japan came to see me. He was an engineer in Europe on business and had taken time out of his schedule to do so. I was delighted by his seeking spirit.

I shared these words of Nichiren Daishonin with him: “You must not spend your lives in vain and regret it for ten thousand years to come” (“The Problem to be Pondered Night and Day,” WND-1, 622). Now is your time, I encouraged him, to undertake the work that is yours alone, to forge yourself as a person and accumulate eternal good fortune. He responded to my call and joined with fellow members to create a great mountain range of capable individuals in Hiroshima, the city of peace, and the entire Chugoku region.

When imbued with prayer, a single encounter, a single conversation with just one person can produce immeasurable value.

I fondly recall another occasion in Europe, 40 years ago (in June 1981). While riding on the Paris subway, I dictated a poem for a French youth division gathering that I was on my way to attend.[1] It contains the following verse:

Expanding our circle to embrace
many new friends,
brightening the hearts of all,
reviving the joy of all—
the aged, the suffering,
the seeking and the sad—
we move forward,
ceaselessly.

The youth of Soka in Europe, Japan and around the world are now carrying forth this torch of friendship, of spiritual unity, as they reach out to engage in dialogue with one person after another.

As the seasons change, please pay special attention to your health.

In my youth, Mr. Toda told me that the Bodhisattvas of the Earth are inherently robust and strong, and he urged me to pray with that deep conviction.

My wife, Kaneko, and I are chanting wholeheartedly for each of you, our precious members, to bring forth the powerful, robust life force of the Bodhisattvas of the Earth and vanquish all illness.

This essay by Ikeda Sensei was originally published in the Oct. 5, 2021, issue of the Soka Gakkai’s daily newspaper, Seikyo Shimbun.

Scaling a New Summit of Kosen-rufu Toward Our Centennial