On the occasion of the autumn equinox [traditionally a time for memorial services for the deceased in Japan], I offered solemn prayers for all our noble fellow members who in life strove for kosen-rufu, your deceased loved ones and those who have lost their lives in the coronavirus pandemic. I am also praying for an end to the pandemic and for the health and safety of all our members throughout the world.

In The Record of the Orally Transmitted Teachings, Nichiren Daishonin says that when we chant Nam-myoho-renge-kyo, “the ray of light from the daimoku reaches all the way to the hell of incessant suffering and makes it possible for [the deceased] to attain Buddhahood then and there” (p. 17).

Let us enfold our planet and all humanity in the warmth and brilliance of the Mystic Law’s compassionate light, which illuminates the three existences of past, present and future.

This year marks the 90th anniversary of the publication of Kachi ron (Theory of Value), the second volume of The System of Value-Creating Education, the great work of our founder, Tsunesaburo Makiguchi.

In it, Mr. Makiguchi clearly states that the social purpose of religion is to contribute to the happiness of humanity and make the world a better place.[1] He affirms that the goal of Nichiren Buddhism is to actualize the ideal of “establishing the correct teaching for the peace of the land”—that is, helping people become happy and building peace. And he asserts that Nichiren Buddhism is opening a path, transcending narrow sectarian bounds, that offers an unerring course for humankind in this Latter Day of the Law, an age characterized by philosophical confusion and social insecurity.[2]

In the summer of 1931, the year in which Kachi ron was published, Mr. Makiguchi traveled to Hokkaido, a place where he had spent his formative years, and gave lectures on education in Sapporo and Iwamizawa.

Mr. Makiguchi continued to meet and interact regularly with intellectual leaders of the day, including Inazo Nitobe [the Christian educator and agricultural economist who gained renown in the West for his book Bushido: The Soul of Japan]. He actively reached out to initiate friendships with all kinds of people, of many different beliefs and social positions, forging a movement for creating value. At the same time, he strove with his disciple, Josei Toda, who shared his vision, to lay the foundations for our Soka organization to take concrete actions toward realizing a peaceful world based on the life-affirming principles of Buddhism.

As Mr. Makiguchi and Mr. Toda[3] demonstrated through their own initiatives, making steady efforts to open the way forward is the sure path to victory. And in the Soka Gakkai organization, it is our noble frontline districts that propel our movement’s ever-victorious advance.

The landmark Osaka Campaign[4] kicked off from a solidly united district leaders meeting held at the beginning of 1956. Assembled before the Kansai Joju Gohonzon that bears the inscription “For the Prosperity of the Great Law and Fulfillment of All Prayers,” we together read Nichiren’s words: “I am praying that, no matter how troubled the times may become, the Lotus Sutra and the ten demon daughters [guardian deities of Buddhism] will protect all of you, praying as earnestly as though to produce fire from damp wood, or to obtain water from parched ground” (“Rebuking Slander of the Law,” The Writings of Nichiren Daishonin, vol. 1, p. 444).

Embracing this spirit, we united our prayers and vowed as genuine disciples of the Daishonin to open wide the path to achieving the impossible.

The Kansai men’s and women’s division district leaders, making my spirit and determination their own, sprang into action with great energy, and together we blazed a way forward through all obstacles. In the final chapter of the Lotus Sutra, Bodhisattva Universal Worthy vows to guard and protect the practitioners of the Lotus Sutra, to free them from suffering, to bring them peace of mind and to prevent devilish functions from taking advantage of them (see The Lotus Sutra and Its Opening and Closing Sutras, p. 361). He also promises to encourage them so they will be filled with great joy and strive ever more diligently in their Buddhist practice (see LSOC, 361). Lastly, he pledges to cause the widespread transmission of the Lotus Sutra throughout the entire world and ensure that it never comes to an end (see LSOC, 363).

Our men’s and women’s division district leaders are carrying out the vows of Bodhisattva Universal Worthy in the places of their mission, cherishing Nichiren’s words “I entrust you with the propagation of Buddhism in your province” (“The Properties of Rice,” WND-1, 1117). 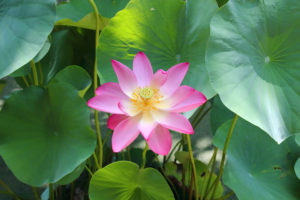 In September 1956, only a few months after the Osaka Campaign, Mr. Toda put me in full charge of the Yamaguchi Campaign[5] [which began the following month].

Everyone involved in that campaign was inspired by a lofty ideal.

Members flocked to Yamaguchi from across Japan to help make that ideal a reality. Burning with the wish to realize kosen-rufu, they overcame every obstacle to engage in dialogue aimed at opening new horizons in our movement.

When they became frustrated with their progress, I encouraged them, saying: “We can do it! We’re Bodhisattvas of the Earth with the mission of freeing people from suffering!” And we boldly went on to break through every barrier together.

From October 1956 to January 1957, I traveled to Yamaguchi three times, for a total of 22 days. In the course of our shared struggle, we increased our membership there almost tenfold and established numerous new districts.

Why were we successful in such a short period of time? Because we treasured each individual.

Mr. Toda often said that all it takes is meeting one person, having one person listen to what we have to say.

It’s not a numbers game. Everything starts from giving top priority to one-to-one dialogue and making a connection with each person we meet.

Discussion meetings, where we can interact more personally with fellow members, are the essence of the Soka Gakkai, and the districts are the home bases of our network of encouragement.

Our districts are castles of humanity nurturing and spreading friendship and trust in our communities. They are gardens of joyful harmony and beautiful diversity in accord with the principle of “cherry, plum, peach, and damson” (see OTT, 200).

“The district is the assembly on Eagle Peak”—with this conviction, I have striven since my youth to make our precious discussion meetings assemblies brimming with hope and energy.

In October 1960, at the height of the Cold War, I set off on my first overseas trip to pioneer the way for worldwide kosen-rufu, a photo of my mentor in my breast pocket. That effort, too, began with encouraging each person I met and establishing first one district and then another.

No matter what the times, our movement for kosen-rufu seeks to create a positive groundswell of individual happiness leading to revitalizing humanity, and a groundswell of our vibrant, harmonious districts contributing to the development of thriving peaceful societies.

I recall an unforgettable moment at a Soka Gakkai headquarters leaders meeting held in November 1979, at the Toda Memorial Auditorium in Sugamo, Tokyo. A 72-year-old greater block (present-day district) leader from Teuri Island, off the coast of Hokkaido, shared a wonderful experience. He ended it with a powerful pledge to continue working for kosen-rufu in his local community with unflagging passion and idealism. In tribute to his fighting spirit for kosen-rufu, I led “Song of Indomitable Dignity” at that meeting for the first time since stepping down as Soka Gakkai president.

Seven decades ago (in 1951), with youthful passion, I began a pioneering effort for kosen-rufu in the district I was in charge of [namely, Omori District of Kamata Chapter in Tokyo’s Ota Ward]. In my diary, I wrote many times of chanting to the Gohonzon for my district to become the very best possible.

Today, with that exact same spirit, my wife, Kaneko, and I are chanting strongly for each of our districts throughout Japan and around the world.

Golden pillars of the Bodhisattvas of the Earth,
leading with shared commitment,
may victory be yours!

For our women’s division district leaders:

Suns of Soka,
radiating good fortune and benefit,
may you ever dance and shine!

Together with our fellow members in our districts—united in the spirit of “many in body, one in mind” and burning with the pioneer spirit of the Bodhisattvas of the Earth—let us achieve new great triumphs for the happiness of all humankind!

These excerpts are from Ikeda Sensei’s essay that was originally published in the Sept. 23, 2021, issue of the Soka Gakkai’s daily newspaper, Seikyo Shimbun.

Stirring a Whirlwind of Dialogue to Awaken People’s Buddha Nature

The Causality for Victory in Life