Bodhisattva Never Disparaging appears in the 20th chapter of the Lotus Sutra and is highly regarded for deeply respecting everyone he encountered. Nichiren Daishonin expresses that Never Disparaging’s practice of revering everyone is the “heart of the Lotus Sutra” and is the essential behavior that we should strive to embody (see “The Three Kinds of Treasure,” The Writings of Nichiren Daishonin, vol. 1, pp. 851–52).

In the following excerpts from The New Human Revolution, vol. 25, Ikeda Sensei talks with members during the 1956 Yamaguchi Campaign about how the spirit of Bodhisattva Never Disparaging applies today to sharing Buddhism with others—an essential part of our Buddhist practice. Sensei appears in the novel as Shin’ichi Yamamoto. 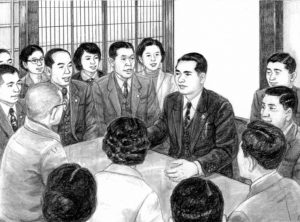 Ikeda Sensei speaks to members of Yamaguchi Prefecture about the importance of sharing Buddhism with others, likening it to the spirit of Bodhisattva Never Disparaging, who showed respect to every person he met. Photo by Seikyo Press.

[Shin’ichi Yamamoto urged the members]: “We may tend to feel disappointed and dispirited if, despite how earnestly we share Buddhism with someone, they don’t take faith. But the benefits obtained through letting people hear the teaching and leading people to arouse faith in the teaching are the same. The important thing is to speak out and share the correct teachings of Buddhism.

“You all know about Bodhisattva Never Disparaging. Our propagation efforts to plant the seeds of Buddhism are the modern-day equivalent of his practice. Isn’t that amazing?”

Bodhisattva Never Disparaging believed that all living beings possess the Buddha nature, and, so saying, he knelt placing his hands together in a gesture of reverence.

“The point is just to keep sharing Buddhism, with conviction and in high spirits. All those efforts will be transformed into benefit and good fortune, a force for transforming your karma.”

But people reacted to his words with anger and hatred. Disbelieving what he said, they defamed and cursed him, set upon him with sticks and staves, and threw roof tiles and stones at him.
Still, Bodhisattva Never Disparaging said, “I have profound reverence for you,” and continued to show respect for his attackers. He never stopped bowing to them.

The sutra teaches that those who disrespected and attacked Bodhisattva Never Disparaging at that time spend a thousand kalpas in the hell of incessant suffering, but in the end, because of the connection that they had made from hearing the Mystic Law from him, they were able to attain Buddhahood. (The New Human Revolution, vol. 25, pp. 110–11)

Those who hear the teaching of the Mystic Law may not accept it immediately. They may reject it, stirring greed, anger and foolishness in their hearts, leading them to persecute the person who taught them. Through having heard the Law, though, a connection to Buddhism has been forged in their lives, and the seed for attaining Buddhahood has been sown within them.
This is why Nichiren Daishonin states, “He [Never Disparaging] nevertheless persisted in his effort, ‘preaching to them forcefully, though it angered them,’ an action that arose from his feelings of pity and compassion” (The Record of the Orally Transmitted Teachings, p. 164).

Shin’ichi said to the members participating in the Yamaguchi Campaign: “Whether a person who has heard about Buddhism chooses to practice it or not is up to them. What matters is how many people we’re able to share Buddhism with, based on our genuine desire for their happiness.

“Our goal is for each person to find true happiness through practicing Nichiren Buddhism. Therefore, it goes without saying that it’s very important for you to have a strong desire that they begin practicing this faith for themselves. But even
if they don’t practice Buddhism, there’s no need to be disillusioned or disappointed.

“Try talking to one person. If it doesn’t go well, try talking to two more people. If that still doesn’t work out, try three, five, 10, and if 10 are unfruitful, then try 20. If 20 doesn’t work out, then try 30 and 40. The point is just to keep sharing Buddhism, with conviction and in high spirits. All those efforts will be transformed into benefit and good fortune, a force for transforming your karma.

“We are all ‘Bodhisattvas Never Disparaging’ of the modern day, the Bodhisattvas of the Earth. We’re following the same great path of Buddhist practice as Nichiren.”

The members who heard Shin’ichi’s guidance felt courage welling up within them. Their spirits were revived, and they set out again with a fresh determination to share Buddhism with others. (NHR-25, pp. 112–13)

Turning My Weakness Into My Strength