The federal government allows agencies to create employee resource groups (ERGs) on a variety of topics. The agency I work for, the National Credit Union Administration, recently asked me to run for president of the PRIDE ERG, which is for LGBTQ+ employees and their supporters. Below is an article I wrote for the June issue of the PRIDE ERG newsletter celebrating Pride Month. I got many positive responses from employees of the agency and received a personal email from one of its board members. My statement was inspired by Ikeda Sensei’s constant encouragement to be a source of hope and humanism to those around us. 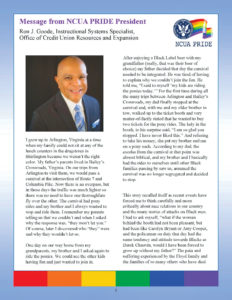 I grew up in Arlington, Virginia, at a time when my family could not sit at lunch counters because we weren’t the right color. My father’s parents lived in Bailey’s Crossroads, Virginia. On our trips there from Arlington, we would pass a carnival, which had pony rides, and my brother and I always wanted to stop and ride them. I remember my parents telling us that we couldn’t, and when I asked why, the response was, “They won’t let you.” Of course, later I discovered who “they” were and why they wouldn’t let us.

One day on our way home from my grandparents’, my brother and I asked again to ride the ponies. We could see the other kids having fun and just wanted to join in.

That day, my father decided that the carnival needed to be integrated. He was tired of having to explain why we couldn’t join the fun. For the first time during all the many trips between Arlington and Bailey’s Crossroads, my dad finally stopped at the carnival and, with me and my older brother in tow, walked up to the ticket booth and very matter-of-factly stated that he wanted to buy two tickets for the pony rides. The lady in the booth, to his surprise, said: “I am so glad that you stopped by. I have never liked this.” And refusing to take his money, she put my brother and me each on a pony. According to my dad, the exodus from the carnival at that point was almost biblical, and my brother and I basically had the rides to ourselves until other Black families passing by saw us, assumed the carnival was no longer segregated and decided to join in.

This story recalled itself as recent events have forced me to think more critically about race relations in our country and the many stories of attacks on Black men. I had to ask myself: What if the woman behind the booth had not been pleasant, but had been like Carolyn Bryant, or if the policeman on duty that day had the same attitude toward Blacks as Derek Chauvin? Would I have been forced to grow up without my father?

The pain and suffering experienced by the Floyd family and the families of so many others who have died so unjustly and tragically is, I’m sure, extreme and almost unbearable. I realized that I could have experienced the same pain.

I first realized and accepted the fact that I was gay while I was in college. There were people who knew I was gay before I did; however, I did not suffer any attacks. The worst thing that I can remember happening to me was encountering a student in my second year of college who decided that he didn’t like gays and me in particular. He did whatever he could to humiliate me by being disrespectful, mocking the way I talked or just being rude. However, that all changed when I decided to take swimming and ended up in the same advanced swimming class as he. It turned out that I was the most skillful and fastest swimmer in the class, and he was one of the slowest. I caused him to get failing grades many times because I would finish my second lap before he could finish his first one. When all the other students, male and female, including the dethroned former “best swimmer,” were praising my skillfulness and asking for my help, which I was happy to do, he could only lower his head and walk away, but the harassment stopped. That was the first time in my life I looked forward to gym class!

When I reflect on my life growing up in the 1960s and ’70s as a gay African American male, I sometimes marvel at how protected my life has been, as I didn’t experience any of the atrocities that have been suffered by many minorities. The fact that I have, for some reason, been spared some of the suffering others have had to endure, does not mean I should be unempathetic or apathetic. It doesn’t mean I should discount their suffering just because I have not experienced it. In fact, I think it means I have a responsibility as a human being to do the complete opposite, and as completely opposite as possible.

I believe our humanity is revealed in our ability to feel empathy. It’s one of the qualities that gives us the right to say we are human—in my opinion, our respect for the dignity of life makes us worthy of the gift of life. Because of this, I feel I have a responsibility to support those who suffer the most, to understand, as best I can, their pain, to stand up for them and challenge injustice when I see it, and inspire others to do the same.

Turning My Weakness Into My Strength

Nothing Will Stand Between Me and My Dreams!