On October 4, the SGI-USA held virtual general meetings across the country to commemorate 60 years since Ikeda Sensei’s first visit to the United States, which marked his maiden voyage to spread Nichiren Buddhism throughout the world. Living Buddhism met with Reiko Aragon, of Denver, who shared her experience at one of the October 4 general meetings, to learn about her experiences of helping to build the foundation of global kosen-rufu in America alongside Sensei.

Living Buddhism: Thank you very much for sharing your personal drama of helping build the foundation of worldwide kosen-rufu in the U.S.

Reiko Aragon: I don’t know how much I have contributed. I have always wanted to support the members behind the scenes, out of the limelight.

Can you share with us how you joined the Soka Gakkai?

Reiko: I joined the Soka Gakkai on June 21, 1961. I had moved to Guam in 1960 with my husband and two children after my husband was stationed there by the U.S. Navy. Due to Guam’s close distance to Japan, I visited home often. My son suffered from extreme stomach pain for many years. During a trip to Japan in 1961, my mother, who had joined the Soka Gakkai years earlier, encouraged me to start practicing and brought me to a meeting. Desperate to cure my son’s illness, I immediately received the Gohonzon. Several days later, my son felt much better and completely overcame his illness, convincing me that this practice had great power.

During my trip, I attended a meeting where Ikeda Sensei was present. At the time, I didn’t know who he was, but I was inspired by his compassion. I believe he heard from a leader that a member was visiting from Guam who had recently received the Gohonzon.

Sensei invited me to have tea with him. I remember that he, like everyone else, was dressed in casual summer clothes. He put me at ease by genuinely trying to learn about my life and circumstances. He also praised me for courageously taking on faith in Nichiren Buddhism even though I lived in a country without a Soka Gakkai organization. Then, he told me with full conviction, “No matter what, never let go of the Gohonzon.” I said, “Yes,” but I didn’t really understand what he meant, as it didn’t seem like such a difficult thing to do at the time.

What a golden memory! How were things after you returned to Guam?

Reiko: When my children and I returned to Guam, I enshrined the Gohonzon and started doing gongyo. When my husband heard me chanting, he exploded with anger, kicking in the door. I tried to explain what I experienced in Japan, but he told me to go back to Japan and take the children, too. I’m usually soft spoken, but his opposition inspired courage in me, and I challenged him. He reluctantly allowed me to keep the Gohonzon enshrined, as long as I didn’t chant Nam-myoho-renge-kyo or do gongyo while he was home. I never knew I had that courage within me! I felt indescribable joy at how I was transforming my life. I wanted to tell everyone about the practice.

What was it like practicing Buddhism in Guam during the early 1960s?

Reiko: When my husband was home, I would lock myself in the bathroom and face the general direction of the Gohonzon to chant. By then, I had gained conviction in my practice, and was determined to persevere. I also prayed to advance kosen-rufu in Guam and finally learned about one other member, another Japanese woman married to an American serviceman. I had a car, so I would pick her up, and we would make friends with people and introduce them to Buddhism. We initially focused on sharing Buddhism with other military wives and then naturally began introducing others as well. I didn’t fully understand it then, but doing kosen-rufu activities enabled me to forge my inner core. These are now my treasured memories. 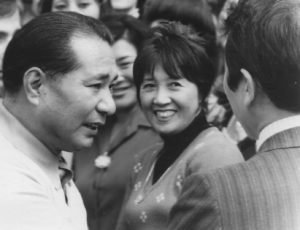 It must have taken such great courage to blaze a trail of kosen-rufu in Guam. We hear you lived in several other countries as well.

Reiko: Yes, my husband’s job took us to Europe, where we moved several times. The country where we spent the most time was Belgium. We lived in a city with only four or five other Soka Gakkai members. Almost every day, we all packed into one car, drove to activities and introduced many people to Buddhism. During this time, I made wonderful friends in the organization, our membership grew, and my children began to stand up in their own practice. On one of Sensei’s visits to Paris, I was able to have breakfast with him. He thanked me deeply for all of my efforts for worldwide kosen-rufu. I was so moved!

Meanwhile, my husband grew more opposed to our Buddhist practice. In 1976, he was stationed in Norfolk, Virginia. Soon after, he sent me a letter saying I would have to choose between him and my Buddhist practice. At that moment, Sensei’s encouragement rang in my heart: “Never let go of the Gohonzon!” I told him that I couldn’t quit my faith. As a result, he cut us off financially, leaving us stranded in Europe, not knowing where to go.

What did you do next?

Reiko: We survived a little longer in Belgium. Fortunately, I had a good relationship with my mother-in-law. She invited us to live with her in Denver in 1978, until we could get back on our feet. My son and I found work right away, and when my daughter and baby grandson moved from Spain to Colorado in 1980, we qualified for a low-income apartment.

Even though we all lived in a cheap, cramped apartment, sometimes unable to buy food, I was determined to show actual proof and transform my family karma. I wrote to Sensei and made the determination that, no matter what, I would win and prove the power of the Gohonzon to everyone.

We decided to use our apartment as a base for kosen-rufu activities in Denver. Our home was open for SGI activities 24/7, and I did lots of shakubuku in the neighborhood. Within a few years, a new company bought our apartment complex to gentrify the entire property, but barely increased our rent. We were so protected. My daughter also found steady work, and our finances and quality of life improved dramatically.

What a great example of not being defeated! Do you feel that you were able to transform your family karma?

Reiko: I do, but the biggest struggle of my life was to come. On May 18, 1987, my ex-husband called me to inform me that our son, Art, who had been battling depression for a while, took his own life. This shook me to the core. I chanted Nam-myoho-renge-kyo to the Gohonzon through tears. I wrote a letter to Sensei explaining what happened, and he responded with a letter of encouragement.

In his letter, he cited this passage from Nichiren Daishonin: “Those who believe in the Lotus Sutra are as if in winter, but winter always turns to spring” (“Winter Always Turns to Spring,” The Writings of Nichiren Daishonin, vol. 1, p. 536). Sensei’s compassion touched my heart. I knew deep down that as long as I never gave up, I would ensure Art’s enlightenment.

My daughter, Ruth, landed her dream career, and our finances improved so dramatically that we were able to realize our dream of buying a home. Today, I have two grandchildren who are fighting on the front lines of kosen-rufu and a beautiful great-grandchild.

How did your relationship evolve with your ex-husband?

Reiko: Over the years, my children and I stayed in touch with their father. On one occasion when he visited us, he told us that he knew this Buddhism worked, because he saw how it had changed our lives. We were stunned. He even attended an SGI meeting with us and thoroughly enjoyed it! My ex-husband and his wife fully support our Buddhist practice. We have all become good friends, a situation I never could have imagined. I’m 92 years old, and have never been so happy. 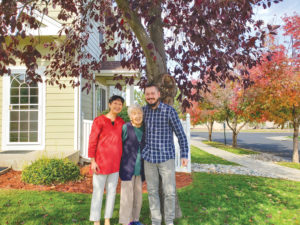 What a profound experience! Sensei visited Denver in June 1996 to receive an honorary doctorate from the University of Denver. What do you recall about his visit?

Reiko: I was able to support Sensei’s visit behind the scenes by helping clean the Denver Culture Center. Although I didn’t physically meet with him during this visit, he often expressed his appreciation to all the members working behind the scenes, so I know he was completely aware of everyone’s efforts. Also, after his visit, there was a fresh energy in the Denver organization. Most of the members met Sensei for the first time because it was his first trip to Denver. I could tell that Sensei developed a strong bond with the Denver members, and the members’ seeking spirit toward Sensei grew much stronger. This visit was a turning point for kosen-rufu in our city.

Looking back, what do you treasure most about your journey?

Reiko: I feel like Sensei has been by my side throughout my life journey, through all my ups and downs. With every setback, his words to me at the beginning of my practice to “never let go of the Gohonzon” became deeply rooted in my life.

I have been so happy to see the growth of the youth division in Denver over the years. I’m determined to continue introducing many people, especially young people, to our life-transforming practice so that they can inherit the future.

There Is Always Something I Can Do

Fighting for the Happiness of the Caribbean People