Editors’ Note: From 2012, the Soka Gakkai–affiliated monthly magazine Pumpkin began a serialization of essays by Ikeda Sensei under the title “Unforgettable Journeys,” later compiled in book form in Japanese.

In these essays, excerpted for the present series by the Seikyo Shimbun, Sensei recounts memories of places he has visited and the friends he has made along the way. This installment features London.

Including the visits for his dialogue sessions with the eminent historian Arnold J. Toynbee (1889–1975), Sensei has visited the United Kingdom seven times and has fostered wonderful friendships with many British people.

As the world battles the coronavirus (COVID-19) pandemic, the number of confirmed cases in the U.K. is still on the rise. Sensei continues to send messages and encouragement to SGI members across the globe as they grapple with this unprecedented crisis.

This essay highlights the invincible spirit of the British people, who have overcome countless challenges throughout their long history. The text was published in the April 27 issue of the Seikyo Shimbun, the Soka Gakkai’s daily newspaper, as a means to share it with all those around the world who are doing their utmost to protect their families, encourage their friends and support their communities during this difficult time.

I wait expectantly to see
the green trees
unbeaten by the storms
reaching high
into the sky.

London sits at a latitude of 51 degrees north. The sun sets early in the winter there—at about 4 p.m. on the shortest days of the season. Spring doesn’t arrive in its full glory until May.

After the harsh and dreary winter, the spring sunlight is almost blinding. The fresh greenery shimmers, and all of nature comes alive. Spring in London is surely one of the loveliest seasons in the world.

“March winds and April showers / Bring forth May flowers,”[1] as a nursery rhyme from Mother Goose goes.

One of the best-loved “May flowers” in the U.K. is the hawthorn, which is said to symbolize hope. Like this flower, many of my friends in the U.K. embody an invincible and optimistic spirit. Facing adversity with a positive outlook, they dynamically transform even storms of hardship into a source of spiritual nourishment; they wait for and create the time, and cause fragrant flowers of hope to bloom.

[It was at Toynbee’s invitation that Sensei visited the U.K. in May 1972, and again in 1973, to engage in a dialogue at his home in London. Sensei recalls memories of Toynbee and his wife, Veronica, as well as members’ dedicated behind-the-scenes support.]

Together
let us set forth
on a glorious journey in this world.

In his many writings, including his magnum opus, A Study of History, Toynbee developed a unique view of the history of civilizations. He was an outspoken advocate for peace and humanism, which led him to be subjected to various forms of pressure. He also experienced the tragic loss of a beloved son.

But Toynbee, whose historical perspective was that humanity advances by responding to the challenges that it confronts, lived his life with the resolve to always learn something from hardship and suffering. 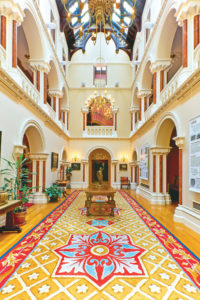 Veronica Toynbee solidly supported her husband in that same spirit. Expressing his gratitude for his wife, Toynbee wrote, in a dedicatory poem: “To one with such a dear companion, exile is not exile: Wherever her love abides is my homeland.”[2]

Great hardships always lie in wait for those who blaze new trails. The love and trust among family members becomes deeper, stronger and nobler through encouraging one another and overcoming life’s challenges together. In this way, they can bring the joy of living into glorious bloom.

Several individuals in particular played a key role in ensuring the success of my dialogue with Toynbee. At the end of each day, they listened to the recorded tapes of our conversation, transcribed them, and prepared them for our review.

Without their strenuous behind-the-scenes efforts, it would not have been possible to compile our discussions into book form.

A number of young women would type up our transcripts on a typewriter, one of whom would then rush off to her job as the stage manager at a well-known theater. She happily expended all her youthful energy to support our dialogue, regarding those days as a treasured experience of her youth. Later, she became one of the first female company managers, at a time when the theater industry was still largely male dominated.

There is a famous passage from Shakespeare’s “King Lear:” “Henceforth I’ll bear / Affliction till it do cry out itself, / Enough, enough, and die.”[3]

As a single parent, this young woman gave her all to raising her son while working and contributing to her community. Each day was a tremendous struggle as she faced financial hardships and numerous other challenges.

However, with her mottoes of “Never blame others for your difficulties,” “Try not to complain” and “Have confidence in yourself,” she turned everything into part of her personal drama of human revolution. She went on to become a faculty director at a prestigious school of music and drama, fostering countless young people over the years.

My wife, Kaneko, and I were overjoyed to learn of the great victory of this wonderful woman who worked so hard behind the scenes. Our gratitude and admiration for her knows no bounds.

The English writer and pioneer of women’s rights Mary Wollstonecraft (1759–97) declared that women “must be permitted to turn to the fountain of light.”[4]

In the dramas of both life and contemporary society, the sunny spirit of women can change darkness into light, suffering into joy, sorrow into hope and division into harmony.

Over the course of history, the people of London have surmounted numerous challenges, including the threat of foreign invasion and the Great Fire of London, always keeping the spirit of independence alive and steadfastly upholding the principles of human rights and respect for human dignity.

They refused to be defeated by the intense aerial bombings by Nazi German forces during World War II. They have remained invincible in the face of every form of adversity, always pressing forward, just as the bounteous, calm waters of the Thames flow serenely on.

The SGI-UK Taplow Court Grand Culture Centre, where I have met many wonderful people, was once the residence of William Henry Grenfell, Lord Desborough (1855–1945), a great athlete who worked hard to ensure the success of the first London Olympics in 1908.

When we strive each day for the sake of others and the next generation, making earnest efforts step by step in our own unique way, we can lead shining lives free of regret. That is why it’s so important to give our all right now, to live today to the fullest, brimming with compassion and courage!

“Do not be defeated!”
the voice of the heavens
calls to you on your journey.

“Protectors of Life— The Lofty Spirit of Hope!”

Powerfully Ring in a New Renaissance!