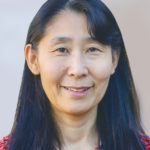 As we continue to witness the horrendous news of racial discrimination, such as the brutal killing of George Floyd, it is clear that we must strengthen the forces of good and expand the ranks of capable people leading our kosen-rufu movement.

On Feb. 11, 1990, Nelson Mandela, a champion of human rights, who brought an end to the inhumane policy of apartheid in South Africa, was released after 27 years (about 10,000 days) in prison. I recall hearing this news as a young woman with much excitement, feeling that a new era had dawned. We witnessed firsthand that justice prevails.

During his imprisonment, Mr. Mandela read Ikeda Sensei’s writings and was inspired to meet him. Just eight months after his release, he visited Tokyo and had his first encounter with Sensei on Oct. 31, 1990.

On that day, Sensei welcomed this indomitable lion with utmost warmth and respect, together with vibrant SGI youth, who cheered: “Viva! Mandela!” and then sang the beloved song of the South African people “Rolihlahla Mandela.”

In this historic meeting, Sensei and Mr. Mandela discussed the importance of promoting education and raising successors. Sensei later recalled a memorable moment from their talk:

Mr. Mandela and I discussed the need for raising successors. Dispensing with formalities, I [told] him candidly: “Even though your country has in you an unprecedented and great leader, unless there are many excellent people behind you, your job will never be accomplished.” He sat on the sofa listening intently. I continued: “One tall tree does not make a forest. Unless other trees grow to the same height, you cannot have a large grove.” … As I spoke, Mr. Mandela nodded deeply, showing complete understanding. (October 2001 Living Buddhism, pp. 41–42)

When I heard about this, I remember thinking: Wow, that’s right! Without raising many capable successors, no movement can endure.

During this dialogue, Sensei also said he wanted to invite South African students to study at Soka University in Japan, with recommendations from Mr. Mandela. Around the year 2000, Soka University began welcoming these exchange students, and today, youth from other countries in Africa are studying there as well.

Now, midway through 2020, the Year of Advancement and Capable People, let’s refresh our resolve to raise successors for kosen-rufu—a movement that will transform the hearts and minds of the people, and elevate the life condition of our society.

I have been receiving questions, such as, “How can we raise capable people during this pandemic, when we cannot even engage in home visits?”

Sensei teaches us that the key to raising successors lies in “setting an example and taking action together” (October 2014 Living Buddhism, p. 28).

Although the current pandemic is restricting our physical activities, there is absolutely no restriction in using our voices to “carry out the work of the Buddha” (see The Record of the Orally Transmitted Teachings, p. 4).

Offering encouragement to members together with our wonderful successors—using Facetime and Zoom, or making phone calls—is giving me the greatest hope and happiness. It is just as Nichiren Daishonin states, “ ‘Joy’ means that oneself and others together experience joy” (OTT, 146).

When we unite together, our joy and momentum are multiplied. We can learn from one another and grow together!

Each time we engage with a fellow bodhisattva one-to-one, it becomes a process of making a powerful vow together to triumph over all hardships, illuminating any darkness within. Each dialogue helps us reveal the treasure tower within, the dignity of our lives.

Let’s also cherish and raise our wonderful new members! I am engaged in weekly calls with those who’ve recently joined the SGI-USA, including Nicole Savoy, who joined in early March. With support from her local women’s leader Afreeka Phillips and me, the three of us completed studying the booklet An Introduction to Buddhism together!

Nicole is enjoying tremendous benefits and breakthroughs, backed up by study, reminding us how empowering Nam-myoho-renge-kyo is.

Recently, her grandmother told her that her Baptist preacher shared that another Baptist preacher was influenced by a Buddhist. Sounds familiar? Yes, he was referring to Lawrence E. Carter Sr., dean of the Martin Luther King Jr. International Chapel at Morehouse College, and Sensei! I am delighted that Nicole’s grandmother wants to know more about our mentor.

Sensei writes, “My prayer is that you will foster your juniors to become even more capable than yourselves” (My Dear Friends in America, third edition, p. 472).

Let’s create a large grove of capable people with this type of prayer by “taking action together”!

Toward a Century of Health: The Wisdom for Leading a Long Life of Good Fortune and Benefit Part 2