The Ikeda Wisdom Academy is an SGI-USA youth division movement to engage youth leaders in advanced study. This month, academy members will study chapter 10 of The Heritage of the Ultimate Law of Life: SGI President Ikeda’s Lecture Series.

While the Ikeda Wisdom Academy is a youth leaders study program, all SGI-USA members are invited to utilize this section of Living Buddhism as a guide for their personal study of “The Heritage of the Ultimate Law of Life.”

Nichiren Daishonin discusses the profound meaning behind the relationship between mentor and disciple demonstrated by the Bodhisattvas of the Earth, who are led by Bodhisattva Superior Practices. Nichiren stresses that the heritage of the ultimate Law of life and death flows through such practice.

The Bodhisattvas of the Earth are experts in the art of life who help people transform themselves on the most fundamental level and gain true inner happiness. Their wisdom and actions are based on the profound philosophy that both they and others possess the Buddha nature. This belief enables them to overcome self-centeredness and negative karma, and bring the power of compassion inherent in the universe to flow forth abundantly. This is the source of their shining and infinitely inspiring character as well as their unceasing efforts to lead others to enlightenment.

This is the true reason for the transmission of the heritage of the ultimate Law of life and death—to enable all people to attain Buddhahood. If someone misses this key point, then however much they might read the Lotus Sutra, they effectively shut themselves off from the heritage of attaining Buddhahood. Therefore, only when one has a deep inner aware-ness that one is a Bodhisattva of the Earth—a protagonist in the effort to enable all people to attain enlightenment and stands up with the mentor in faith to carry out this mission—can one be said to have truly internalized the teachings of the Lotus Sutra. (The Heritage of the Ultimate Law of Life: SGI President Ikeda’s Lecture Series, p. 98)

Practice Is the Lifeline of Buddhism

How admirable that you have asked about the transmission of the ultimate Law of life and death! I have never heard of anyone who has asked such a question. I have answered in complete detail in this letter, so please take it deeply to heart. The important point is to carry out your practice confident that Nam-myoho-renge-kyo alone is the heritage that was transferred from Shakyamuni and Many Treasures to Bodhisattva Superior Practices.

The function of fire is to burn and give light. The function of water is to wash away filth. The winds blow away dust and breathe life into plants, animals, and human beings. The earth produces the grasses and trees, and heaven provides nourishing moisture. The five characters of Myoho-renge-kyo are also like that. They are the cluster of blessings brought by the Bodhisattvas of the Earth, disciples of the Buddha in his true identity. The Lotus Sutra says that Bodhisattva Superior Practices will appear now, in the Latter Day of the Law, to propagate this teaching, but has this happened? Whether or not Bodhisattva Superior Practices has appeared in this world, Nichiren has already made a start in propagating this teaching. (The Writings of Nichiren Daishonin, vol. 1, pp. 217–18)

In this passage, Nichiren specifically addresses Sairen-bo’s question from the standpoint of practice. He clarifies that the key to inheriting the ultimate Law of life and death lies in spreading Nam-myoho-renge-kyo following the example of Bodhisattva Superior Practices. Nichiren underlines the necessity for disciples to practice in the same spirit as Bodhisattva Superior Practices.

Next, by drawing parallels with the functions of the five elements of earth, water, fire, wind and space, Nichiren outlines the power of Nam-myoho-renge-kyo. Disciples manifest this power when they practice with the same dedicated spirit as Bodhisattva Superior Practices. These functions represent the power of compassion inherent in the universe, which was believed to be composed of the five elements. (Lecture Series, 98–100)

After indicating the innate value-creative func-tions of the five elements, Nichiren says: “The five characters of Myoho-renge-kyo are also like that. They are the cluster of blessings brought by the Bodhisattvas of the Earth, disciples of the Buddha in his true identity” (WND-1, 218). He is declaring that the functions of the five elements are themselves the functions of the five characters of Myoho-renge-kyo and that they constitute the blessings, or the beneficial workings, of the Bodhisattvas of the Earth.

In other words, the compassionate workings inherent in the universe itself are the essence of the functions of Myoho-renge-kyo, and the Bodhisattvas of the Earth benefit others by means of these inherent functions of the Mystic Law.

From Nichiren’s words, we can conclude that the true nature of the benefit of the Bodhisattvas of the Earth is to enable people to substantively express, in their own character and behavior, the compassionate functions that are innate in life. 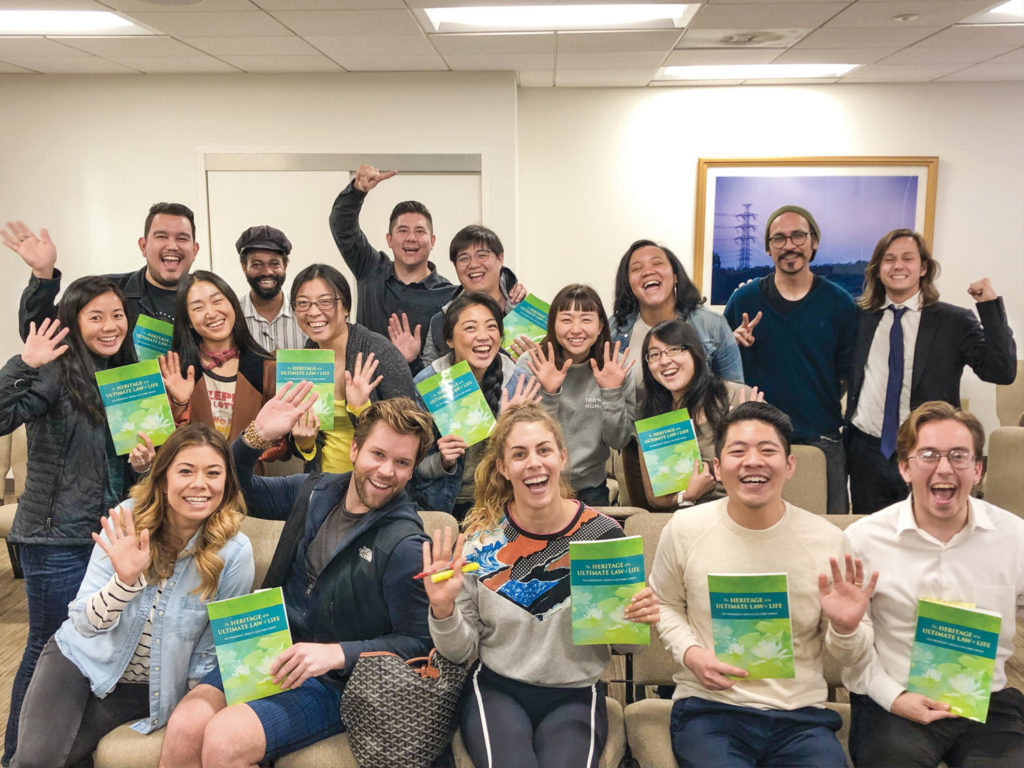 In short, these characteristics express the transformative functions within people’s own lives, which underlie the principles of “earthly desires are enlightenment” and “the sufferings of birth and death are nirvana.” Indeed, the word practices in the names of the four bodhisattvas alludes to efforts that are directed toward inner transformation. (Lecture Series, 101–04)

The Life State of “Bodhisattva-Buddhas”

In “The Heritage of the Ultimate Law of Life,” Nichiren refers to “the cluster of blessings brought by the Bodhisattvas of the Earth, disciples of the Buddha in his true identity” (WND-1, 218).

“Disciples of the Buddha in his true identity” means disciples instructed by Shakyamuni as the Buddha enlightened since the remote past described in the “Life Span of the Thus Come One” chapter of the Lotus Sutra. Because the Bodhisattvas of the Earth possess as their inner enlightenment the eternal Mystic Law that is one with that Buddha, they can stand up alone and propagate that Law even in the evil age after Shakyamuni’s passing.

The Lotus Sutra explains that the Bodhisattvas of the Earth are bodhisattvas who have emerged from the world of truth that lies in the lower region beneath the earth. The Great Teacher T’ien-t’ai says this world of truth means “the depths of the Dharma nature, the ultimate region of the profound source” (The Record of the Orally Transmitted Teachings, p. 119), indicating that the Bodhisattvas of the Earth are enlightened to the ultimate truth. Nevertheless, these bodhisattvas persist in carrying out bodhisattva practice—that is, they continually strive in an evil age to transform their own lives and the lives of others with the goal of achieving kosen-rufu. But in terms of their inner enlightenment, they already possess the life state of Buddhahood that is awakened to the Mystic Law. As such, they could be called “bodhisattva-Buddhas.” Nichiren revealed and spread Nam-myoho-renge-kyo in order to make it possible for all people to achieve this state of life. By deeply believing in Nam-myoho-renge-kyo and practicing exactly as Nichiren teaches, any person can attain the life state of a “bodhisattva-Buddha.”

The Bodhisattvas of the Earth who practice Nam-myoho-renge-kyo already possess the Mystic Law. Since that is the case, they can propagate the Mystic Law through one-on-one, life-to-life interaction—reaching out to the Buddha nature of others with their own Buddhahood.

No matter what karma others may be strug-gling with, one can only really lead them to enlightenment by awakening them to the fact that the power to break through that karma already exists within their lives. Only Bodhisattvas of the Earth possessing the essential or original Law are able to bring about this awakening.

In the Latter Day of the Law, there is utterly no possibility that salvation will come “from above,” that is to say, by the grace of a transcendent Buddha who descends from the heavens. People can only become aware of the infinite power existing within their own lives by encountering Bodhisattvas of the Earth who have emerged from the lower region that is the world of truth, in other words, “from below.” (Lecture Series, 104–06)

A Global Gathering of Bodhisattvas of the Earth

The Soka Gakkai has revived this bodhisattva practice in the modern age through its practice of Nichiren Buddhism.

Soka Gakkai founding president, Tsunesaburo Makiguchi, once remarked: “We must clearly distinguish between believers and practitioners. While there is no dispute about the fact that someone who believes [in the Mystic Law] will have their prayers answered and realize benefit, this alone does not constitute bodhisattva practice. There is no such thing as a self-centered Buddha who simply accumulates personal benefit and does not work for the well-being of others. Unless we carry out bodhisattva practice, we cannot attain Buddhahood.”

Mr. Makiguchi understood that bodhisattva practice is the heart of Nichiren Buddhism, and he embodied it in his own actions. This practice was missing from the Nichiren Shoshu priesthood of the day. Mr. Makiguchi recognized that the power of Buddhism can only be demonstrated through the actual proof of faith shown by practitioners in their daily lives. He also keenly perceived that Buddhist salvation was not about the Buddha saving people by means of his resplendent appearance, but rather about people bringing forth their own inner potential through personally challenging themselves in bodhisattva practice and inspiring others to do the same.

When we awaken to the incredible power that lies within us, we can change our world.

Mr. Makiguchi’s staunch disciple, second Soka Gakkai President Josei Toda, who accompanied him to prison, had a spiritual awakening in his prison cell to his original identity as a Bodhisattva of the Earth. After his release from prison, he went on to call forth 750,000 courageous Bodhisattvas of the Earth; and it is they who built the foundations of the Soka Gakkai.

Indeed, the members of the Soka Gakkai alone have persevered in the practice of chanting and spreading Nam-myoho-renge-kyo with a profound awareness of their mission as Bodhisattvas of the Earth. As Nichiren Daishonin writes, “Were they not Bodhisattvas of the Earth, they could not chant the daimoku” (“The True Aspect of All Phenomena,” WND-1, 385).

Today, countless intrepid bodhisattvas have emerged from “the great earth of the Dharma nature” in [over] 190 countries and territories around the world in order to realize kosen-rufu. The emergence of the Bodhisattvas of the Earth as expounded in the Lotus Sutra is being reenacted in the present age by none other than the SGI.

Bodhisattvas of the Earth are unhindered by such distinctions as nationality, culture or race. In fact, our global network of Bodhisattvas of the Earth is today forging deep mutual understanding and sympathy transcending differences of ideology, creed and religion. All people are equal, and everyone is worthy of respect. When we awaken to the incredible power that lies within us, we can change our world.

The solidarity of awakened people can help others realize their highest potential and thus make the world a better place. We have now entered an age when our gathering of Bodhisattvas of the Earth is attracting praise far and wide. The time has come when people everywhere are earnestly seeking the egalitarian and humanistic “Buddhism of the people” of Nichiren Daishonin.

Based on the mentor-disciple spirit of Soka, let us now show the world the real “power of the people” that is the hallmark of the Bodhisattvas of the Earth. (Lecture Series, 107–08)

The Beginning of All Things

Expressing Our Appreciation on This Significant May 3