“Even if you think you’re hopeless and incapable, I know you’re not. I have not the slightest doubt that each of you has a mission. No matter what others may say, I will always respect you and believe in you. No matter what your present situation is, I am absolutely certain that a wonderful future awaits you.” (Ikeda Sensei, You Were Born to Win, p. 20)

When I confided in a friend that I planned on taking my own life on my 25th birthday, she introduced me to Buddhism. I was so moved by her compassion and the faith she had in me, especially because I valued my existence so little, that I began to chant Nam-myoho-renge-kyo, study Buddhism and attend SGI meetings. Three months after turning 25, I received the Gohonzon on Jan. 1, 2006.

In the beginning, I chanted mainly in times of emergency. Looking back, I see that I was inconsistent because I had so much fear in my life, and I didn’t feel worthy of becoming happy. When challenges arose, I strategized about how to escape them and repeatedly spiraled into depression.

Escaping and being alone had been my refuge since I was young. My parents separated when I was 8, and I struggled to process their split. I was often bullied for being slow, being Black or too quiet. As I got older, I was violated by others and also realized I was labeled a gender that I didn’t identify with. Fundamentally, I felt my true self was confined, and I often pondered the questions: Why me? Why was I born this way?

I started to become more consistent in my practice in 2012 after I introduced a woman named Faith to this philosophy. We had started dating, but more than anything, I wanted her to be happy. She commented on how happy and different I was when I chanted consistently, and she decided to give the practice a try. 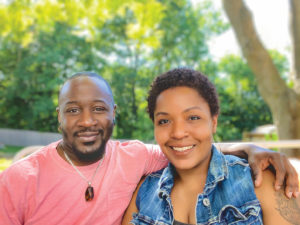 Because of my gender dysphoria[1] and my assumptions that I would be misunderstood, I had stopped associating with the SGI-USA years earlier. Due to my anxiety, I struggled to engage with people in my environment. Yet, as Faith actively attended SGI-USA activities, I witnessed her change, and I decided to join her. I was finally ready to face my life.

That year, I started chanting sincerely morning and evening and deeply studying Sensei’s guidance as if he was speaking directly to me. When I was honest in front of the Gohonzon about whatever I was feeling, things began to change for the better. I was learning how to “transform [my] problems into prayers” and, over time, I developed conviction that I could triumph over everything that was troubling me (see July 2019 Living Buddhism, pp. 57–58).

I pulled forth the confidence to create concrete determinations to address my past trauma and move forward toward my dreams. I found the best doctors and therapists who guided me through my gender dysphoria and supported my physical transition. My life was opening up, and when I faced obstacles, I actively sought guidance from my seniors in faith and introduced others to the practice, including my mother who received the Gohonzon, too.

In 2015, I proudly transitioned from the young women’s division to the young men’s division, and soon after took on leadership to support other young men. When I shared my decision with fellow SGI members, they embraced me with open arms.

That’s when it began to click—in the Soka Gakkai, I was able to discover my voice and my true identity as a Bodhisattva of the Earth. Being a Bodhisattva of the Earth means that because I am Black, because I am transgender, because I have experienced abuse, trauma and other struggles, I can use my life to help others become happy. In living for the sake of others, I found the fulfillment I had long been searching for.

From that point, I haven’t looked back. I now use my struggles as the fuel I need to be the alchemist of my own life. In line with my cherished dream of working in the coffee industry, I am now a master coffee roaster at an independent coffee shop. I strive to have Sensei’s spirit in every interaction there, creating a space for people to engage and be themselves. Faith is now my fiancee, and after more than 20 years of separation, my parents are back together.

Most profoundly, I love who I am. I used to feel worthless when I thought about myself and where I came from. The radical change I have undergone through developing a consistent Buddhist practice alongside Sensei and the SGI-USA speaks to me at the core. I am determined to help many young people begin their Buddhist practice this year, so they, too, can discover that with Sensei as their mentor, there is no way they can fail.

Changing Poison Into Medicine for All Humanity

Becoming Pioneers of a Better Age