Living Buddhism: Thank you, Sharen, for sharing your experience with us. To start, can you relay your journey of encountering Buddhism?

Sharen Davis: I’m so grateful to be a part of the SGI-USA and for this opportunity to share my experience with you. I have been chanting Nam-myoho-renge-kyo recently with the determination to have a voice, to not shy away from speaking about my life. It’s interesting how this opportunity came at this time.

In 1976, I found myself in San Francisco, totally heartbroken. I realized that I had been sad most of my life. I was an overachiever, I struggled to speak up, and I felt like I was missing something. That’s when a friend told me, “You know you’re the only person who can make you happy,” and encouraged me to try practicing Buddhism.

Deep down, I knew she was right. Since the philosophy already resonated with the views I grew up with, I figured I’d try chanting. And when I did, it was like I found the courage and hope I had been looking for all along. Shortly after, I received the Gohonzon.

What changed from there?

Sharen: I felt that I could achieve anything with the practice and that I didn’t need anyone’s help. I fought through my sadness and learned to transform my negative tendencies into something value-creative. And these changes within me opened a new path in my career.

For years, I had worked as an administrative assistant for a costume designer in film, and while I had always brought a good attitude to work, I wanted to transition into something more creative. I started chanting to bring my Buddha nature to work, and instead of putting others down, I chose to support others, even sharing Buddhism openly with my co-workers.

Then, one day, I got called in by my director. Although I had no direct experience, he asked me to become the costume designer for an upcoming project, all because of the good things he had heard about me from others. It was what I had been chanting for!

From there, over the course of a decade, I worked hard and made my way into bigger films. And in 2005, I was nominated for an Academy Award for Best Costume Design for the film Ray. 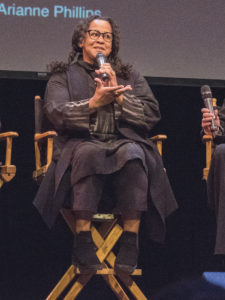 Congratulations! It sounds like this was a major turning point for you.

Sharen: Actually, I felt undeserving of my achievements, and I wanted to lose the nomination.

Also, amid my busy work schedule and the SGI-USA organization undergoing a great change in the ’90s, I got disconnected. We didn’t have cell phones back then, so I wasn’t sure even how to go about reconnecting. Then, two years later, I was nominated for the same award for the film Dreamgirls. This time, I thought I was ready, but I caved into all the pressure and found myself desperately chanting not to win. A depression set in, and I began isolating myself from friends and family, and escaped into work.

These were bleak times for me. I felt I had one foot on the gas pedal and the other on the brakes. Although I was getting nominated for various awards, I didn’t enjoy any of it. And I still tried helping others, too, and would often share Buddhism with them. But at the end of the day, I didn’t make any efforts to reach out proactively, and since I didn’t know about the SGI, I didn’t know to whom to direct them. Even at the height of my career, I didn’t know how to help others, and I only felt selfish and unfulfilled.

How did you reconnect with the SGI?

Sharen: In 2013, I headed to Vancouver, Canada, for a six-month project. I was provided with my own place, so it inspired me to set up a space to chant. I pulled out my gongyo book, my beads and a bell, and as I started doing gongyo, it dawned on me that I had been chanting to blank walls for 10 years, with the Gohonzon safely stored away.

I asked myself, How did I get so lost? I chanted to somehow seek guidance from a member.

The following day at work, one of my co-workers started sharing about her new Buddhist practice with the SGI and asked if anyone would be interested in coming to a meeting that night. This was it. I immediately said yes!

That night was my first time entering an SGI center. When I started chanting to the Gohonzon together with everyone, tears of joy ran down my face. I felt the universe was asking me, Where have you been? The years of desperation and loneliness I had been carrying was replaced with hope and courage.

What changed this time around?

Sharen: This experience showed me the importance of chanting to the Gohonzon and being connected to the community of good friends in faith. So, when I returned to Los Angeles, I immediately went to an SGI center and got connected to a district. Now that I was connected to other members again, I felt so alive.

To ensure that I didn’t drift off, I chanted to get a job in L.A. And after several interviews, I landed a job for the TV show Westworld, which was being filmed in L.A.! I knew the job was going to be extremely difficult, but as Ikeda Sensei writes:

One thing is certain: The power of belief, the power of thought, will move reality in the direction of what we believe and how we conceive it. If you really believe you can do something, you can. That is a fact. (My Dear Friends in America, third edition, p. 258)

The show was indeed overwhelming, working seven days a week. But, this time, I had a consistent practice with the Gohonzon, Sensei’s encouragement and the members’ support to fight through any challenge.

In 2018, I was nominated for a Primetime Emmy Award for Outstanding Costumes for a Series for Westworld. I didn’t win, but I wasn’t defeated. And the following year, I was nominated for another award by my peers. This time, I immediately sought guidance from my seniors in faith and chanted abundantly to win—for my hard-working crew, for the amazing work and to show actual proof of this wonderful practice.

We won, and I was overjoyed. More than anything, I felt I had won over myself and my lifelong tendencies.

Congratulations! How else has SGI impacted your life?

Sharen: Well, taking on leadership within the SGI has changed my life. At first, I didn’t think I’d be able to fill the shoes of our previous district women’s leader, but I realized I had to create my own path.

I started by listening to each member and discussing how we could work together to create the district we wanted. I also made more efforts to study to ensure that I understood Sensei’s heart before relaying it to the members. Before, I just enjoyed reading the publications, but this sense of responsibility to support others transformed the way I took in Sensei’s guidance and Nichiren’s writings, and, in turn, it deepened my own understanding of our Buddhist philosophy.

These efforts have helped me develop the ability to listen to and understand the needs of each individual and work with them. I find myself thinking before I speak to ensure that I can make an impact. Overall, it’s made me a better communicator in difficult settings.

How do you feel your current position in the film industry connects to kosen-rufu?

Sharen: In terms of my personal goals, I’m pushing my own limitations to start producing films. I feel the world needs more films that have a human message, that let us know that there is a future of peace and a society rich in culture and art.

On a day-to-day level, I see a lot of youth who want to get into the film industry, but I see the prevalence of a culture where people put others in a bad light to get ahead.

Whenever I engage with youth at work, I look at them as if they were the youth in my SGI district. I understand how difficult it is to see things clearly when we only see our own fears and suffering, so I engage in dialogue with them. I remind them that they don’t have to bring others down to move ahead; instead, they have to find their own courage and use their own life’s potential.

It sounds like supporting the youth is an important part of your life.

Sharen: Yes. Personally, for the past seven years, I’ve been chanting for my godson. The silver lining in this coronavirus pandemic is that it gave me the opportunity to see him more consistently as he drops off my groceries. I noticed he was struggling, so I asked him to chant with me. Surprisingly, he loved it, and he even got his girlfriend to start chanting! I’ve known him all his life, so I’m so happy to see him take on chanting.

It’s also been an unbelievable joy engaging with the youth in my district and watching them grow. What blows me away most is that they love to study Nichiren’s writings, which I assumed was unappealing to the youth.

These experiences in my district and at work have shown me that youth these days are seeking a genuine philosophy of life. What’s different this time is that I have a place to guide them to—our SGI activities—and I actively utilize our social media content.

Thank you very much, Sharen, for your efforts in supporting the youth. Lastly, as an individual with many dimensions and responsibilities, what do you feel is your mission, especially in the current state of society?

Sharen: Buddhism teaches that there’s a deeper identity within me as a Bodhisattva of the Earth. So, I’m going to help anybody and everybody. I can’t pick and choose who because I’m supposed to according to the times. I’m going to help others, regardless, because it’s in my heart.

I’ve had many one-to-one calls with individuals, and I chant each time to connect with them, especially if they hold other beliefs. I believe that we can’t just limit ourselves and that we have to develop mutual understanding.

I am aware that there are few people of color who work as costume designers in the industry. When aspiring designers ask me how I did it, I chant for whomever I am interviewing with to see me—my heart—not Sharen, a Black person, or Sharen, a woman. Sensei writes:

I share with them that I have a Buddhist practice that I engage in every day, every moment, and how it offers a broader, all-encompassing perspective of life. As a Buddhist, I feel it’s my responsibility to courageously use my voice and share about the significance of the SGI, especially having once lost sight of our community.

I have confidence that people will take notice when we, ourselves, are grounded in a deeper sense of self. I no longer feel that I’m missing something. So, I chant and put myself out there so that the person just sees me.

Believing in My Mission as a Scientist