The “Moving Forward” chapter of volume 18 of The New Human Revolution describes how the 1973 oil crisis shook Japan and the world. Oil prices skyrocketed due to a war between a coalition of Arab nations and Israel in October that year, throwing Japan—and indeed the entire globe—into recession. In Japan, people resorted to panic buying, and there was a severe shortage of goods.

Referring to Nichiren Daishonin’s writing “On Reprimanding Hachiman,” Shin’ichi Yamamoto reflects upon the root cause of society’s chaos and confusion [at a Soka Gakkai leaders’ meeting that November], stating that people’s actions are a direct result of a materialistic lifestyle solely aimed at attaining maximum convenience and comfort.

Citing the passage “[If] there are practitioners of the Lotus Sutra here in Japan, he [Great Bodhisattva Hachiman] should take up his abode where they are” (The Writings of Nichiren Daishonin, vol. 2, p. 936), Shin’ichi asserts that through our Buddhist practice we can in fact activate the workings of the protective functions of the universe. He continues:

The important thing, however, is that we base ourselves solidly on chanting Nam-myoho-renge-kyo and never forget our mission of kosen-rufu, summoning all our strength and wisdom, and striving our hardest to find a way forward.[1]

At present, the world faces an unprecedented emergency in the form of the coronavirus pandemic. United Nations Secretary-General António Guterres has described this as the most challenging crisis the world has faced since World War II. Many of our fellow members, especially those in the healthcare field, are striving with all their might to protect their communities at the frontlines of this crisis.

To support these efforts, the youth division in Japan has been backing the global #StayHome movement urging people to refrain from non-essential and nonurgent outings. The publication of online exchanges between youth division leaders and the Soka Gakkai’s doctors division about COVID-19 in Japan and how people can navigate these uncertain times has also generated a positive response.[2] They also launched “Utatsuku,” an online collaborative song-making project aimed at using the power of music to inspire hope in the face of adversity.[3]

Toward the end of volume 18, the “Dynamic Strides” chapter describes how, amid the ongoing economic turmoil around the world, members throughout Japan attend their local New Year’s gongyo meetings at the start of 1974, firmly resolving that “now, in this trying period, was the time for them to stand up and, as Buddhists, bring hope, courage and vitality to their communities.”[4] Indeed, our Buddhist faith and practice give us the power to transform any and all adversity into a springboard for fresh advance.

The Seikyo Shimbun: A Compass Through a Turbulent World

As we find our Soka Gakkai activities limited due to the current emergency restrictions put in place to prevent the spread of the coronavirus in Japan, the Seikyo Shimbun is playing an even greater role in linking us together. In his recent essay “A Bastion of Life-Affirming Journalism,” published on April 20, Ikeda Sensei stresses: “The Seikyo Shimbun has the incredibly important mission of transmitting the wisdom for changing poison into medicine and creating value.”[5] He also says it should play a leading role in producing articles that encourage and empower, and “in uniting people’s hearts toward overcoming the challenges they face.”[6]

In the “Lion’s Roar” chapter, Shin’ichi sets guidelines for the Seikyo Shimbun and provides guidance to those involved in its publication. At a nationwide Seikyo Shimbun correspondents meeting on May 3, 1973, he reminds reporters never to treat readers as “faceless strangers, but as dear friends,” calling on them to “flexibly respond to readers’ needs,”[7] by sharing in their joys when they are happy, providing encouragement when they are sad, helping them get back on track when they are confused and protecting them when they are feeling weak.

In this way, volume 18 reveals how our mentor was directly involved in the founding and development of the Seikyo Shimbun. Last September, Sensei visited the newly completed Soka Gakkai World Seikyo Center in Shinanomachi, Tokyo, writing a new page of history for the publication, which just recently celebrated its 69th anniversary on April 20. A stone monument that stands at the entrance of the World Seikyo Center bears a plaque with a dedication written by Sensei, which includes the following words:

From the standpoint of Buddhism, the Seikyo Shimbun has a profound and solemn mission. I am confident that the lion’s roar of mentor and disciple striving together in shared purpose will issue forth forever from this great “bastion of the pen.”[8]

In this time of great uncertainty and anxiety, I hope the Seikyo Shimbun will continue to serve as “a compass guiding people through a turbulent world,”[9] and that it fulfills its mission as a truly humanistic newspaper echoing forth the powerful, courageous and hope-filled lion’s roar of mentor and disciple.

Responding to Our Mentor

The ethics of reciprocity—feeling gratitude for the kindnesses shown to us and desiring to respond to such actions—is a social norm that is commonly understood by all.

What can we say, then, of persons who are devoting themselves to Buddhism? Surely they should not forget the debts of gratitude they owe to their parents, their teachers, and their country. (“On Repaying Debts of Gratitude,” WND-1, 690)

Though we cannot choose our parents or the country into which we are born, we do have the choice to seek out and decide whom to take as our mentor.

The “Gratitude for One’s Mentor” chapter describes the stories and struggles of Soka Gakkai members who choose to take Shin’ichi Yamamoto as their mentor in life. This includes members of the Shiraito-kai, a young men’s division training group originally formed in 1968, who hold regular guidance and encouragement sessions with Shin’ichi, their hearts ablaze with a passionate seeking spirit to learn from their mentor.

There is also an account of a young women’s division member from Tottori Prefecture who challenges herself to participate in a dance number for a Soka Gakkai festival held in the San’in region in 1973. She earnestly practices the dance, “Pear Maidens,” celebrating the pears for which Tottori is famous, despite her physical disabilities caused by childhood polio, and performs most beautifully, filled with “profound gratitude to President Yamamoto for having helped her realize her personal mission.”[10]

This chapter also recounts Shin’ichi’s own commitment to repaying the debt of gratitude he owes to his mentor, second Soka Gakkai President Josei Toda. Following his appointment as third Soka Gakkai president in May 1960, he visits President Toda’s hometown, Atsuta Village in Hokkaido. The Soka Gakkai members living there witness firsthand the depth of Shin’ichi’s dedication to President Toda and decide to respond in kind. They resolve to “protect Toda’s hometown as Shin’ichi’s representatives”[11] and begin earnestly promoting kosen-rufu in the village, aligning their hearts with their mentor, constantly asking themselves what President Yamamoto would do in each situation.

The Atsuta members’ consistent day-to-day efforts result in the building of solid and broad ties of trust toward the Soka Gakkai, to the point that in September 1973, they are able to invite Shin’ichi to a community meeting taking place among local residents. Prior to this meeting, he also donates books to the local school libraries in the village, carrying on the tradition he had begun with his mentor while President Toda was still alive. The development of kosen-rufu in Atsuta can be seen as a testament to the actions taken by both Shin’ichi and the local members to repay the debt of gratitude they owe their mentors.

Those who always have their mentor in their hearts as they face life’s struggles are strong. When we make our mentor’s spirit of resolute commitment to kosen-rufu our own, we can bring forth the same life condition and reveal unlimited potential.[12]

The path of oneness of mentor and disciple is the core spirit of the Soka Gakkai; it is the lifeline of kosen-rufu. Throughout his life, Sensei has remained steadfast in his actions to repay his debt of gratitude to President Toda.

In essence, repaying one’s debt of gratitude to one’s mentor means, as stated in the “Gratitude for One’s Mentor” chapter, that the “disciples develop to the extent that they surpass their mentor, devoting themselves earnestly for the sake of the Law and working for the betterment of society.”[13] Firmly engraving the spirit of the three founding presidents in our hearts, let us stay true to the path of mentor and disciple and live our lives as proud disciples of Ikeda Sensei.

Translated from the April 22, 2020, issue of the Seikyo Shimbun, the Soka Gakkai’s daily newspaper. 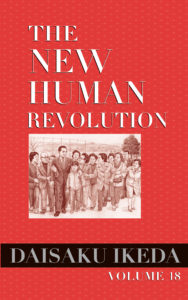 Lion’s Roar
In the summer of 1973, Shin’ichi Yamamoto’s novel The Human Revolution is adapted into a movie. He personally trains Seikyo Shimbun journalists.

Gratitude for One’s Mentor
Shin’ichi attends summer training courses and then visits his mentor’s hometown in Hokkaido to encourage the local members. He subsequently conducts guidance tours in Saitama, Shimane and Tottori prefectures, and, in November, Tochigi.

Moving Forward
Shin’ichi conducts a guidance tour of Shikoku. In Tokyo, he encourages the members who are struggling amid the recession.