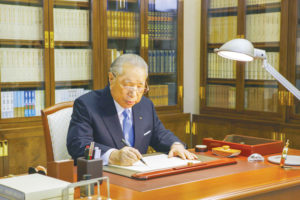 This essay appeared in the Nov. 5, 2018, issue of the Seikyo Shimbun, the Soka Gakkai’s daily newspaper.

I still vividly remember a particular autumn day in Shinanomachi, Tokyo (in October 1990). Together with precious friends of the youth division, we warmly welcomed Nelson Mandela (1918–2013), the invincible South African champion of human rights who had earlier that year emerged triumphantly from over 10,000 days (27 years) in prison.

As I shook his hand when he stepped out of the car on that sunny day, a shout of “Viva Mandela!” arose from the 500 young men and women gathered.

A performance of the beloved song of the South African people “Rolihlahla Mandela” by members of the Soka University Pan-African Friendship Society brought a bright smile to Mr. Mandela’s face.

I met Mr. Mandela again five years later (in July 1995), when he visited Japan as the newly elected president of South Africa. The first thing he mentioned was his memories of our previous meeting. He recalled the blue skies and the warm welcome he had received from so many youth, saying they had invigorated him. And he remarked that he would never forget the Soka University students singing for him.

He clearly treasured his encounter with Soka youth.

Youth have immeasurable power. They have fearless vitality, the courage to rise to challenges and take initiative, and shining eyes fixed squarely on the future. This alone makes them wealthier than any tycoon.

The main subjects President Mandela and I discussed in our meeting were education and successors.

“One tall tree does not make a forest,” I said. “Unless other trees grow to the same height, you cannot have a large grove.” President Mandela nodded in agreement.

President Mandela sent his condolences and prayers for recovery following the March 2011 Tohoku earthquake and tsunami. At that time, he also sent me a poem, which included the words: “We are old / but / We are told / that / We are the world.”

I replied with a poem of my own: “No greater joy / than seeing a growing / young forest / that will revitalize the world.” President Mandela was reportedly delighted by my response.

This year (2018) was the centennial of President Mandela’s birth. I am certain that with his famous smile, he is watching over our inspiring network of young Soka global citizens, which is spreading like a great forest of hope throughout Africa and the rest of the world.

Youth have immeasurable power. They have fearless vitality, the courage to rise to challenges and take initiative, and shining eyes fixed squarely on the future. This alone makes them wealthier than any tycoon. The main subjects President Mandela and
I discussed in our meeting were education and successors.

“One tall tree does not make a forest,” I said. “Unless other trees grow to the same height, you cannot have a large grove.”
President Mandela nodded in agreement.

In November 1953, 65 years ago, the Soka Gakkai Headquarters moved from Tokyo’s Nishi-Kanda to Shinanomachi.

A short time later, on the occasion of the 10th memorial (9th anniversary) of founding Soka Gakkai President Tsunesaburo Makiguchi’s death, second President Josei Toda made a powerful declaration. He said that, as Mr. Makiguchi’s disciple, he would make his mentor’s great philosophy known throughout the world, that he would keep up his fight until the theory of value was recognized as a major philosophy. And he called on us, his disciples, to carry this out if he couldn’t do it himself in his lifetime.

Nichiren Daishonin’s Buddhism of the Sun has now spread to 192 countries and territories, bringing the light of hope, happiness and peace to humanity.

Who has opened the way for this new era of worldwide kosen-rufu? None other than our members, ordinary men and women, in every country and territory who have been striving for kosen-rufu in accord with Nichiren’s wish and intent, from the pioneering days of our movement until now.

I hope that the youth living in today’s wonderful era will never forget the great debt of gratitude they owe to these pioneers. I call on you to grasp the torch of successors and build a new age—in a way that befits the youth of Soka!

“Let us sound the solemn bell announcing the dawn of kosen-rufu!” That was the slogan I presented to the members who joined me in the struggle during the Yamaguchi Campaign.[1]

With that as my personal resolve, I took the lead and stirred three great waves of propagation, from October 1956 to January 1957.

Members from throughout Japan proudly and resolutely traveled to Yamaguchi of their own accord to participate in the campaign. They came from Tokyo, Kanagawa, Saitama, Aichi, from Hokkaido and Tohoku in the north, from Fukuoka and Shikoku, and from Osaka, Hyogo and the rest of Kansai. Each of these individuals striving with me to realize our mentor President Toda’s cherished dream of 750,000 member households shone as a first-rate champion of kosen-rufu.

During the second wave of the campaign (in November 1956), I visited Shoka Sonjuku in Hagi, in Yamaguchi. This was the private academy where Yoshida Shoin (1830–59), who was deeply admired by both Mr. Makiguchi and Mr. Toda, fostered many capable individuals, a number of whom later played key roles in bringing about the Meiji Restoration [which led to Japan’s modernization].

Yoshida Shoin said to the effect that people with a lofty goal always have friends to share it with and a mentor to learn from.[2]

How wonderful it is to have a mentor in life during one’s youth and fellow members with whom to share the loftiest goal of all, kosen-rufu!

When Mr. Toda spoke of Yoshida Shoin, he always focused his perceptive gaze on Shoin’s disciples, in particular, the youthful duo Takasugi Shinsaku (1839–67) and Kusaka Genzui (1840–64). He firmly believed that at the core of major social reform lay the passion and energy of youth generated from a united commitment.

This is a golden rule of history. Now, in accord with this, the bell heralding the dawn of the new era of worldwide kosen-rufu is tolling vibrantly.

This August, more than 10,000 members joyously took part in a youth festival in Singapore. SGI leaders from India, Thailand, Malaysia and other South Asian nations also gathered in Malaysia, vowing together to create a peaceful world through their own courageous actions.

In August as well, youth from South Korea and Japan had meaningful encounters during a training course held in Japan.

In September, the triumphant “50,000 Lions of Justice Festival” was held amid great excitement in nine cities across the United States. The SGI-USA youth who participated in that event are now taking the lead to create inspiring discussion meetings in this month of the Soka Gakkai’s founding to bring together as many new friends as possible.

In Argentina, Brazil and other Latin American nations, as well as in Europe, in Oceania and in Africa, young people are advancing with ever-growing momentum to usher in a new age shining with human dignity and hope.

The grand, magnificent treasure tower that emerges from the earth in the Lotus Sutra actually exemplifies the life of every living being, of each individual person. Every person, regardless of race, ethnicity, personal origin or profession, is an infinitely dignified treasure tower, a “complete entity” of the Mystic Law.

That’s why every person deserves respect, and why no one should be left in the darkness of lonely despair.

The aim of Buddhist practice is to help those assailed by self-doubt understand that they are profoundly respectworthy and possess a truly noble mission, so that they can join us in leading victorious lives filled with hope and lofty aspirations.

Youth are the future. They are humanity’s most precious treasure. Through your united efforts, please forge one new friendship after another and enable everyone to stand tall as treasure towers of profound respect for the dignity of life, each shining with their unique individuality. This is the great challenge of making the Buddha’s words a reality (see “The Opening of the Eyes,” The Writings of Nichiren Daishonin, vol. 1, p. 278) with the true commitment of practitioners of the Lotus Sutra.

Many newly inspired young Bodhisattvas of the Earth are energetically participating in the youth general meetings and music festivals taking place across Japan, from Hokkaido in the north to Kyushu and Okinawa in the south. I would also like to express my sincere gratitude to the men’s and women’s division members, and volunteers assisting with these events, for their warm support of our young people.

Let’s chant Nam-myoho-renge-kyo so that through these events, the performers and all youth and future division members will create a turning point in their faith and give greater momentum to the development of their golden network of friendship.

The English philosopher Bertrand Russell (1872–1970), who warned of the threat to humanity’s survival posed by nuclear weapons, declared: “It should be one of the aims of education to make young people aware of the possibilities of worldwide cooperation and to generate the habit of thinking about the interests of [humankind] as a whole.”[3] These words continue to ring true today.

Recently, the United Nations World Programme for Human Rights Education—a continuation of the U.N. Decade for Human Rights Education that ended in 2004—selected “youth” as the focus of its fourth phase. The purpose of this program is to promote the development of a culture of human rights and a common understanding of basic principles and methodologies of human rights education. Since 2005, new themes have been set and implemented every five years. The fourth phase, with youth as the focus, will begin in 2020.

The SGI took part in the selection of this theme, joining the discussion through participation in the working group, submitting joint statements and other activities.

In my annual peace proposals, I have also consistently called for human rights education for youth, and I am delighted that this will now be the focus of the U.N. program.

The empowerment of youth has become a global issue. That is why the Soka Gakkai must continue advancing together with young people and fellow members around the world in beautiful unity as “inseparable as fish and the water in which they swim” (“The Heritage of the Ultimate Law of Life,” WND-1, 217).

As President Mandela and I walked together after our meeting 28 years ago (in 1990), I said that surmounting hardships and triumphing over struggles are what make a person great, and that true justice would be demonstrated 100 or 200 years from now.

My youthful disciples who share my spirit, I call on you to press forward boldly, with confidence and optimism, on the unsurpassed path of human revolution, toward the future, toward victory! WT