The SGI-USA launches toward Oct. 2, 2020, the 60th anniversary of the kosen-rufu movement in America, by honing in on the foundational elements of propagation, member care, study and contributions.

SANTA MONICA, Calif., Sept. 28—On Oct. 2, 1960, Daisaku Ikeda had been the third Soka Gakkai president for just five months when he traveled to the United States, Canada and Brazil to sow the seeds of Nichiren Daishonin’s Buddhism of the Sun around the world. 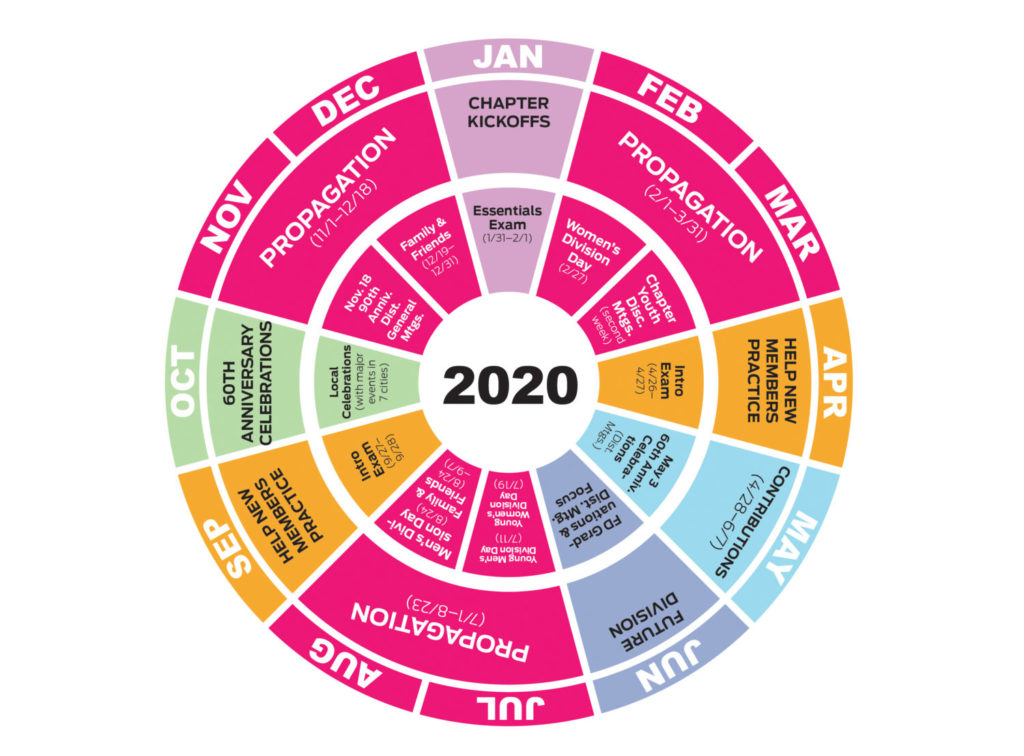 In the United States, President Ikeda visited seven cities, meeting with the earliest members, many of whom were Japanese women married to American servicemen, struggling with isolation in a foreign land.

President Ikeda instilled in them their profound mission as Bodhisattvas of the Earth—those charged with the mission to spread the Daishonin’s humanistic teachings for the peace of the land. And he established the first districts, creating a framework for members to carry out their Buddhist practice, centered on the district discussion meeting.

Armed with this sense of mission, these pioneers, most of whom spoke little English, introduced Nichiren Buddhism to the west. Speaking to an American member here in 1965, President Ikeda declared: “If you have solidified your resolve to achieve kosen-rufu, I can safely say that my purpose in coming to this country has been fulfilled. It’s enough for a single individual, for you, to rise up with the same spirit as me. Just as a great river begins from a single drop, a great river of peace in America will begin from you. I entrust America to you.”[1]

Launching a Roadmap to Victory

With the SGI theme of the Year of Advancement and Capable People, and launching toward Oct. 2, 2020—the 60th anniversary of President Ikeda’s first visit and the start of the kosen-rufu movement in America—the SGI-USA has created a “2020 Roadmap to Victory” by honing in on the four foundational elements of propagation, member care, study and contributions.

The SGI-USA Central Executive Committee voted to approve the direction for 2020 during its final quarterly conference of the year, held Sept. 28 at the SGI-USA Headquarters in Santa Monica, California.

In a message to the conference, SGI President Ikeda shared that the Soka Gakkai will forever be a “treasure tower of human harmony,” where members support and protect one another, while enabling many more still to rise up as Bodhisattvas of the Earth. President Ikeda continued:

Citing the passage, “You should rise and greet them from afar, showing them the same respect you would a Buddha” (see The Lotus Sutra and Its Opening and Closing Sutras, p. 365), Nichiren Daishonin declares: “You should respect one another as Shakyamuni and Many Treasures did at the ceremony in the ‘Treasure Tower’ chapter” (“The Fourteen Slanders,” The Writings of Nichiren Daishonin, vol. 1, p. 757).

After the treasure tower rises from the earth, its doors open and Many Treasures Buddha offers the seat beside him to Shakyamuni, saying, “Please join me.” This image of the two Buddhas seated side by side indicates that the grand Ceremony in the Air commences once Shakyamuni and Many Treasures are seated together. Using this as a prime example, Nichiren is teaching us the importance of respecting and treasuring one another as we advance toward kosen-rufu and the eternal perpetuation of the Law.

As leaders, I hope all of you can absorb this passage with your hearts and minds, and display the utmost warmth as you expand our beautiful realm of trust and encouragement. In addition, please be the first to set the example of taking action based on faith and build a rock-solid SGI-USA that serves as a model for the world.

Looking ahead to next year’s significant milestones, which include the 60th anniversary of President Ikeda’s inauguration as third Soka Gakkai president on May 3, 1960, and the 90th anniversary of the Soka Gakkai’s founding on Nov. 18, 1930, the Executive Council approved SGI-USA General Director Adin Strauss for a new three-year term. 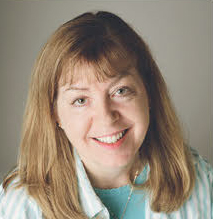 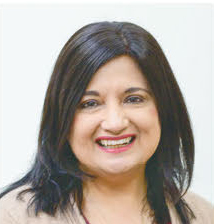 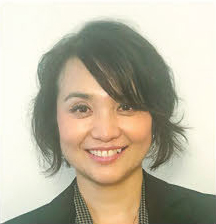 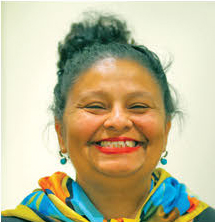 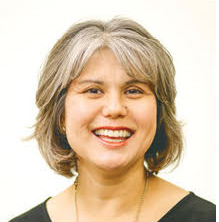 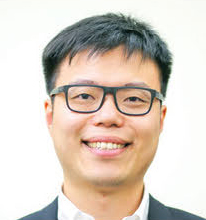 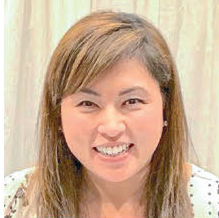 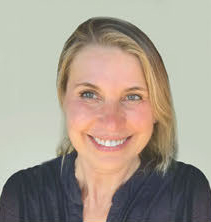 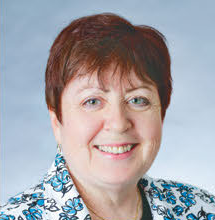 Mr. Strauss also announced a round of national leadership appointments. They are:

Barbara Snyder, who has served as
an SGI-USA vice general director since December 2014, will take on the role
of East Territory vice women’s leader.
At the territory level, the following appointments were made: 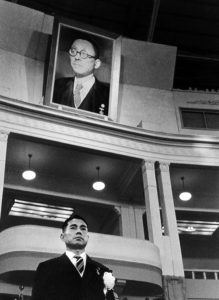 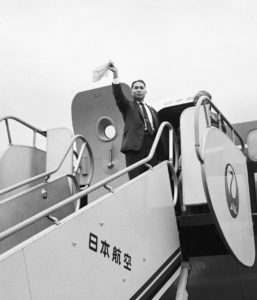 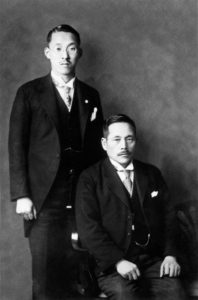 To commemorate next year’s milestones, the SGI-USA will challenge introducing 6,000 new youth in 2020 through Gohonzon conferrals and families joining the SGI-USA. To support this and other 2020 endeavors, the SGI-USA created a 2020 calendar wheel that highlights the key focus
and supporting activities for each month (see graphic).
Toward the January 2020 Chapter Kick-off Meetings, the SGI-USA will focus on appointing many chapter youth leaders as a vital step toward next year’s initiatives.

• 2020 Discussion Meeting Format: Based on the success of the 2019 July Youth Discussion Meetings, the SGI-USA will prepare a monthly presentation to be utilized at all discussion meetings during the small-group dialogue sessions. The presentation material will also appear in the World Tribune and online at www.sgi-usa.org the month prior to the meeting.

• Development of Groups and Group Leadership: As the average district size continues to grow in the SGI-USA, district leaders alone cannot fully support their membership. Thus, in 2020, the SGI-USA will focus on the development of groups and group leaders.

-20 members and guests attend discussion meetings at least two times during the year.
-20 members and guests subscribe to the SGI-USA publications.
-2 people receive the Gohonzon and start practicing Nichiren Buddhism (in any division).
-8 members are sustaining financial contributors.
-3 district divisional leaders, not vices (men’s division + women’s division + one youth division).
-2 functioning groups (each must hold at least one group meeting during the calendar year).

In a change for next year: from Aug. 24–Sept. 7, the SGI-USA will hold a two-week Family and Friendship Period, with no formal activities (outside Kosen-rufu Gongyo Meetings). This will be a time to focus on quality time with our families and friends, and deepen our bonds.

The SGI-USA has an existing Family and Friendship Period during the winter holidays. In 2020, it will be held from Dec. 19–31.

The CEC also discussed creating a clear roadmap for all graduating youth members so that they are warmly welcomed into the men’s and women’s divisions, and fostered as successors. This includes appointing as district leaders those who meet the leadership criteria.
Meanwhile, the SGI-USA will continue to focus on developing the district through personal encouragement and home visits.

Meanwhile, the online Introductory Exam will be offered two times next year:

For the monthly district study meeting, members will continue to study The New Human Revolution study guide being carried monthly in Living Buddhism, plus one topic from An Introduction
to Buddhism to help new members prepare for the Introductory Exam.

In 2020, eligible new members who have been practicing for at least one year will be interviewed by district–national leaders before they can start participating in contribution in an effort to educate them on the spirit and purpose of making financial offerings.

In addition, the CEC reaffirmed the remaining focus for 2019. Regarding Sustaining Contribution, the SGI-USA will focus on:

The organization will then turn its attention to:

1. Gathering 55,000 members and guests for the November District General Meetings; and
2. Promoting two publications per district in December.

The CEC voted to hold special 60th anniversary commemorative celebrations to honor President Ikeda’s first visit to the United States, which commenced his efforts to spread worldwide kosen-rufu. These celebrations will take place from Oct. 3–4 across the country, with major celebrations held in the seven cities that President Ikeda visited on his first trip: Chicago, Honolulu, Los Angeles, San Francisco, Seattle, New York and Washington, D.C.

In a guidance teleconference with the Executive Council, SGI General Director Yoshitaka Oba shared that members around the world are striving to study and put into action President Ikeda’s guidance from The New Human Revolution.

Mr. Oba noted that President Ikeda visited the U.S. 27 times, and many members have received firsthand encouragement from their mentor. “Therefore, I would like all the leaders and members of the SGI-USA to have the sense of mission that ‘I am the SGI’ and ‘I am Shin’ichi Yamamoto,’[2]” Mr. Oba said. “I would like to you to feel this great sense of mission that you must achieve kosen-rufu together with Sensei, and I would like the SGI-USA to be the role model for the world.”
To accomplish this, Mr. Oba said that giving personal guidance to individuals and families is key. President Ikeda writes of one-to-one encouragement in The New Human Revolution:

“Giving guidance to individuals or families is an extremely time-consuming, inconspicuous activity, but it serves to nurture the ‘roots’ of people’s faith. Only when a tree’s roots spread and sink down deep into the ground can it grow toward the heavens and bring forth green leaves and branches.

“In much the same way, the source of all development in the realm of kosen-rufu lies in sharing the sufferings of the members, answering their questions so as to relieve them of any doubts, and making it possible for them to joyously exert themselves in faith filled with confidence and hope . . .

“We propagate Buddhism to lead others to happiness; in this respect, giving personal guidance in faith to new members is vital. As leaders, you must constantly ask yourselves: How many people in my district, group or unit have stood up resolutely in faith and received benefit? This is a crucial point to remember.” (NHR-2, 161)

Joyfully Advancing in Our Human Revolution

“Never Allow the True Teachings of Nichiren to Be Destroyed”