The ceremony on March 16 was exhilarating. Second Soka Gakkai President Josei Toda announced that he was passing the baton of kosen-rufu to the youth. The hearts of his young disciples burned with enthusiasm. Their proud sense of mission leapt up like dancing flames.

On that day in 1958, some 6,000 young disciples had gathered with their mentor, President Toda, whose life was quietly ebbing away. Everyone celebrated that landmark day with great joy and excitement. Brave young men and women dedicated to kosen-rufu had assembled from all over Japan. They shook hands, patted one another on the shoulder and talked and laughed together. It was a joyful vision of future triumph.

On March 1, 1958, Mr. Toda said to me: “The rest will be up to you, Daisaku. I’m counting on you.” A few days later, he made a suggestion, “Let’s conduct a ceremony that will serve as a trial run—a dress rehearsal—for kosen-rufu in preparation for the future.” Mr. Toda knew that he would never rise again, never again stand at the head of the march for kosen-rufu, directing its advance.

I grasped that spiritual baton of the unity of mentor and disciple, and I ran with it. I ran and ran. 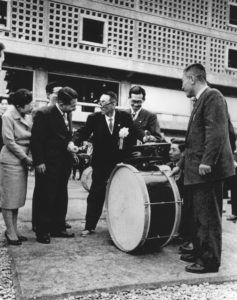 March 16 was a ceremony to eternally honor and pay tribute to the selfless spirit of Mr. Toda, who had lived in complete accord with Nichiren’s words, and to pass that legacy on to the next generation. At the same time, it was a private ceremony between the two of us—a ceremony of the oneness of mentor and disciple—in which Mr. Toda transferred the seal of succession, the mission to achieve kosen-rufu to me.

Profoundly aware of the deep significance of this occasion, I took on full responsibility for carrying it out successfully. A Japanese government leader was to attend the March 16 ceremony.

He and Mr. Toda were friends. But the morning of the ceremony, the government leader called to say he could not attend after all. Other parties had intervened and caused trouble. Mr. Toda was enraged. Over the phone he shouted, “Are you going to break your promise to all of these young people?!” When he had hung up, he said to himself: “Politicians! They always compromise. Now this one has let me down. That is the nature of Japanese politicians.”

He knew how unimportant politicians really were, and he took the cancellation in stride.

“No matter who attends or doesn’t attend, we’re going to hold this ceremony for our young people!” He knew, in his heart of hearts, that as long as the young people who would faithfully inherit his legacy were there, that was all that mattered.

Even before the date for the ceremony had been set, Mr. Toda thought of various ways to encourage the youth. He had plenty of hot pork soup prepared for the young members who would arrive first thing in the morning, hungry and cold. Three hogs were butchered for soup, and Mr. Toda gave instructions to keep their hides. After he passed away, I had the hides tanned and made into pen cases, which I presented to 107 youth division representatives. I wanted to be certain they would not forget their mentor’s spirit, and that they would study hard and keep up the struggle for kosen-rufu for the rest of their lives. For us, the great ceremony on March 16 showed clear proof that “the assembly at Eagle Peak has not yet dispersed” (Gosho zenshu, p. 757).

It was said by some that after his death the Soka Gakkai would “disintegrate in midair.” But I was determined to make certain his words, his hopes and dreams came true. I grasped that spiritual baton of the unity of mentor and disciple, and I ran with it. I ran and ran.

Nichiren writes, “If you want to understand what results will be manifested in the future, look at the causes that exist in the present” (“The Opening of the Eyes,” WND-1, p. 279). A powerful determination and our actions in the present moment determine the future. March 16 is the eternal starting point of true cause, when all disciples stand up to be counted. For me, each day is a day of fresh commitment, each day is March 16. WT