WESTON, Fla., Feb. 2—Celebrating the SGI-USA’s great achievement of gathering 50,000 Lions of Justice on Sept. 23, 2018,[1] SGI President Ikeda gifted a stunning eight-piece Chihuly glass sculpture to the youth of America. He asked that it be displayed as a symbol of the “shared triumph of mentor and disciple.”

This significant artwork was last seen in public 30 years ago. The creator, Dale Chihuly, is a renowned contemporary American glass artist who has revolutionized the art form over the last five decades.

An unveiling ceremony took place on Feb. 2 with representative SGIUSA youth leaders who were attending the SGI North America and Oceania Study Conference that weekend at the Florida Nature and Culture Center.

The stately sculpture, approximately 14 feet wide and 8 feet high, is displayed in the Successors Room of the FNCC’s Ikeda Hall exhibition building.

Gary Murie, the SGI-USA Director of Exhibits and Design, noted that the gift expresses a bold move toward the future because of the modern style of the piece. “The Successors Room is about entrustment and inspiring the youth, the future generations, to unite in spirit with their mentor, be bold and lead the way,” Mr. Murie said. “I believe Sensei’s heart is to encourage the youth to create a better future for America.”

Each piece of the eight-glass sculpture is unique in color, shape and design, but when drawn close together, like pieces of a puzzle, they seem to form a perfect unity.

SGI-USA General Director Adin Strauss later remarked that the gift is like an explosion of light, color and joy reminiscent of a starburst, when countless stars are born at once, a phenomenon that President Ikeda has spoken of:

In the beautiful swirling galaxies found throughout space, there is an astronomical phenomenon known as a starburst, during which thousands or hundreds of thousands of massive stars are all born at once . . . This event is one of the great dramas of the universe.

There are also periods in the momentous advance of kosenrufu when great numbers of capable people suddenly burst on the scene. And this is what we are presently seeing. (Oct. 31, 2014, World Tribune, p. 4)

Most important is that the gift “is a symbol of Sensei’s entrustment of kosen-rufu to the youth,” Mr. Strauss noted.

Echoing this call, SGI-USA Young Women’s Leader Maya Gunaseharan, in her remarks at the unveiling ceremony, said, “As we view this Chihuly sculpture, let’s renew our vow with our mentor in our hearts so we can create an incredible history of human revolution with Sensei this year.” WT

SGI-USA members can view the installation during the allotted time at all FNCC conferences. Martin Saito reported for the World Tribune. 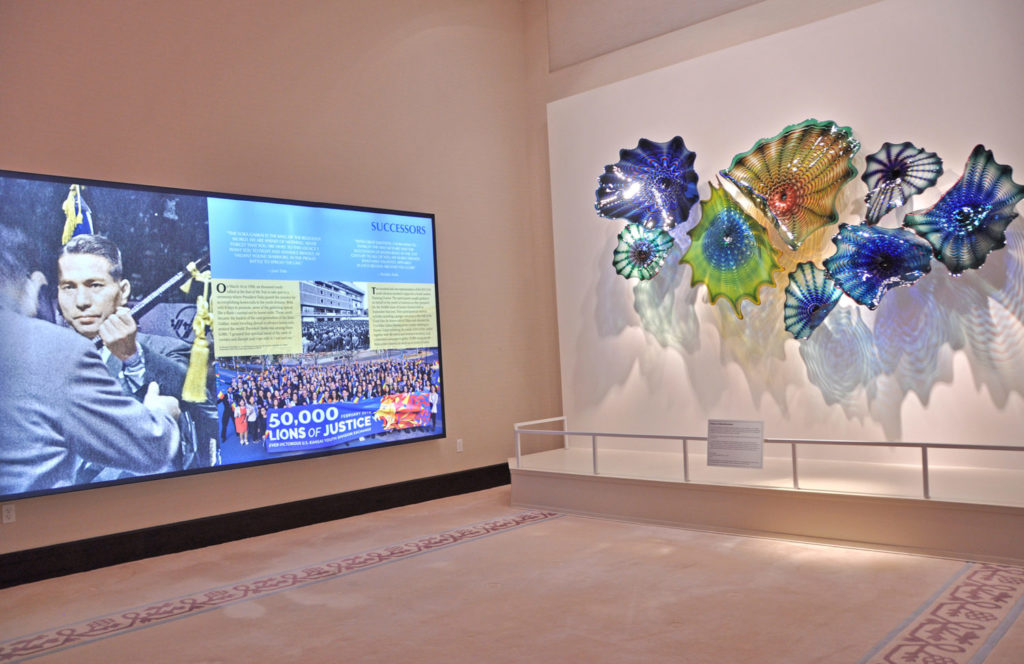 The Panel of Entrustment

To the left of Chihuly’s glass sculpture is a large panel displaying three photos that capture the spirit of entrustment. One is a striking image of the young Daisaku Ikeda on May 8, 1960—just five days after his inauguration as the third Soka Gakkai president—bestowing a flag to a newly appointed leader in Osaka. Another photo captures the March 16, 1958, gathering, when second Soka Gakkai President Josei Toda, just two weeks before his death, entrusted 6,000 youth with the mission and responsibility of achieving kosen-rufu in Japan.

The third image is a commemorative photo of the Lions of Justice Group, the 201 youth who attended the First SGI-USA Chapter through National Youth Leaders Training Course in Japan, held in February 2018. The photo was taken on Feb. 4, 2018, just outside the Nakanoshima Central Civic Hall in Osaka, a treasured landmark in the Soka Gakkai’s history representing the united spirit of mentor and disciple to fight against injustice.

Impressions From the Unveiling Ceremony

Vinaiyak Sundra (Toronto)
It portrays the principle of “cherry, plum, peach and damson.” Each component is very unique, but complements one another. They possess a unity in diversity. It’s a beautiful depiction of the 50,000 youth. Everyone from all walks of life coming together for a sole purpose.

Margaret Nelson (Greenville, N.C.)
This was the greatest gift we could have received; art that represents a starburst of capable people in America. It sparked even more creativity, enthusiasm and energy within me, and helped me realize the importance of learning more about American culture to advance kosen-rufu.

Kayoko Tsujimoto (Greenwich, Conn.)
When I learned that the SGI-USA received a gift from Sensei in response to our 50K victory, it shattered many doubts I was carrying in my life.

I could see the vision of kosen-rufu within the glass itself. The colors looked like they were waves of one person’s happiness after another. I renewed my determination to do my best more so than before. I really felt refreshed. 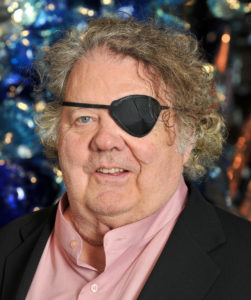 About the Artist | Dale Chihuly

Dale Chihuly is the most important glass artist of our time, having revolutionized glass sculpting from decorative art into fine art collected all around the world. While traditional glass factory production focuses on symmetry, a defining principle of Chihuly’s work is asymmetry and irregularity spawned through his innovative techniques.

In 1976, Chihuly was involved in a serious car accident, causing him to lose sight in his left eye. Unable to safely work with the hot molten glass, a physically demanding process, he now directs his team. This role has allowed Chihuly to work on a larger scale and push the boundaries of his material even more.

Chihuly has dedicated himself to fostering others since his youth. In 1994, he co-founded Hilltop Artists in Tacoma, Washington, his birthplace. The glass arts program serves over 650 public school students every year, and seeks to transform lives through the power of art and mentorship. For the past 25 years, the program has been recognized for using glass art to connect young people from diverse cultural and economic backgrounds to better futures.

To aspiring young artists, Chihuly offers this advice: “Surround yourself with artists and see as much art as possible. Go with your gut and create something that nobody has ever seen before.”[2]

Living My Life to the Fullest

The Infinite Power of the Bodhisattvas of the Earth