The following is an essay from SGI President Ikeda’s new series “Our Brilliant Human Revolution,” which originally appeared in the Aug. 23, 2019, issue of the Seikyo Shimbun, the Soka Gakkai’s daily newspaper.

My mentor, second Soka Gakkai President Josei Toda, solemnly urged me on many occasions to engrave certain passages from Nichiren Daishonin’s writings in my life.
One of those passages was:

So long as a practitioner of the Lotus Sutra remains unwavering in faith, free of all false alliances, entrusting himself wholeheartedly to the Lotus Sutra and practicing in accordance with the Buddha’s golden words, he will without fail be able to prevent disaster and prolong his life in this present existence, to say nothing of in the life to come. Splendid recompense will be his, and he will fulfill his great vow to broadly proclaim and propagate the Lotus Sutra [the great vow for kosen-rufu]. (“Letter Sent with the Prayer Sutra,” The Writings of Nichiren Daishonin, vol. 2, p. 460)

In my 72 years practicing Nichiren Buddhism as Mr. Toda’s direct disciple, I have always followed these words.

It is my highest pride and honor to have worked to fulfill the great vow for worldwide kosen-rufu together with comrades in faith who share my spirit. And my unchanging prayer is that all members of our precious Soka family will enjoy good fortune and benefit in the form of long, secure, fulfilling lives, and that each without exception will receive “splendid recompense” for their dedicated efforts. 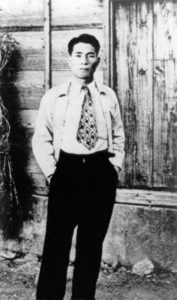 Under bright blue summer skies at the beginning of this month (August 2019), I visited the Soka Gakkai training center in Saitama Prefecture.

I have many fond memories of Saitama. I see the faces of countless Saitama members in my mind’s eye.

With “Unshakable Unity” as their motto, our Saitama members have advanced in solidarity along the path of truth and justice for five decades.

I clearly remember a discussion I once had with members at the training center in Saitama about the spirit of “refuting the erroneous and revealing the true.”

In the past, Hidaka, the city where the training center is located, was on a highway that led from Kamakura to Gunma and Nagano prefectures. Nichiren Daishonin traveled this road on his way to his place of exile on Sado Island and made his triumphant return journey along it after he was pardoned.

Also this month, my wife, Kaneko, and I traveled north in the vicinity of this historic road to visit the Nagano Training Center. With its lovely gardens tended diligently by local members, this center truly mirrors the description in “Life Span,” the 16th chapter of the Lotus Sutra:

The halls and pavilions in its gardens and groves
are adorned with various kinds of gems.
Jeweled trees abound in flowers and fruit
where living beings enjoy themselves at ease.[1]

Leaders of our movement from throughout Japan and around the world have gathered at this center in Nagano filled with seeking spirit to study, talk and learn together, accumulating the causes for future success.

Cultivating our lives is indeed the foundation for winning.

The tricolor Soka banner flies vibrantly over the Nagano Training Center. The young staff members who raise the flag each morning observe a tradition of bowing in respect toward it. Though perhaps unnoticed by others, their sincerity is witnessed by the protective functions of the universe. They do this in the spirit of engaging in a solemn ceremony of raising the banner of victory of mentor and disciple.

My wife and I greeted the members looking after the center and expressed our profound gratitude for their efforts. Forty years have passed since my first visit there. I have watched over the growth and activities of many of those members in Nagano from the days of their youth. Together we have created history, and I was deeply reassured to see their smiling faces, reflecting the truth that “unseen virtue brings about visible reward” (“The Farther the Source, the Longer the Stream,” WND-1, 940).

Nichiren taught his disciples the importance of developing inner strength and mental fortitude: “Untempered iron quickly melts in a blazing fire . . . But a sword, even when exposed to a great fire, withstands the heat for a while, because it has been well forged” (“The Hero of the World,” WND-1, 839).

No one is stronger than individuals who have forged their lives like fine swords. As the Daishonin also says, “Iron, when heated in the flames and pounded, becomes a fine sword” (“Letter from Sado,” WND-1, 303). Indeed, the aim of Buddhist practice and Soka Gakkai activities is to develop ourselves into just such strong individuals.

Since the time of our founding Soka Gakkai President Tsunesaburo Makiguchi, it has been a Soka Gakkai tradition for members to spend the hot summer months engaged in Buddhist study and activities aimed at personal growth.

At gatherings of the young men’s division training group Suiko-kai (Water Margin Group), members studied many works of world literature under Mr. Toda’s tutelage. One of those works was Robinson Crusoe by Daniel Defoe (1660–1731), an adventure story telling the tale of its eponymous hero’s 28-year struggle to survive after being shipwrecked on a deserted island. This year marks the 300th anniversary of Robinson Crusoe’s publication.
I will never forget Mr. Toda talking about his personal experience of being imprisoned and drawing parallels with the travails of Robinson Crusoe.

Everything, even the most painful experience, has meaning. The time is certain to come when you’ll see it as a precious treasure and transform it into your mission.

The book’s author, Defoe, also experienced much adversity in his life. He was arrested on the charge of seditious libel and sentenced to three days of public shaming in the pillory. In response, however, he composed a satirical poem about the incident, turning it into an opportunity to proclaim the truth to the people: “Tell them it was because he was too bold, / And told those Truths, which shou’d not ha’ been told.”[2] The poem was distributed to spectators and, as a result, instead of casting stones at him while he was in the pillory, as was the common practice, it is said that people threw flowers at him. It was a dramatic example of turning adversity into triumph.

Mr. Toda stressed to us, the youth, that the great teaching of Nichiren Buddhism we embraced was a teaching of human revolution with the power to transform any karma, or destiny, and he urged us to always have courage and hope.

Even if right now you may find yourself in incredibly difficult circumstances and feel like you can’t go on, please know that this is not the end. Everything, even the most painful experience, has meaning. The time is certain to come when you’ll see it as a precious treasure and transform it into your mission.

Training in the Soka Gakkai means forging invincible faith so that you will not be defeated by any problems or difficulties you face. WT

To be continued in an upcoming issue.

The Soka Gakkai Is a Wellspring of Courage