Jan. 17 approaches. The anniversary of the Great Hanshin Earthquake is near. In the three years that have passed since [1995], I have never forgotten, even for a day, our friends in the stricken Kobe, Osaka and Awaji regions. Day after day, I have prayed for the earliest possible reconstruction of the disaster areas, for the welfare and happiness of the victims, and for the peace of those who died.

When I heard the news that day of a great earthquake in the Kansai area, I immediately called on the top leaders of the Soka Gakkai to make an all-out effort to send aid and assistance to the area. We set up crisis management centers in both Kansai and Tokyo. We opened our community centers in the areas hit by the earthquake as shelters for those left homeless by the disaster. We rallied assistance nationwide, and we sent members of our doctors and nurses divisions to the scene.

I was scheduled to give a lecture at Hawaii’s East-West Center, but I delayed my departure to the last moment, until I was certain that our aid efforts were on track. As I left Japan, I continued to chant Nam-myoho-renge-kyo for all our friends in the stricken area. When I had finished my major commitments in Hawaii, I flew back directly to the Kansai region.

Once there, I was deeply moved and filled with humble appreciation for our members when I heard firsthand reports of their dedicated relief activities. A motorbike brigade of some 3,000 members of the youth division, with 900 motorbikes at their disposal, had been working day and night without rest to deliver—over streets and roads rendered impassable to cars and trucks—much-needed relief supplies to victims. Some of our members had been injured themselves, yet they continued to assist other people who were hurt and injured. Numberless members, whose homes had been destroyed by the earthquake or the fires that broke out in its wake, put their own losses aside to visit other victims, bringing comfort, help and encouragement.

The women’s division members were also indispensable in the effort to search for victims in the rubble. Because they prayed for the welfare of their neighbors every day and were involved in activities to promote friendship in their neighborhood and the local community at large, they knew better than anyone just how many people lived in each destroyed building and apartment. 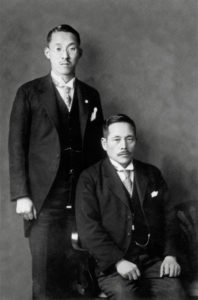 Second Soka Gakkai President Josei Toda (left) with his mentor, Soka Gakkai founding President Tsunesaburo Makiguchi, circa 1930. Before his conversion to Nichiren Buddhism, Mr. Makiguchi organized his elementary school students to collect aid for victims of an earthquake, teaching them that they could do their part to help.

The mass media around the world reported on the Soka Gakkai’s rescue and relief efforts, and praised them unstintingly.

It is easy to pay lip service to the sanctity of life. It is a simple matter to talk about contributing to society and working for peace. But what really counts is how an individual, how a group actually responds when people’s lives are in danger, when disaster strikes.

Our first Soka Gakkai President Tsunesaburo Makiguchi also took the lead in relief activities during a natural disaster. When the Great Tokyo Earthquake occurred in 1923, he was principal of the Shirogane Elementary School. He organized his sixth-grade students into a group, which he named “The Little Good Deed Club,” to collect aid for victims of the earthquake. No doubt he chose this name because he wanted to find a way to tell his students that, young as they were, they could do their part to help.

The children, pulling small handcarts, visited the undamaged houses in the area, saying to each resident: “We’re from the Shirogane Elementary School.

If you have anything you can spare, please donate it to the victims of the earthquake.” Though at first they felt shy, as they made their rounds, their faces began to glow with pride.

Not to stand idly by when we see someone in trouble, but to reach out a helping hand—this is the essence of true humanity and the spirit of Buddhism.

Not to stand idly by when we see someone in trouble, but to reach out a helping hand—this is the essence of true humanity and the spirit of Buddhism.
Five years later, in 1928, Mr. Makiguchi converted to Nichiren Buddhism and began to walk the path of great good deeds.

In the final chapter titled “At the Helm” of volume seven of The New Human Revolution, I related the story of a large group of our Niigata members who, on the way home from a pilgrimage to the head temple[1] by chartered train, ran into a terrible snow storm and were stranded for several days. I wrote of this incident because I wanted to leave a record of the Soka Gakkai spirit demonstrated by the Nagaoka members who made valiant efforts to come to the aid of their stranded fellow members.

While that chapter was being published in installments in the Seikyo Shimbun, I received word that the stationmaster of Miyauchi Station, where the drama unfolded, was still alive and well. He had worked so hard to assist the passengers. Today he is 89.

The considerate and selfless actions of the Soka Gakkai members he witnessed during the crisis left him with a very positive impression of our organization, and four years ago he became a member himself. I asked his local leader to deliver a message of thanks from me and a Soka Gakkai gold pin.

In this age wracked with egoistic rivalries and a pervasive alienation of individuals from each other, we in the Soka Gakkai are working to bring happiness to others, to serve the people and society, and to create a network of care and concern. We have a name for our effort; we call it kosen-rufu. WT

A Fresh Start for Northern Virginia