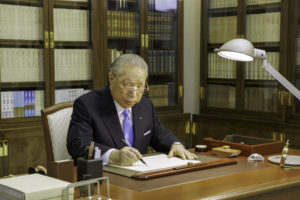 This essay appeared in the June 20, 2019, issue of the Seikyo Shimbun, the Soka Gakkai’s daily newspaper.

Let me begin by conveying my support and sympathy to all those living in the areas of Niigata and Yamagata prefectures that were struck by a powerful earthquake on June 18. Such a large tremor occurring in the middle of the night must have been very frightening. I am praying with all my heart that life will return to normal for everyone there as quickly as possible.

While in exile on Sado Island (part of present-day Niigata Prefecture), Nichiren Daishonin declared with unshakable confidence: “Misfortune will change into fortune” (“Reply to Kyo’o,” The Writings of Nichiren Daishonin, vol. 1, p. 412). Similarly, while enduring harsh persecution, first Soka Gakkai President Tsunesaburo Makiguchi, who hailed from Niigata Prefecture, repeatedly stressed to his family the power of the Mystic Law to “change poison into medicine”—to positively transform all negative circumstances.

Through our practice of Nichiren Buddhism, we can bring forth the power to overcome difficulties in the most challenging situations.

Strengthening our vow to realize the Daishonin’s ideal of “establishing the correct teaching for the peace of the land,” my wife and I are sincerely and fervently praying for the safety and security of each of our precious members.

On June 13, during a sunny interval in the rainy season, I went for a drive through central Tokyo. The green of the tree-lined streets shimmered brightly in the sunlight. When I looked up, I saw the blue sky reflected in the windows of a tall building. The blue of the skies and the green of the trees—these colors of spring and youth are the colors of hope. With this thought, I snapped a quick photo.

In one of his poems, the German poet Friedrich von Schiller (1759–1805) sings that hope spurs people to engage in life, inspires the young with its magic light and is not lost even in old age.[1]

In this same spirit, members of the Soka family continue to light a flame of hope in people’s hearts. Our youth shine with a radiant, inspiring light, while the admirable members of our Many Treasures Group continue to exert themselves tirelessly to fulfill the vow of their youth.

An inextinguishable and ever-spreading flame of hope burns brightly in our gathering of Bodhisattvas of the Earth dedicated to the great vow for kosen-rufu.

The rainy season is the time when lotus flowers bloom, and I have been receiving many photos and letters from members reporting on such beautiful blossomings.

The Bodhisattvas of the Earth who appear at the great assembly of the Lotus Sutra are said to be “like the lotus flower in the water” (The Lotus Sutra and Its Opening and Closing Sutras, p. 263)—in other words, resembling the lotus, which grows in the deepest mire or muddy water to produce the purest and most beautiful blossoms.

An inextinguishable and ever-spreading flame of hope burns brightly in our gathering of Bodhisattvas of the Earth dedicated to the great vow for kosen-rufu.

In our world filled with troubles, some of our members are having problems at work, while others are struggling with financial difficulties. Some are fighting illness, and some have lost loved ones. Some are swamped with the responsibilities of child-raising, and some are caring for sick or elderly family members.

While grappling with untold challenges and leading very busy lives, our members are nevertheless making unsparing efforts, day in and day out, to actualize kosen-rufu and the ideal of “establishing the correct teaching for the peace of the land.”

There is a passage from The Record of the Orally Transmitted Teachings that Mr. Makiguchi highlighted in his copy of Nichiren Daishonin’s writings, which was confiscated by the wartime authorities: “The Buddha of the true aspect of reality resides in the midst of the mud and mire of earthly desires. This refers to us living beings” (The Record of the Orally Transmitted Teachings, p. 91).

Going out and actively spreading Nichiren’s humanistic ideals in the muddy quagmire of society is a path of hope that leads to the fragrant flowering of the great life state of the “Buddha of the true aspect of reality” in our own lives and those of others.

Nichiren Daishonin is aware of all our efforts. The law of cause and effect is absolute. As he assures Shijo Kingo and his wife, Nichigen-nyo: “Where there is unseen virtue, there will be visible reward” (“Unseen Virtue and Visible Reward,” WND-1, 907). Just like this dedicated couple in the Daishonin’s day, our members throughout Japan and around the world today are demonstrating these words in their own lives.

In fact, whenever I read Nichiren’s letters addressed to Shijo Kingo and Nichigen-nyo, I see in my mind the faces of our noble members who are striving in their Buddhist practice with the same invincible spirit.

In one letter [“The Three Kinds of Treasure”], for instance, Nichiren writes: “Over and over I recall the moment, unforgettable even now, when
I was about to be beheaded and you [Shijo Kingo] accompanied me [on the occasion of the Tatsunokuchi Persecution], holding the reins of my horse and weeping tears of grief. Nor could I ever forget it in any lifetime to come” (WND-1, 850).

He then tells Shijo Kingo not to go around lamenting to others how hard it is to live in this world, and encourages him instead to continue striving in earnest on the path of Buddhist practice (see WND-1, 850–51). He says: “Live so that all the people of Kamakura will say in your praise that [Shijo Kingo] is diligent in the service of his lord, in the service of Buddhism, and in his concern for other people . . . [S]trive to accumulate the treasures of the heart!” (WND-1, 851).

Being ordinary people, sometimes we complain. Sometimes our emotions get out of hand, or we get carried away and make mistakes.

That is why he gives such strict and detailed guidance to Shijo Kingo, warning him not to grow careless or arrogant. His sole wish is to help his beloved disciple lead a life of victory to the very end.

In the same letter, Nichiren says that we should place importance on our “behavior as a human being” (WND-1, 852) and accumulate the “treasures of the heart” (WND-1, 851). This is a message to take pride in the shared struggle of mentor and disciple, united as one, and to demonstrate the victory of the oneness of mentor and disciple to the entire world. I can’t help but feel the profound compassion of the Daishonin who always prayed for and believed in his disciples’ ultimate victory.

During the Osaka Campaign (in 1956),[2] when our members in Kansai were expanding our movement for kosen-rufu with unstoppable momentum, I spoke to them about the tumultuous life of Napoleon Bonaparte (1769–1821).

Our unflagging efforts dedicated to spreading the Mystic Law, as we moved forward, ever forward, I said, was a beacon of hope for building peace for all humanity.

The great progress being made by a gathering of ordinary people awakened to humanity’s most noble mission roused a storm of the three obstacles and four devils to descend, just as the Daishonin predicted when he said: “If you propagate [the Mystic Law], devils will arise without fail. If they did not, there would be no way of knowing that this is the correct teaching” (“Letter to the Brothers,” WND-1, 501).

During the campaign, my mentor, second Soka Gakkai President Josei Toda, came to Kansai and spoke at the Nakanoshima Civic Hall (on May 15, 1956). He declared to the effect: “No matter how some may treat us with hostility, try to discredit us, or stir up controversy, we must always remember that we are mighty lion kings, and have no fear of the yapping of stray dogs!”

I recall his voice to this very day—his determination to defeat the devilish functions assailing us, the tremendous conviction with which he spoke truth to power, and his passionate indignation at injustice. Listening to him, our members were deeply reassured and imbued with fresh hope and courage.

This is the spirit with which great leaders must take the initiative in our movement for kosen-rufu.

Six decades ago, in June 1959, the year after Mr. Toda’s death, I traveled to Amagasaki in Hyogo Prefecture, certain that Amagasaki was the power source for our movement in Kansai.

At a Kansai general chapter leaders meeting there—as everyone continued to forge ahead tenaciously amid the unremitting attacks on our organization now bereft of Mr. Toda—I shared something that he had once said to me containing his wish and hope for the region: “Kansai is the bastion of kosen-rufu, a golden citadel.”

At all times and in every situation, I have my fellow members of Ever-Victorious Kansai, champions of an invincible and indestructible golden bastion who have fought alongside me to surmount adversity.

Our efforts to realize the great ideal of “establishing the correct teaching for the peace of the land” constitute a struggle to build a bridge for all to traverse life’s billowing waves, a bridge leading to victory and happiness for ourselves and others.

Fifty-one years ago, in 1968, I traveled to see members in Akashi, Awaji and Toyooka in Hyogo Prefecture. My wish was for each of them to experience the great joy that comes from the conviction that a life dedicated to kosen-rufu is truly wonderful and a source of immense honor and good fortune.

The key to achieving that is advancing together while “transcending all differences among ourselves to become as inseparable as fish and the water in which they swim” (see “The Heritage of the Ultimate Law of Life,” WND-1, 217). We can win through the unity of “many in body, one in mind”! That is the spirit of our Hyogo members, the spirit of Ever-Victorious Kansai, united as one.

In June 1990, I returned to my beloved Hyogo, where I made my first visit to the Soka Gakkai Kansai Memorial Park in Tamba. On the way there, I came upon a young woman from the high school division waiting by the roadside with a bouquet of wildflowers she had picked to present to my wife and me.

As an expression of our gratitude, I composed a poem and presented it to her:

The fragrance of
“lotus-grass blossoms”[3] will endure forever
along with your virtue—
Please give my best wishes to your parents
and your friends.

The “lotus-grass blossoms” reminded me of the lotus, a symbol of the principle of the “simultaneity of cause and effect,” which I drew on in this poem.

I am happy to hear that the young woman with the bouquet has developed into an outstanding leader who is energetically bringing flowers of benefit into blossom together with her family and fellow members in her local community.

The Mystic Law is the ultimate principle of hope, “enabling all living beings to attain Buddhahood in the ten thousand years of the Latter Day of the Law” (OTT, 41).

Let us forge ahead boldly with “Forward, ever forward” and “Never-ending hope” as our mottoes! Let us triumph over all and make the inspiring story of our human revolution through striving to realize the ideal of “establishing the correct teaching for the peace of the land” shine throughout the world and into the future!

What does it mean to use the strategy of the Lotus Sutra?