It was May 3, 1960, the day of my inauguration as third president of the Soka Gakkai. Everyone there was looking toward the future, aiming for the goal of worldwide kosen-rufu, their hearts filled with excitement and their eyes sparkling with hope. How indestructible was their determination to achieve that lofty goal! How noble was their mission!

In Nichiren Daishonin’s writings is the passage: “One’s body and mind at a single moment pervade the entire realm of phenomena”[1] (“The Object of Devotion for Observing the Mind,” The Writings of Nichiren Daishonin, vol. 1, p. 366). I held before my eyes a gathering transcending time and space, where valiant individuals prepared to dance forth onto the grand stage of mission of “time without beginning.”

The Soka Gakkai had been buffeted by countless storms of hatred and malice in the course of its efforts to realize kosen-rufu. All over Japan, my beloved fellow members had borne the painful brunt of unjustified criticisms and oppression. But none among these intrepid friends, dedicated to realizing the Buddha’s intent and decree, was deterred by these onslaughts. They were applauded and folded in the embrace of all Buddhas and bodhisattvas, having triumphed in all their struggles and advancing proudly to the melody of an indomitable song of human victory. 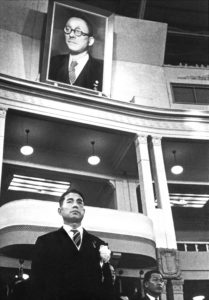 The Bodhisattvas of the Earth—champions of truth who are undaunted by the roaring cannon fire of criticism and abuse, who are filled with determination and perseverance, and who fight with absolute certainty of final triumph—possess a faith of enormous, indestructible power.

Every day, we hear the music of an exuberant victory march in which everything is a source of joy. In our morning and evening gongyo, we find the rhythm of total victory that is at one with the universe. This is because gongyo embodies a distillation of joy, wisdom, freedom and the sanctity of life.

We will never be defeated by wild attacks or the actions of degenerate, inhuman individuals. We gaze on such pitiful, arrogant people from the lofty heights of our unsurpassed citadel, brimming with pure vitality, as we talk of the future with friends, share laughter together and encourage one another. This is because we live with assurance and joy, like suns shining brightly in the infinite universe; and because, possessing the spiritual sword of truth that beams with vitality and fulfillment, we confidently make our way through life with an indefatigable fighting spirit.

My comrades, my friends! Let us, you and I, continue our song! Let us, you and I, keep moving forward! Looking down on the foul swamp of hatred and jealousy, let us shake hands with noble friends around the world, enveloped in the exhilarating, welcoming golden breezes of the heavenly deities.

The phoenix rides with the wind all day and,
stirring up whirlwinds,
Soars in an instant to ninety thousand li.[2]

May 3 is our starting point, and simultaneously, the day we make our final declaration of complete victory. It is the grand anniversary that celebrates our efforts to realize a golden age of supreme spiritual triumph and glory.

May 3 is invincible, unshaken by raging tempests. May 3 is filled with jubilation and ever-victorious hope. May 3 is the day on which our friends around the world rejoice, celebrate and deepen their determination to keep fighting for kosen-rufu.

We know that the Daishonin is watching over us, praising us and smiling at us.

We are great pioneers, whom people of the 21st century—no, of the 10,000 years and more of the Latter Day of the Law—will thank, weeping tears of gratitude. We are champions who possess lives as bright and strong as diamonds, not poor fragile lives of glass. We are walking the supreme and unparalleled path as human beings, a path that will lead us out of a society resembling a long, dark, underground prison and put our lives on a course toward a Buddha realm pervaded by eternity, happiness, true self and purity.

We know that our determination, our efforts and our living in accord with the Mystic Law are the fundamental and ultimate causes that will clearly decide the outcome of all our struggles. Buddhism teaches the “oneness of time without beginning and the Latter Day of the Law” and “the oneness of this moment and eternity.”

The purpose of our efforts here and now is to realize our noble pledge from the infinite past. The purpose of our practice and struggle each moment is to be eternally victorious in all things. Those who live contrary to these principles will lead dark, painful and sad lives; they will be defeated and end up in the state of hell.

That May 3 of 1960 was bright and sunny. The hearts of all those who had assembled that day were bright and sunny, too. Without doubt, the May 3 of time without beginning was just the same.

The Soka Gakkai, champion of truth, which alone has inherited the pure spirit of Nichiren Buddhism, has never been intimidated by the nefarious schemes and insidious persecution of the Nikken sect. We have never been defeated by that base group of slanderers, including a convicted extortionist, that continues to attack and lay dark plots against us.

The brilliant light of the SGI has spread to 156 countries [192 countries and territories as of 2019], and the shimmering mountain ranges of peace—of worldwide kosen-rufu, the goal we have dreamed of for so long—are beginning to come into view.

We have fought! We have won! May 3 is the celebration of the triumph of the forces of the Buddha called Soka.

We have beaten
the base-hearted Devadatta,[3]
demonstrating the power of Soka,
champion of justice. 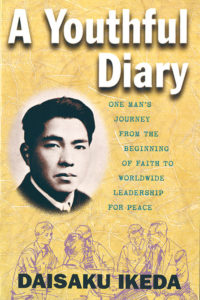 On the day he succeeded his mentor, second Soka Gakkai President Josei Toda, who had died two years earlier, Daisaku Ikeda penned in his diary:

Inaugurated third president of the Soka Gakkai . . . Pictured my mentor rejoicing. Solemn, serious. Shall begin my lifetime battle to spread the Law, transcending life and death. My fellow [Soka] Gakkai members, my friends, were truly happy for me. Must take leadership for kosen-rufu in a way that befits a general, a human being and a youth.[4]

A month before, the young Daisaku made his goals for May:

Together, We Strive Toward Victory