This installment, published in the November 21, 2018, issue of the Seikyo Shimbun, focuses on passages from Nichiren Daishonin’s writings that Ikeda Sensei discusses in volume 2 of The New Human Revolution.

“Let the gods forsake me. Let all persecutions assail me. Still I will give my life for the sake of the Law.” (“The Opening of the Eyes,” The Writings of Nichiren Daishonin, vol. 1, p. 280) 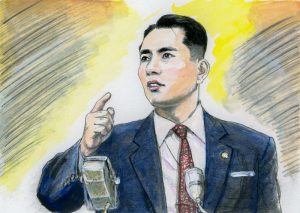 The Future of the World Rests on the Shoulders of Youth

With his inauguration as third Soka Gakkai president on May 3, 1960, Shin’ichi Yamamoto launched a new battle to accomplish his mentor’s will and testament—a membership of 3 million households. At a young men’s leader’s meeting that took place on May 10, he makes the following declaration.

Engraving this passage in my heart, I am determined to dedicate my life to the cause of world peace—to worldwide kosen-rufu—striving together with all of you while sharing your sufferings and problems right to the very end.

He spoke frankly about the path that Soka youth should strive to follow: “To build a new society, it is important that each of you develop as a person of first-class caliber in your particular field—be it science, economics, education, politics or whatever. Also, instead of being wrapped up solely in the narrow concerns and interests of Japan, you should strike out into the world and contribute to the peace and happiness of all humanity. This is your mission.”

He concluded his address: “I have profound faith in you. Should I fall in the course of my struggle, I ask that you carry on my aspirations and continue to advance strongly toward the goal of kosen-rufu.” (The New Human Revolution, vol. 2, revised edition, pp. 24–26)

“Whether you chant the Buddha’s name, recite the sutra, or merely offer flowers and incense, all your virtuous acts will implant benefits and roots of goodness in your life. With this conviction you should strive in faith.” (“On Attaining Buddhahood in This Lifetime,” WND-1, 4) 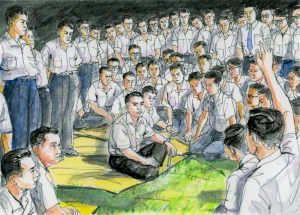 The Spirit to Cheerfully Challenge Is the Source of Benefit

In July 1960, an outdoor training camp for the Suiko-kai, a young men’s training group, was held at Inubosaki in Chiba Prefecture. During a questionand- answer session, a young man asked how to apply the following passage to his life. The following is Shin’ichi’s response.

“This passage describes the attitude with which we should devote ourselves to the Gohonzon and the unwavering dedication we should have toward all our activities for kosen-rufu. Above all, it is important to have confidence that everything that contributes to kosen-rufu leads to great benefit and fortune. Those with this belief feel joy and gratitude; they are unlikely to complain or be dissatisfied.

“I have been practicing faith with this conviction. I have always cheerfully challenged even the bitterest and most difficult obstacles. To support President Toda, I went anywhere necessary for kosen-rufu, juggling my job commitments as best as I could. And if I couldn’t scrape together enough money to pay the fare to get there, I was still determined to go even if I had to walk. I believe this is the source of the benefit and good fortune I enjoy today.

“Suppose you are put in the position where, for kosen-rufu, you have to spend the rest of your life in a distant country known for sweltering heat or freezing cold. It comes down to whether you can leave for such a place with a positive and joyful attitude. Without such a spirit and practice, we cannot hope to achieve the great and unprecedented endeavor of kosen-rufu. The path to accumulating great benefit and good fortune throughout the three existences of life lies in such steadfast faith.” (NHR-2, revised edition, 111–12)

Rise and Greet Them From Afar, Showing Them the Same Respect You Would a Buddha

The “Training” chapter of The New Human Revolution, volume 2, cites the passage from the Lotus Sutra, which states, “If you see a person who accepts and upholds this sutra, you should rise and greet him from afar, showing him the same respect you would a Buddha” (The Lotus Sutra and Its Opening and Closing Sutras, p. 365).

Nichiren Daishonin states that this “the foremost point he [the Buddha] wished to convey to us” (The Record of the Orally Transmitted Teachings, p. 192).

The spirit of this phrase, which in Chinese is composed of eight characters, teaches that those who dedicate their lives to kosen-rufu deserve to be given the same respect as the Buddha and cherished as highly as the Buddha.

In studying The New Human Revolution, we learn that Shin’ichi Yamamoto’s behavior reflects the spirit of this passage. Throughout volume 2 of the novel, various scenes depict such behavior. The “Vanguard” chapter describes his first visit to Okinawa. In celebrating the establishment of Okinawa Chapter, Shin’ichi decides to perform the traditional dance “Song of Kuroda” to pay tribute to the members for their unflagging efforts. After his first dance, a member requests, “Sensei, please dance some more.”

He replies, “If it makes you happy, I’d be more than pleased to” (NHR-2, revised edition, 65). And he begins to dance again.

In the chapter “The Banner of the People,” there is a scene where he encourages youth who had worked from early in the morning, many working outside, to support the Oita Chapter inaugural meeting. Filled with appreciation, Shin’ichi encouraged these youth to aim toward the next 10 years to develop themselves and advance kosen-rufu, offering them a vision for the future.

Shin’ichi continued to pray for the happiness of his fellow members, cherishing them as he would the Buddha, offering sincere and wholehearted encouragement in various ways. His behavior and actions reflect the Soka Gakkai spirit that we, as disciples, should strive to inherit and carry on in our own lives.