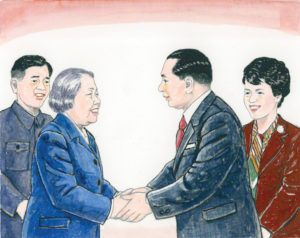 On September 11, 1978, Shin’ichi Yamamoto departed on his fourth trip to China. The Treaty of Peace and Friendship between Japan and the People’s Republic of China had recently been signed in August. On this trip and in this new era of Sino-Japanese relations, he sought to broaden the ties between the two nations and create the foundation for ever-lasting peace.

The day after their arrival, Shin’ichi visited Yangpu District Children’s Palace in Shanghai. On September 13, he went to Fudan University for a book donation ceremony. There, he enjoyed discussions with the university’s president, Su Buching, and several students. The next day, he visited Suzhou’s scenic Tiger Hill. And, on September 16, he visited the Yuhuatai Mausoleum of Revolutionary Martyrs and placed a wreath at the monument.

On the evening of September 17, a welcome banquet was held in honor of Shin’ichi’s delegation at the Great Hall of the People. There, he stated that loyalty is essential in protecting the spirit of peace instilled in the peace and friendship treaty between the two countries. Shin’ichi met Deng Yingchao, the widow of the late Premier Zhou Enlai, for the first time at the dinner. Madame Deng expressed to Shin’ichi her wish to make her first visit to Japan.

On September 19, he met Vice Chairman of the Chinese Communist Party Li Xiannian. Later that evening, Shin’ichi hosted a thank-you banquet that was attended by Madame Deng. Both she and her husband, Premier Zhou, had been wholly dedicated to the revolutionary spirit throughout their lives and were ever mindful of the importance of reforming one’s heart and mind.

Expressing his eagerness to welcome Madame Deng to Japan in the near future, Shin’ichi also pledged strongly in his heart to honor the relationship of trust he had created with Premier Zhou and to build a golden bridge of friendship between Japan and China. 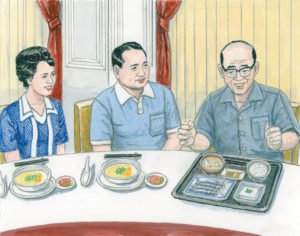 The Essence of Friendship

In September 1978, at the invitation of the China-Japan Friendship Association, Shin’ichi traveled with a Soka Gakkai delegation to China. During this fourth visit to the country, and against the backdrop of a peace and friendship treaty having recently been signed between the two countries on August 12, he made every effort to create an unending flow of bilateral friendship.

On the second day of their visit to China, the members of the Soka Gakkai delegation had breakfast with China-Japan Friendship Association Secretary-General Sun Pinghua at the Jin Jiang Hotel where they were staying.

Shin’ichi and his wife, Mineko, sat at a round table with Sun. Several dishes had been placed in front of where he was to be seated. When Sun sat down, he exclaimed in surprise: “Oh! Grilled dried sardines, hiyayakko tofu and miso soup!”

Smiling brightly, Mineko said, “When we last visited China, you shared fond memories of enjoying dried sardines and tofu during your time studying in Japan.”

Shin’ichi continued: “You have been so kind and accommodating to us since our very first visit to China, and we were discussing how we could express our appreciation. We remembered you mentioning that you had enjoyed Japanese cuisine during your time as an overseas student, so we decided to bring these dishes from Japan. My wife prepared them for you.” …

Shin’ichi and Mineko had earnestly discussed the logistics, wondering whether they could bring the food and how to keep the tofu from falling apart.

“Please dig in before it gets cold.” Prompted by Mineko, Sun raised his chopsticks and, with a beaming smile, took a bite of the sardines.

“I remember this flavor well! It’s delicious! I can truly feel your sincerity.”

“Oh, we’re delighted to see you enjoying it,” Shin’ichi said, grinning widely. It may have been a small gesture on their part, but it came from the heart. Heartfelt interactions are the essence of friendship.

With the passage of time, lifestyles and other circumstances change significantly. We have no choice but to live with this perpetual change. That is why cultivating our ability to deal with change, instead of clinging stubbornly to our own perspective and past experiences, is indispensable for leading a better life.