There is a baton I wish to pass to you, my young successors of the future division, the “torchbearers of justice.” It is the baton of peace and human rights that has been handed from mentor to disciple in the month of July. 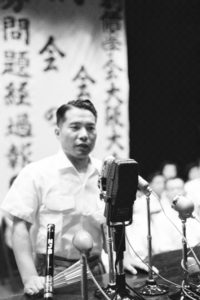 Daisaku Ikeda leads the Osaka Rally at the Nakanoshima Civic Hall following his release from the Osaka Detention Center, July 17, 1957. He had been detained two weeks earlier on false charges of violating election laws. He was fully exonerated on Jan. 25, 1962. Photo by Seikyo Press

At 7p.m. on July 3, 1945, my mentor, second Soka Gakkai President Josei Toda, was released from prison, having been arrested two years earlier with his own mentor, founding President Tsunesaburo Makiguchi, by Japan’s wartime militarist authorities. Inheriting the spirit of Mr. Makiguchi, who ultimately died in prison for his beliefs, Mr. Toda stood up alone to launch a grassroots movement of human revolution.

In Osaka, on the same date and around the same time of day 12 years later (in 1957), I, too, was arrested on false charges [in what came to be known as the Osaka Incident].[1] It was an attempt by the devilish nature of authority to obstruct the advance of the Soka Gakkai, which had been making great strides toward realizing Nichiren Daishonin’s ideal of “establishing the correct teaching for the peace of the land.”

When I was released after two weeks of intense questioning, on July 17, Mr. Toda and many of my fellow members welcomed me at the large civic hall in Nakanoshima. This red-brick building was the venue for that evening’s Osaka Rally, where we gathered to speak out for truth and justice. 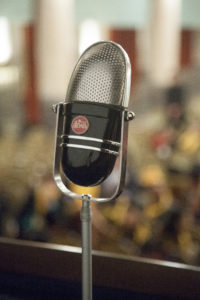 A replica of the microphone Daisaku Ikeda used at the Osaka Rally on July 17, 1957, at the Nakanoshima Civic Hall, Osaka, Japan. Photo by Yvonne Ng

A banner at the front of the room proclaimed these words from the Daishonin’s “Letter to the Brothers,” which I shared with you in the previous installment: “If you propagate [this teaching], devils will arise without fail. If they did not, there would be no way of knowing that this is the correct teaching” (The Writings of Nichiren Daishonin, vol. 1, p. 501).

Buddhism is about winning. The proud history of the Soka Gakkai has been one of boldly overcoming every storm of adversity and paving the way for the peace and happiness of all people.

The Ikegami brothers, Munenaka and Munenaga, faced strong opposition for their Buddhist practice from their father, Yasumitsu, who twice disinherited the elder, Munenaka. But the brothers, along with their wives, solidly united together and overcame all obstacles, eventually leading their father to embrace the Daishonin’s teachings.

It was in the midst of these challenges that they received the writing “Letter to the Brothers” from Nichiren, urging them never to be defeated.

Devilish functions are certain to arise when we progress on the path of faith. They seek to divide people, as in the case of the Ikegami brothers, by trying to sow disunity between them.

Mr. Makiguchi warned that corrupt, unscrupulous people tend to band together, possessing an insidious capacity to grow ever stronger, and if good, honest people stay isolated and disconnected, society will become a dark and perilous place. That is why, he insisted, those who stand on the side of good must unite.[2]

The unity of the good and just will vanquish evil and injustice.

Wishing for the Ikegami brothers and their wives to remain firmly united, the Daishonin continued to offer them words of encouragement and guidance. For instance, he shared the admonition “Become the master of your mind rather than let your mind master you”[3] (WND-1, 502).

To allow our mind to master us is to let our weak and ever-moving mind rule and sway us. In contrast, to master our mind is to prevail over our inner weakness by making the correct teaching of the Mystic Law our foundation.

Nichiren Buddhism and our mentors in faith show us the way to become the master of our mind and to triumph in life. Members of the Soka Gakkai are forging ahead on this noble path, encouraging one another.

Instead of worrying and suffering alone, when you encounter obstacles, sit in front of the Gohonzon and resolutely chant Nam-myoho-renge-kyo. Start your efforts from earnest prayer. From there, reach out to your fellow members and, while supporting one another, strive to overcome your problems with courage, wisdom and optimism.

Nichiren also writes, “Whatever trouble occurs, regard it as no more than a dream, and think only of the Lotus Sutra [Nam-myoho-renge-kyo]” (WND-1, 502). In other words, no matter what happens, think of it as just a dream, and continue your efforts for kosen-rufu, upholding the Mystic Law.

A mighty tree with solid roots will not be toppled, even in the face of the fiercest storm. Similarly, those who put down strong, deep roots of faith will be fine, even if they grow anxious or lose confidence at times. Young people who chant Nam-myoho-renge-kyo throughout all will always find a way forward. Winning is important, but even more so is not being defeated by your inner weakness. The best way to polish your character and tap your potential is to meet any defeat with the renewed determination to succeed the next time.

The American Civil Rights leader Martin Luther King, Jr. (1929– 68) dedicated his life to fighting the evil of division and realizing his dream of building a solidarity of good committed to promoting peace and harmony. Dr. King was strongly influenced by his mentor Benjamin E. Mays, who was the president of his alma mater, Morehouse College.

Dr. Lawrence E. Carter, dean of Morehouse College’s Martin Luther King Jr. International Chapel, inherited the spirit of these two great men, mentor and disciple, and has spread their message around the world. He is also a member of Soka University of America’s Board of Trustees.

Dr. Carter once shared these lines of a poem with Soka junior and senior high school students in Japan:

If you think you are beaten, you are;
If you think you dare not, you don’t;
If you’d like to win, but think you can’t, It’s almost a cinch, you won’t.
If you think you’ll lose, you’re lost,
For out in the world we find
Success begins with a fellow’s will;
It’s all in the state of mind.[4]

You, my dear members of the future division, who have embraced the Mystic Law at a young age, have Nam-myoho-renge-kyo, a jeweled sword that assures you of absolute victory.

Nichiren praised the Ikegami brothers for their solidarity and steadfast faith, saying, “Could there ever be a more wonderful story than your own [that will be recounted by future generations]?” (see WND-1, 499).

Whatever happens, you must never abandon the Gohonzon or stray from the Soka Gakkai. I hope you’ll stay connected to the Soka family by attending discussion meetings and future division gatherings and in other ways.

Thinking of your wonderful fellow members around the world as you chant Nam-myoho-renge-kyo infused with a vow to achieve ultimate victory, courageously tackle the tasks in front of you, one by one.

Your steady, tenacious efforts to keep forging ahead in your youth as “torchbearers of justice” will light the way forward for yourself and others and also serve as an inspiration for future generations.

This is from Ikeda Sensei’s series addressing members of the junior high and high school divisions. This installment originally appeared in the July 1, 2019, issue of the Mirai [Future] Journal, the Soka Gakkai’s monthly newspaper for the group. Part one appears in the Dec. 4, 2020, World Tribune, p. 2.

Embodying Unity in Diversity Based on the ‘Great Wisdom of Equality’

Toward A New Renaissance of Life