“While systems depending on hard power have succeeded by using established tools of coercion to move people toward certain goals, the success of soft power is based on volition. It is an internally generated energy of will created through consensus and understanding among people. The processes of soft power unleash the inner energies of the individual.”[1] 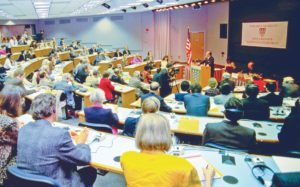 Thirty years ago this month, Ikeda Sensei delivered his first of two lectures at Harvard University, titled “The Age of ‘Soft Power’.”

In his September 26, 1991, address at the Harvard Kennedy School of Government, Sensei spoke of how the “hard power” of military, economic and political might has too often been the driving force for history. He then noted how the times were giving way to “soft power,” predicated upon knowledge and information, culture, ideas and systems, and rooted in self-motivation. The burden of sustaining and accelerating this trend, he said, lies with philosophy.

To illustrate this idea, he cited Alexis de Tocqueville’s observations of a self-motivated Christianity in 19th-century America and the development of the Bushido spirit during Japan’s Edo Period. He writes: “Our society today urgently needs the kind of inwardly directly spirituality to strengthen self-control and restraint. It is a quality that deepens our respect for the dignity of life.”[2]

To date, Sensei has delivered more than 30 university addresses touching on a wide range of topics, including diplomacy, philosophy, history, art and so forth. He delivered his second lecture at Harvard University on September 24, 1993.

Can Buddhism help me with “coronasomnia”?