The following is Ikeda Sensei’s study essay from “The Writings of Nichiren Daishonin and the Mentor-Disciple Relationship” series. This installment (part one of two) was originally published in the Dec. 25, 2008, Seikyo Shimbun, the Soka Gakkai’s daily newspaper, as well as the May 8, 2009, World Tribune.

“If in a single moment of life we [exert millions of kalpas[1] of effort], then instant after instant there will arise in us the three Buddha bodies with which we are eternally endowed. [Chanting] Nam-myoho-renge-kyo is just such a ‘diligent’ practice.” (The Record of the Orally Transmitted Teachings, p. 214)

“Daisaku, I want you to engrave this passage in your heart. Soka Gakkai members should never forget these words,” my mentor, second Soka Gakkai President Josei Toda, said to me emphatically a short time after I began practicing Nichiren Buddhism. He was referring to the above passage from The Record of the Orally Transmitted Teachings, which we will be studying this time.

In the “Emerging from the Earth” chapter of the Lotus Sutra, we find the lines “Day and night with constant diligence / they … seek the Buddha way” (The Lotus Sutra and Its Opening and Closing Sutras, p. 260). This describes how the infinite numbers of Bodhisattvas of the Earth have been instructed by Shakyamuni and practiced the Buddha wisdom since the infinite past. Day and night, for so long, they have single-mindedly pursued the path set forth by the Buddha, thereby attaining a great and lofty state of life. It is in reference to this Lotus Sutra passage that Nichiren Daishonin makes the aforementioned statement. He is urging us, practitioners of the Mystic Law in the Latter Day, to exert countless kalpas’ worth of concentrated effort in each moment of our lives. This, he says, is the practice of chanting Nam-myoho-renge-kyo.

Until then, it was widely believed that Buddhist practice had to be carried out for the inconceivably long period of countless kalpas. But Nichiren tells us that this isn’t the case; by chanting Nam-myoho-renge-kyo, we can instantly cause the “three Buddha bodies with which we are eternally endowed”—the life state of the Buddha, just as it is, that resides within all of us—to emerge from the depths of our lives. In other words, the act of chanting Nam-myoho-renge-kyo is the very practice that condenses eternity into a single moment of life.

The Great Life State of Buddhahood Resides Within Us

The “three Buddha bodies” refers to three aspects of the Buddha’s life—the Dharma body or body of the Law (the ultimate truth), the reward body (wisdom) and the manifested body (compassion). The great and all-encompassing life state that comprises these three aspects wells forth from within when we chant Nam-myoho-renge-kyo. How wonderful is the benefit conferred by the Mystic Law, how profound the Mystic Law and how meaningful our Buddhist practice. We ordinary people possess within us the supremely noble life state of Buddhahood—this is the essence of Buddhist humanism.

When we look at the history of many religions around the world, we find numerous tragic instances in which power-hungry professional clerics and religious authorities have relegated the people to a lesser status, oppressing them. The Record of the Orally Transmitted Teachings can be seen as representing a direct challenge to and a resounding declaration of victory over such discriminatory and repressive tendencies in religion.

Since my youth, it has been my firm resolve to “exert millions of kalpas of effort” in all of my struggles as Mr. Toda’s disciple. In order to support and assist my mentor, a great leader of kosen-rufu, and to realize each of his dreams and goals, I vowed to give my utmost in every instant of my life.

This ‘Single Moment of Life’ Is Critical

I served and supported Mr. Toda for 10 years, but the things he and I achieved as mentor and disciple in that time were equivalent to what might take some a century or even a millennium to achieve.

“[Chanting] Nam-myoho-renge-kyo is just such a ‘diligent’ practice.” This is a very profound statement. “Diligent” (or shojin in Japanese) here is composed of two Chinese characters. The Chinese character for sho means “pure” and refers to pure faith, while the character for jin means “ceaseless” and refers to uninterrupted advance. To diligently carry out this practice of pure faith and ceaseless advancement is the direct path by which we can attain enlightenment or Buddhahood. For us, to continually move forward while making efforts for the sake of kosen-rufu is what it means to “exert millions of kalpas of effort.” 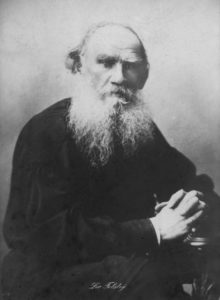 The great Russian author Leo Tolstoy said to the effect that it is wise to live in the moment, to do our very best right now. Photos.com / Getty Images

Our determination in the present moment is the key to victory. The great Russian author Leo Tolstoy said to the effect that it is wise to live in the moment, to do our very best right now. In other words, our focused resolve now can open the way to a brighter future. Though our resolve is intangible, it is manifested as action. Nichiren writes that when confronted by obstacles, “the wise will rejoice while the foolish will retreat” (“The Three Obstacles and Four Devils,” The Writings of Nichiren Daishonin, vol. 1, p. 637). Faith means having the resolve to take on all of life’s challenges with courage and joy. And chanting Nam-myoho-renge-kyo is the driving force that enables us to continue pressing ahead bravely.

Everyone experiences sufferings and problems. Sometimes we may face such things as financial difficulties or sickness. But those who chant Nam-myoho-renge-kyo and strive tirelessly for kosen-rufu are able to attain Buddhahood. They can tap the wisdom and strength of that supreme inner life state and thereby overcome any obstacle. Through the course of this challenge, they can deepen their lives and become as strong as pure gold.

Worries That Arise From Our Efforts for Kosen-Rufu Are Noble

Mr. Toda often said: “People worry about not having enough money. They worry about their health. There is always something to worry about in one area of life or another. Nevertheless, in addition to our own worries, we of the Soka Gakkai worry about how to spread Nichiren Buddhism and help others become happy. Worries that arise out of our efforts for the sake of the Law, the sake of others and the sake of kosen-rufu, based on faith in the correct teaching of Buddhism—these are the noblest worries of all.”

Buddhahood is manifested at every moment in the lives of those who take action based on the great vow of the oneness of mentor and disciple. SGI activities, in which we exert ourselves wholeheartedly “day by day and month after month” (“On Persecutions Befalling the Sage,” WND-1, 997), are the modern-day equivalent of “diligent practice.” As members of the SGI, all of you are noble and actively engaged Bodhisattvas of the Earth in whom the expansive life state that is eternally endowed with the “three Buddha bodies” pulses vigorously “instant after instant.”

Let’s boldly take another step forward again today, with the proud conviction that we are the great champions of “diligent practice” in the 21st century.

The Record of the Orally Transmitted Teachings is a compilation of lectures that Nichiren gave on important select passages of the Lotus Sutra. Containing the essence of his teachings, it was transcribed by Nikko Shonin and was said to have been approved by Nichiren. The Daishonin lectured on the Lotus Sutra for several years after taking up residence on Mount Minobu. Having triumphed over several momentous persecutions and attained an indomitable, victorious state of life, he dedicated himself during this final period of his life to training successors for the sake of posterity.

Ikeda Sensei composed the following poems to commemorate Aug. 24, the 73rd anniversary of the start of his Buddhist practice, and the 70th anniversary of the day he and his mentor, second Soka Gakkai President Josei Toda, first discussed plans for establishing the Seikyo Shimbun, the Soka Gakkai’s newspaper. These poems originally appeared in the Aug. 24, 2020, issue of the Seikyo Shimbun.

As my successors,
who have chosen to appear
at this significant time,
dispel the darkness
with the flame of your youthful vow!
• • •
Imparting the wonderfully effective medicine
of the Mystic Law
to all humanity,
the mentors and disciples of Soka
are great physicians of life.
• • •
May the Seikyo Shimbun
forever connect people across the globe
with the Buddhist wisdom for peace,
demonstrating that the assembly
of Eagle Peak continues here and now. 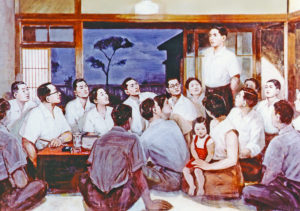 Remaining True to Our Goals