The following is an excerpt of Soka Gakkai President Minoru Harada’s speech on Aug. 31 during the 42nd Soka Gakkai Headquarters Leaders Meeting of the New Era of Worldwide Kosen-rufu, held in Yokohama, Japan. The text appeared in the Sept. 6 issue of the Seikyo Shimbun, the Soka Gakkai’s daily newspaper. 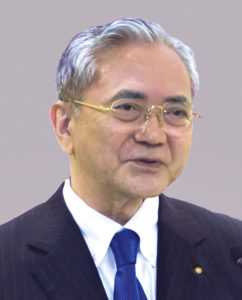 Congratulations on holding this 42nd Headquarters Leaders Meeting of the New Era of Worldwide Kosen-rufu and the Nationwide Men’s Division Leaders Meeting!

Joining us today are 270 youth leaders from 65 countries and territories who have gathered here for the SGI Youth Training Course. Thank you all for traveling great distances. I welcome you with all my heart!

Looking back, the first time the Soka Gakkai set an annual theme for its advance was 60 years ago in 1959, with the theme the Year of Dawn.

Five years later, when Soka Gakkai President Daisaku Ikeda began writing the “Dawn” chapter in volume 1 of The Human Revolution, he took part in a summer training course in August. There, a high school division member asked him, “How will you conclude The Human Revolution?”

The conclusion of The Human Revolution, which starts with the chapter “Dawn,” will ultimately return to the theme of a new dawn. The novel starts with a new dawn and will end with a new dawn. Second Soka Gakkai President Josei Toda ushered in the dawn of the Soka Gakkai before the end of World War II . . . After Mr. Toda, there is a new dawn with me in the lead, and then after me, you, the high school division members, will create another new dawn. (June 2019 Living Buddhism, p. 42)

Now that The New Human Revolution has concluded, I truly believe that we—
the disciples who will succeed Sensei—have risen in unity to this challenge, and in doing so, have boldly ushered in the dawn of a new age.

Moreover, it was 60 years ago in that Year of Dawn that President Ikeda assumed full responsibility for kosen-rufu in his mentor’s stead, courageously endeavoring with all his might to bring forth the sun of hope in the hearts of the members.

In June 1976—around the same time that Aug. 24 was designated “Men’s Division Day” to honor the day President Ikeda started his Buddhist practice—he decided to compose the “Song of Human Revolution.” Later that same year, when the first Men’s Division Day meetings were held, Sensei sent a message to these meetings from Kagoshima Prefecture. The message read:

To my beloved fellow members of the men’s division: I ask you to you join me in proudly singing the “Song of Human Revolution” as you strive to attain Buddhahood in this lifetime and add magnificent finishing touches to your lives.

Just as he expressed in that message, let us thoroughly embrace Sensei’s vision as we continue advancing in this second half of the year and approach our victorious 90th anniversary next year. And as his disciples, let’s strive to carry out our human revolution so that the sun of hope rises in our own districts and groups.

Next year, 2020, marks the 60th anniversary of President Ikeda’s inauguration as the third Soka Gakkai president and the 90th anniversary of the Soka Gakkai’s founding. To honor these two milestones, we, as Sensei’s disciples, will launch a major initiative to introduce people everywhere to Nichiren Buddhism.

The first step in this effort will be to expand the readership of the Seikyo Shimbun, the Soka Gakkai’s daily newspaper, aiming toward this Nov. 18, which will mark the completion of the new Soka Gakkai World Seikyo Center.

Propagation and growing the paper’s readership are like the two wheels of a cart. By increasing readership of our publications, we will definitely find new ways to advance kosen-rufu.

Regarding the Seikyo Shimbun, President Toda clearly stated: “It is a powerful weapon in our struggle to propagate Nichiren Buddhism. It’s not at all about the business of selling newspapers.” After saying this, he shared the following two stories.

The first concerned a woman who lived in a remote area where no one could visit her for the first two years of her Buddhist practice. Despite this, she established a correct practice and her faith only grew stronger, because she always read the Seikyo Shimbun and other Soka Gakkai publications.

The second story was about a member who sent the newspaper to all his friends who lived in various places. Hoping they would read the paper and develop an understanding of Buddhism, two or three months later he would visit them to help them begin their own Buddhist practice.

After providing such examples, President Toda explained: “This is utilizing the Seikyo Shimbun at its best. It is and always will be a great tool for sharing Buddhism.”

Propagation and growing the paper’s readership are like the two wheels of a cart. By increasing readership of our publications, we will definitely find new ways to advance kosen-rufu.

President Ikeda says, “With our genuine concern for people’s happiness, let’s further strengthen, deepen and expand the bonds that they have with Buddhism!”

To celebrate the completion of the new World Seikyo Center, let us put this guidance into practice and achieve new personal records in expanding the readership of our newspaper.

Making today a fresh start toward Nov. 18, let’s use these next two months to resolutely advance! WT