On September 23, 2018, the SGI-USA youth introduced their “Lions of Justice Youth Vow,” creating a set of five benchmarks to define a new era of hope and respect for all in the U.S. The first vow—to “View the people of the world, beyond all borders, including refugees, as family, equally worthy of respect”—is no easy task.

SGI President Ikeda, however, has demonstrated through his tireless efforts to engage others in dialogue, that it is possible to bring together people and nations once divided. He has shown that the starting point of peace is to build bridges of trust and friendship.

Below are excerpts from SGI President Ikeda and leading figures of the American Civil Rights movement with whom he has engaged in dialogue. These excerpts touch on key topics that are vital in developing a culture of peace and human rights.

Being a disciple is not the same as joining a club. It is not as simple as declaring allegiance or choosing a side. It is a purposeful decision to try to
understand the greater vision held by a mentor and to try to actualize that vision in our own life. The decision to be a disciple is fundamentally a choice about the values, virtues and vision of victory we have for ourselves and the world, and how to avoid vices. (A Baptist Preacher’s
Buddhist Teacher, p. 58)

As King said, we live in a single world house, but as long as we insist on viewing one another through the distancing lens of the nation-state, we cannot face global problems together, nor can we recognize our common humanity, our common good. We must attempt to transcend our differences and to speak to one another as brothers and sisters. (Ibid., p. 87) 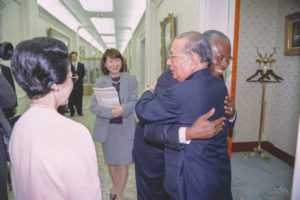 Vincent Harding: One of [Martin Luther King Jr.’s] major goals was not simply to establish legal rights for black people but to go beyond that to create what he termed the “beloved community,” in which all people could rediscover a sense of our fundamental connectedness as human beings. What King and other spiritually grounded leaders in the movement were trying to teach was that our ultimate goal was to create a new America—an America where blacks and whites, as well as people of all colors, could come together to find common ground for the common good. (America Will Be!, p. 54)

Daisaku Ikeda: An aware citizen pays special attention to the relationship between oneself and others, as well as that between oneself and the natural environment, and lives as a responsible participant in society. To be a global citizen means to have an enlightened, humanistic consciousness, a global perspective, and to live as a responsible member of the global community. (Ibid., p. 8)

Harding: When we think of building a global community, we must consider what exactly the concept of community means. An essential aspect of this is to thoroughly know ourselves. Without this understanding of the self, there is a temptation to imitate, become totally dependent on or completely reject the other. Consequently, creating a community becomes impossible.

To build a global community, we must earnestly seek answers to the questions of who we are and where we have come from . . . and recognize that at a fundamental level, we are indeed connected to every other being. (Ibid., p. 220)

Harding: In order to create the “beloved community,” we must build a society that not only protects each person’s civil rights but also enables people to relate to one another with love and compassion.

Ikeda: The idea that our security should not be based on the insecurity of others must be the foundation on which we build a society of peaceful coexistence. (Ibid., p. 164)

The Power of a Single Individual to Transform the World

Rosa Parks, known as the mother of the American Civil Rights Movement, demonstrated that when an individual stands up for the dignity of life at all costs, the flow of justice cannot be stopped. In President Ikeda’s book, Unforgettable Friends, he describes her indomitable spirit.

There are times when a single word changes history, and when an ordinary day can become eternally remembered. There are also times in which a solitary individual becomes a leader who transforms the world.

When Rosa Parks refused to obey the order of the bus driver to give her seat to a white passenger and said the single word “No,” the bell of change tolled triumphantly for the history of African Americans in the United States. (Unforgettable Friends, p. 14)

An idea whose time has come is powerful indeed. The courage of one woman changed the world as dramatically as a single spark setting ablaze a parched field.

She was anchored to that seat by the accumulated indignities of days gone by and the boundless aspirations of generations yet unborn. She was a victim of both the forces of history and the forces of destiny. She had been tracked down by the Zeitgeist—the spirit of the time.

The time had grown ripe for change, and with her stirring refusal to accept oppression, Mrs. Parks reaped the first fruit of that ripening. (Ibid., p. 16)

President Ikeda shares his thoughts on Dr. King’s eulogy at the funeral of the four girls who were killed in the 16th Street Baptist Church bombing in Birmingham, Alabama.

In his eulogy for the children, Dr. King directly addressed the sorrow of the family and friends: “In spite of the darkness of this hour, we must not despair. We must not become bitter, nor must we harbor the desire to retaliate with violence.” Dr. King expressed hope that the “death of these children may lead our whole Southland from the low road of man’s inhumanity to man to the high road of peace and brotherhood.”

To discover rays of hope, even in the darkest despair—this surely demonstrates the tenacious, indomitable conviction that enabled Dr. King to dedicate his entire life to his noble cause. His philosophy of hope was unshakable, as solid as rock.” (America Will Be!, p. 142)

Discussion Meetings Are the Key to Creating a Global Family

I understand from Mr. Ikeda that the discussion meeting has always been the heart and soul of the SGI organization, that this is the “home” for all SGI members, the place where almost every member (including Ikeda himself) first encountered Nichiren Buddhism. It has grown to an astonishing membership in large part because of these home gatherings.

I have come to appreciate that the SGI gatherings are full of both new introductions and constant affirmations. Their discussions are feasts of affirmative words, ideas and possibilities. It seems to me that Ikeda has inspired a great discussion that is alive throughout the organization he worked so hard to build. I have seen these discussions take place in small gatherings in Atlanta, in Los Angeles, in Australia, in Africa, in New Zealand, in Singapore and in many other places around the world; always they are lively and filled with inspiring ideas. The SGI is an organizational spiritual affirmatorium seeking to achieve everybody’s enlightenment and happiness. (A Baptist Preacher’s Buddhist Teacher, pp. 133–34)

Treasuring Each Individual Is Necessary to Create a Peaceful Society

Dean Carter tells the story of his elementary school teacher who taught him to read in an integrated school where he often experienced discrimination from classmates and teachers.

She did not make a big deal out of it, or act like she was doing me any special favor. She simply told me that I would have to work extra hard to improve my reading skills, and that she would help me do it. I was stunned, in fact amazed . . .

So that day I stayed after school and did so for many afternoons over the following weeks. That remarkable woman taught me how to read properly. I now understand that she took time away from her lesson planning and grading, and even from her personal affairs, in order to help me. But she never made me feel like I was a backward little boy who needed help. I was a student, and she was my teacher. (Ibid., pp. 151–52)

Encouragement is what gives people understanding and hope to generate the strength to move forward with vigor and positivity . . .

Nichiren, whose teachings we in the Soka Gakkai International follow, wrote, “Teaching another something is the same as oiling the wheels of a cart so that they turn even though it is heavy, or as floating a boat on water so that it moves ahead easily.” Encouragement is indeed the special ingredient that enables a person to move ahead with confidence and peace of mind. Our Soka Gakkai International movement, based on the Buddhist philosophy of life, offers infinite encouragement to light the flame of exceptional courage in people’s hearts. (America Will Be!, p. 65)