Vivek H. Murthy, who served as the U.S. surgeon general from 2014 to 2017, added emotional well-being and loneliness to his list of big public health worries. 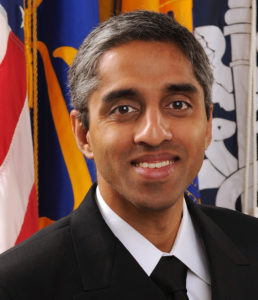 In a Harvard Business Review article, Murthy writes that “we live in the most technologically connected age in the history of civilization, yet rates of loneliness have doubled since the 1980s.”

The workplace, he says, is one of the primary places where it can get better—or worse. “Our social connections are in fact largely influenced by the institutions and settings where we spend the majority of our time,” Murthy said in an interview with The Washington Post.

Q: What inspired you to take this on as an issue?

A: When I began my tenure as surgeon general I did not think that I would be talking about loneliness and emotional well-being. But when I was traveling to communities across the country I found that loneliness was a profound issue that was affecting people of all ages and socioeconomic backgrounds.

As somebody who trained as a doctor, I also found that in medicine we get very little guidance on how to approach emotional well-being. We don’t often screen patients for loneliness. And many clinicians aren’t clear about the strong connection between loneliness and the very health problems we are trying to address, often with medications and procedures.

When you look at the data, what’s really interesting is loneliness has been found to be associated with a reduction of life span similar to that caused by smoking 15 cigarettes a day. Look even deeper, and you’ll find loneliness is associated with a greater risk of heart disease, depression, anxiety and dementia. And if you look at the workplace, you’ll also find it’s associated with reductions in task performance. It limits creativity. It impairs other aspects of executive function, such as decision-making.

Q: Why focus on work? Loneliness is obviously something that affects other parts of people’s lives, too.

A: What’s striking about the workplace is people spend a significant amount of their time there. For people who may not have a lot of social ties outside of work, your place of employment can sometimes be your primary social circle.

“I think of loneliness as an epidemic because it affects a great number of people in our country but also because one person’s loneliness can have an impact on another person.”

Most people go to work wanting to enjoy their relationships with the people they’re working with, wanting to feel like they are contributing to something meaningful in the world. But that is not the experience many people have. Many people feel that the folks they’re working with are work colleagues, but they wouldn’t call them friends. They wouldn’t describe them as people they can trust. And there’s a real lost opportunity there, because when people have strong connections with the people they’re working with, that can not only improve productivity and the overall state of the company, but it can also improve their own health.

Traditionally we thought an employer caring about health was primarily about them ensuring an employee has health insurance coverage. That’s important, but it’s not the only aspect of health.

And we know loneliness isn’t always a state people choose. When people have diabetes we don’t say: “Why do you need medication? Why do you need to see a doctor? You should be able to suck it up and deal with it on your own.” I think of these as collective problems that we have to solve with collective solutions.

Q: What kinds of tangible, specific things do organizational leaders need to do?

A: What we need to do is create opportunities for colleagues to learn about each other at a deeper personal level. People want to be understood and appreciated as individuals who are more than a job. They are mothers and fathers. They are people with passions outside of work. They are community members.

I encourage leaders to evaluate the current set of conditions in their workplace. This is not about creating a new program or initiative. This is about changing culture, and that requires leaders to lead by example. You have to model what those relationships look like, and that includes demonstrating vulnerability.

I was at a well-known university when I was in office, and I asked an audience of 400 faculty and students the following question: “How many of you look at emotions as a source of weakness versus a source of power?” And nearly every hand went up. This is the paradigm we have to flip in this country.

Q: It’s powerful to hear a former surgeon general talk about “loneliness” as an epidemic. Why is it important to use that word?

A: For better or worse, people understand the language of epidemics. I think of loneliness as an epidemic because it affects a great number of people in our country but also because one person’s loneliness can have an impact on another person. This is not a condition that is developing in isolation.

I talk about this as an epidemic because it’s far more widespread than people believe, and like many illnesses that are related to our mental and psychological state, it gets swept under the rug and exists in the shadows. That’s why I speak about this with the urgency that I do.

This is a Washington Post article written by Jena McGregor. It was edited for length.